It takes more than brilliant stagecraft, though, to breathe new intensity into such an iconic script. To bring the tragedy to life requires first order acting chops. For this, Cooper has turned to some of the OSF’s top headliners – Danforth Comins as Brutus and Armando Durán as Caesar. She has also recruited a relative newbie, Jordan Barbour, in the pivotal role of Mark Anthony.

But for me, the standout performance was Ashland veteran Rodney Gardiner’s Cassius. No mere “lean and hungry” prisoner of envy, this Cassius, nor yet a self-infatuated showboat. Rather, he’s a canny, tough-minded defender of dignity and normative values – a true conservative, in the best sense.

Strategic and commanding, Gardiner presents a paradigm of committed Resistance. And yet his initial resort to violence entrains a civil war that dooms Rome to the very outcome – military despotism – that Cassius and his co-conspirators most feared. As the last of the sheetrock ramparts crumble, the “noblest Romans” inevitably go down “groaning under this age’s yoke.”

After a tableau of such bleakness, a little lightsome diversion might be in order. And what could be jollier than a couple of suicides and assorted ghosts romping through the De-Militarized Zone (DMZ) that divides North and South Korea, the likeliest fault line for the looming prospect of World War III? 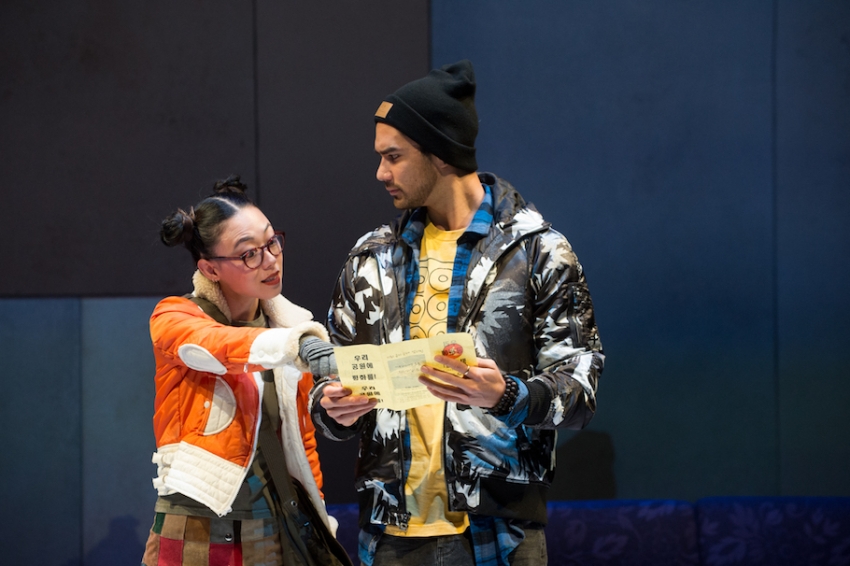 Yet that’s the offbeat premise behind tyro playwright Jiehae Park’s original script, Hannah and the Dread Gazebo. For her, the uninhabited – but tensely patrolled – no-man’s land of the DMZ symbolizes the whole range of “liminal spaces” that crisscross diaspora identities – the half-defined interfaces between Gen X and boomers, or Korean versus deracinated exile, or consciousness versus coma, or myth versus “news.”

In such zones, anything can happen – an open invitation to Park’s gaudiest tragicomic invention. Her Americanized yuppie protagonist (Cindy Im) is lured back to Seoul by ambiguous news of her senile grandmother’s apparent suicide leap into the DMZ. Over a strained dinner with her mother (Amy Kim Wasche), father (Paul Juhn) and kid brother (Sean Jones), she longs to penetrate the rootless urbanity of the modern city and the Confucian rigidity of her own family.

The others at the table feel equally stifled; they each embark on a private quest to break out of confinement. Brother takes up with a spitfire expat petition-monger (Eunice Hong). Mother attempts her own suicide leap and winds up hospitalized in a coma. Father wrestles with the opaque national security officialdom to find out what’s happened to Grandma’s body.

Sounds like a million laughs, right? But for Park, it’s an open invitation to comic invention. The comatose mother dream-stalks the DMZ, where she encounters a whole gamut of hallucinatory beings: everyone from her own suicidal mother to the late (and weirdly avuncular) North Korean dictator Kim Jong-il to a mythic tiger who narrowly missed out as primordial progenitor of the whole Korean race.

…and that’s just for openers in this year’s Ashland season. Up next, once the weather warms up in June, the outdoor Elizabethan Theatre will host three grand-scale extravaganzas: a stage version of Disney’s Beauty and the Beast musical, a sprawling retelling of Homer’s Odyssey, and – for those who will not have got their fill of Falstaff through the Henriad – Shakespeare’s airy bagatelle The Merry Wives of Windsor.

And OSF artistic director Bill Rauch, for his own 2017 directorial project, has chosen Off the Rails, a reworking of Shakespeare’s Measure for Measure set against the backdrop of a Pawnee Indian reservation, its Residential School and adjacent settler township.

Well worth a drive down I-5. But stick scrupulously to the speed limits and be sure your papers are in order.