Then there’s a pair of drastically different takes on immigrant dilemmas: a Chicano rendering of a classic Greek tragedy and a surreal send-up of the Korean diaspora.

But, so far, Ashland’s most lavish 2017 offering (and biggest crowd-pleaser) is a live-theatre adaptation of Miramax’ 1998 Oscar-winning blockbuster movie, Shakespeare in Love. Stripped of its Hollywood gloss, British playwright Tom Stoppard’s scintillating screenplay only gains added lustre in its translation to the Bowmer stage. 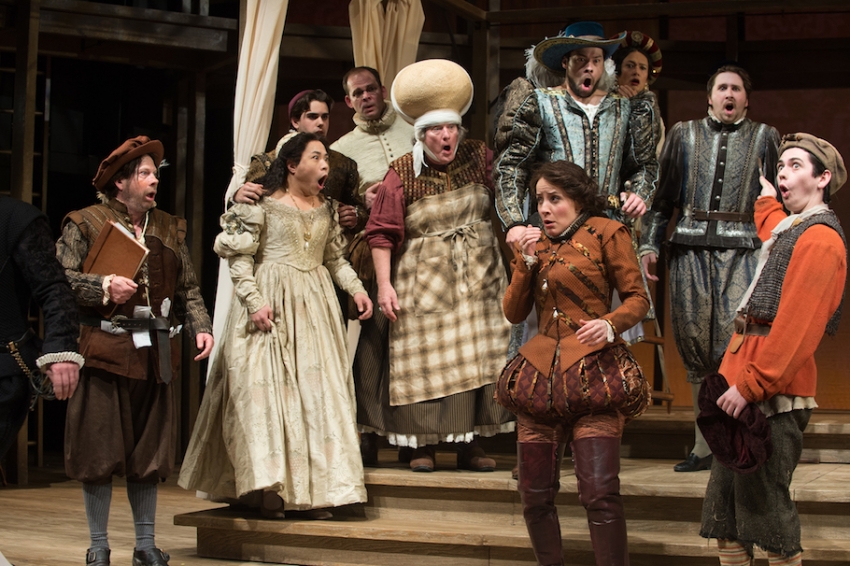 Much of the credit goes to writer Lee Hill. Under Stoppard’s guidance, he enriched the allusive script for a more Shakespeare-literate theatre audience. Then, too, the 20-member cast reads like an all-star line-up of OSF’s top headliners. Plus a dazzling pair of Ashland newbies in the leading roles: William DeMerritt as a tongue-tied young Shakespeare and Jamie Ann Romero as his cross-dressing love interest.

Set designer Rachel Hauck makes full use of the Bowmer’s assorted elevators, vomitoria and revolving stages. She further carves up the proscenium headway with ramps, catwalks and balconies. Under the magic of video designer Shawn Duan’s cyclorama projections, these subzones can become anything from roofscapes, to cathedral vaults to moonlit gardens to the foggy delta of the Thames.

The sheer density of bodies onstage and the sumptuous textures of wardrobe designer Susan Tsu’s creations turn the costumed crowd tableaux into scenic elements in their own right – living quilted curtains of rich brocade. Choreographer Jaclyn Miller keeps them gracefully undulating to the strains of composer David Reiffel’s score, as rendered by an onstage trio of Elizabethan period instruments.

But the primum mobile of all this exquisitely interlocking armillary stagecraft is director Christopher Liam Moore.

As both actor and auteur, he’s enjoyed free run of Ashland’s ample resources ever since Rauch, his long-time partner, took overall charge of the Festival. He’s turned this access to brilliant account, mounting definitive productions of Shakespeare and Tennessee Williams and performing a series of bravura star acting turns onstage.

But this production is his most ambitious, affecting and funniest effort yet. Pitch-perfect, impeccably timed and well worth braving the border to see.

For connoisseurs of Elizabethiana, Shakespeare in Love offers no shortage of allusive quotations. But, if you prefer to consume your Shakespeare in original, integral scripts, rather than diced up into bite-sized snippets, the OSF spring season serves up a pair of strikingly pertinent canonical Bard-on-the-bone history plays. 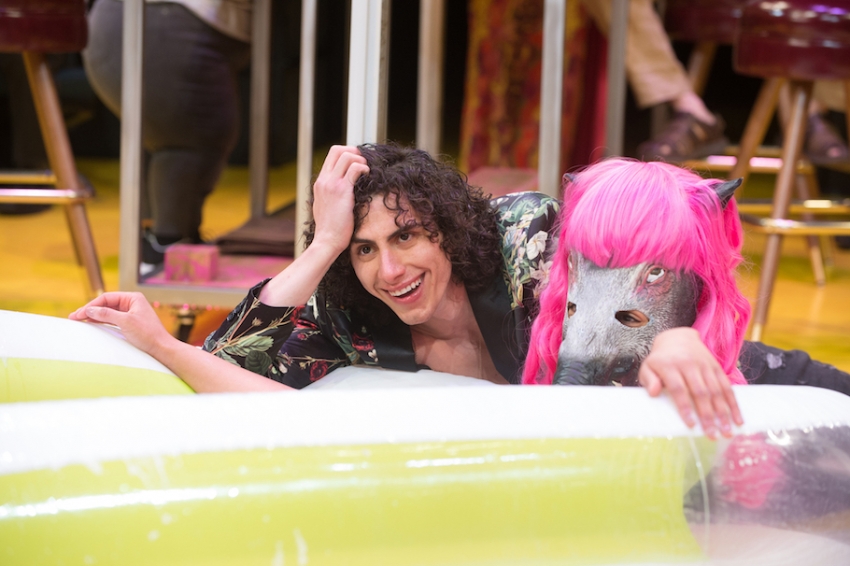 The title character in Henry IV (Jeffery King) is bit of a four flusher. Having scammed his way to the throne, he now faces revolts by his jilted allies. The real star of the show, however, is a bloated, narcissistic, truth-challenged, buffoonish blow-hard (Valmont Thomas) who staggers from one disgrace to the next, claiming victory at every stumbling step.

In the Shakespearean Henriad, unlike our latter-day Trumpiad, these traits are split between two distinct roles: the stately, guilt-wracked, paranoid monarch versus the irascibly amoral Sir John Falstaff. Poised between these two Big Daddy figures, England’s heir apparent, the wastrel Prince Hal (Daniel José Molina) coolly grooms himself to succeed to the throne.

His game plan is one of lowered expectations: the more he’s publicly despised as a lowlife Eastcheap consort of Falstaff’s, the more he’ll be esteemed when he redeems himself as a martial hero and filial son on the field of battle in King Henry’s final showdown with the rebels. And this can be accomplished in just one stroke by besting the rebel champion Hotspur (Alejandra Escalante) in single combat.