Molina brings off this bait-and-switch duplicity with elegant ease, equally convincing as a suave Jared Kushner in his court scenes and a profane gangsta cutpurse in the Eastcheap tavern. Thomas’ Falstaff, for all his endearing cynicism, is completely taken in by Hal.

“Thy love is worth a million,” he assures his princely crony. “Thou owest me thy love,” little dreaming that he’ll be callously tossed aside upon Hal’s ascension to the throne in Henry IV (Part Two), which plays in Ashland later this summer with Molina, King and Thomas each reprising their Part One roles.

Starting July 4, both of the Henry plays will be running on alternate days in the black box theatre, so that – with a certain amount of stamina – audiences can take in the whole sweep of Hal’s evolution from trust-fund slacker to reigning monarch.

Even the set (by Adam Rigg) will be substantially the same, except that the presiding backdrop mosaic of King Henry will evolve from a half-baked work-in-progress to a vaingloriously gilt wall-sized icon. Riggs renders the Eastcheap tavern with the louche allure of a Patpong go-go bar; his battlefields are starkly abstract, like parkour arenas.

Altogether 11 of Part One’s 14-member cast will carry over into Part Two.  One who will not make the transition, though, is Escalante’s Hotspur. She dies – rather elegantly – in the play’s climactic fight scene. The dynamic physicality of her performance, though, is not always matched by a nuanced diction in her spoken lines.

Bearing much of the play’s expository burden, Hotspur’s speeches can be long and convoluted – hard to square with such an impetuous character. Escalante’s solution, all too often, is to rush through her lines so as to get on with her headstrong action. Her task is made all the trickier by director Lileana Blain-Cruz’ decision to tap a female actor (her previous Shakespearean star turns in Ashland include Juliet and Miranda) for such a conspicuously macho role.

This odd choice called to mind an earlier OSF instance of gender-bending casting: Vilma Silva’s show-stealing appearance as Julius Caesar in the black box theatre a in 2011. That performance, with benefit of hindsight, now seems an eerily prescient depiction of conspiratorial long knives drawn against a feminine wannabe Imperatrix right on the verge of her ascension to world-spanning power.

But this year, even in the wake of the 2016 U.S. electoral debacle, gender is hardly the focus of the OSF’s latest Caesar remount. Rather, director Shana Cooper hones in on other issues, even more pertinent in these dark days of Donald-Dämmerung. Themes like: the malleability of the hive mind, the mutability of factions, the insatiability of power-lust and the slippery slope of political violence. 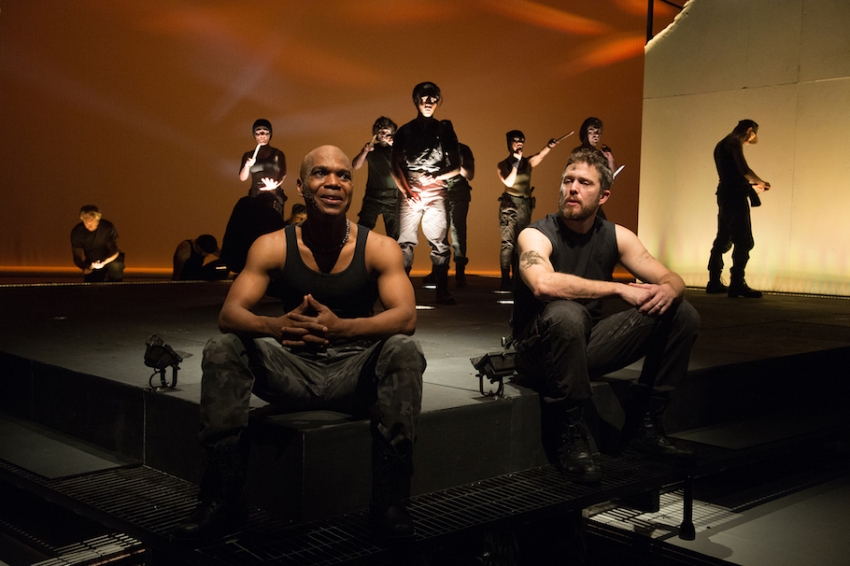 In broad outline, the background of Shakespeare’s play could be ripped right out of our latest headlines: clubby oligarchs recoil from a populist groundswell that looks set to transform their nominal republic into a military dictatorship.

No wonder, then, that the Rome of 44 B.C. evoked on the Bowmer stage bears a moody resemblance to Trump’s dystopian vision of “American carnage.” Storms rage, soothsayers sound alarms, lions whelp in the streets and ghosts stalk the land.

The imposing ramparts in Sybil Wikersheimer’s sets are all nothing but flimsy sheetrock, knocked full of holes in the course of the performance. Costume designer Raquel Barreto has tricked out the deplorable proles – the fickle mob of “friends, Romans, countrymen” – in eerie dittohead masks, like so many Mudmen of Borneo.