First in an occasional VO series on ethnic observances in multi-cultural Vancouver. 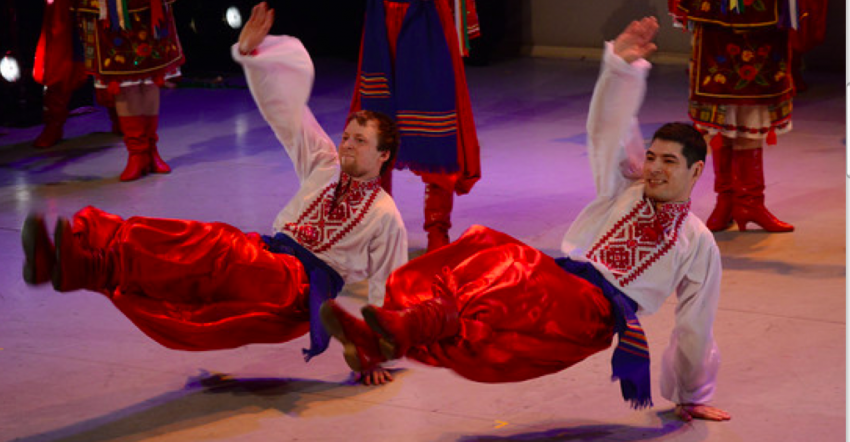 For all that it takes its name from an early Christian saint and its out-of-sync dating (two weeks after everyone else’s annual count-down) from the Eastern Orthodox Church’s Julian Calendar, there’s nothing sectarian about Malanka, the Ukranian New Year. At least not as it’s observed at the community hub of the Ukrainian Hall on Pender Street.

The festival is unabashedly pagan in its origins, a vernal death-and-rebirth rite. Most of the celebrants aren’t even pure-bred Ukrainians anymore, but rather just related by marriage and a proclivity for blow-out eating, drinking and mildly risqué merrymaking.

For openers, there was a buffet of herring and honeyed poppyseed cakes, inter alia, all washed down with free-flowing cherovna kalyna (vodka/cranberry cocktails). Next came heaping plates of cabbage rolls, sauerkraut, kasha (buckwheat groats), nachynka (cornbread pudding) and, of course, great slithering mounds of pirohy (cheese dumplings in potato-leavened wheat wrappers). Chef Bob Chitrenky and his volunteer crew had been sweating for days down in The Hall’s basement kitchen to compile all the carbs. 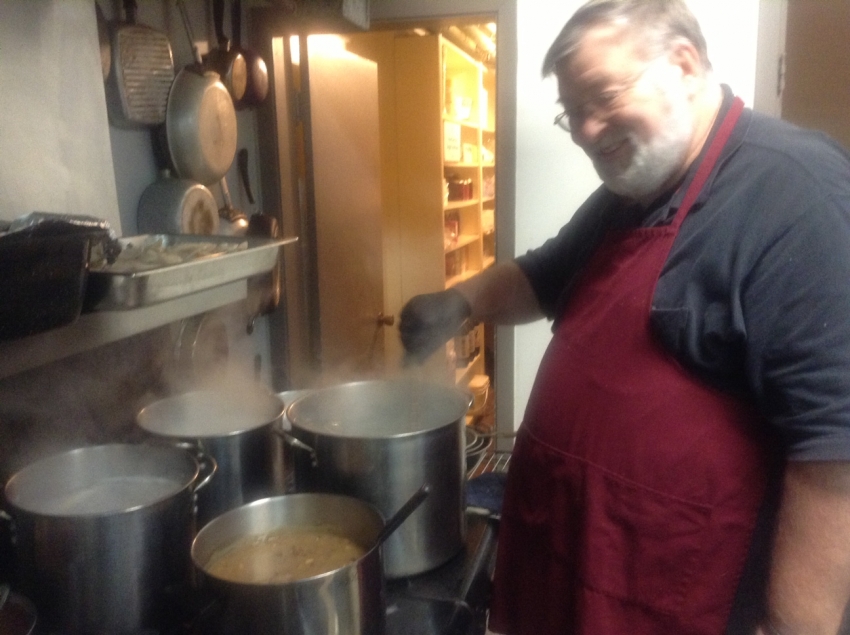 Chef Bob, the third Chitrenky generation to preside over the kitchen at The Hall. Photo: Hsu Mei-lang

Thus sated, the 100-odd paid up diners (at $50 per fundraising ticket) and almost as many assorted supernumeraries settled in for the show. It started sedately enough, with a procession of four adorably tow-headed children leading the way bearing an illuminated cellophane star lantern. (Back in the Old Country, this introit might have been more of a raucous mum-show, according to the program’s narrator/MC Libby Griffen: devil masks, cross-dressers, skeletons and crones.)

Behind them, choirmaster Beverly Dobrinsky led a 16-member ensemble singing their welcome in the intricately braided harmonies of traditional Ukrainian a capella choral music, rich in parallel fifths and octaves. The melodies are in ancient musical modes, neither major nor minor keys, lending the music a distinctive sweet-and-sour flavour.

The tempo picked up, though, once the dancers took the stage. To an upbeat recorded score, they kicked and stomped and high-stepped their way through a series of flirtatious routines. The costumes are gorgeous -- aprons and flare skirts for the girls (offering ample display of their frilly bloomers); sashes and flowing pantaloons for the boys. Everyone wears gleaming knee-boots and lavishly ornamented vests or tunics. All the costumes are locally stitched, but the embroidery has to be specially imported from Ukraine.

After a series of increasingly spirited mating dances, a wardrobe malfunction provided the highlight of the evening’s staged entertainment.

The story-line of the fateful dance routine was simple enough: a trio of maidens vie for the attention of solitary boy, but he’s only interested food. They cavort teasingly about the stage with a steaming bowl of dumplings. At last he manages to snag an outsized pirohy. He wolfs it down and springs up in an ecstatic high-jump.

Whereupon his pantaloons split at the central seam. He gamely carried on, leaping and kicking as best he could while fluttering first one hand then the other about his crotch, his deep red blush contrasting poignantly with his whitey tighties. The audience couldn’t get enough of it, stomping and clapping and whistling in time with the polka score. Exiting stage right, the pirohy bowl clutched to his waist, the male soloist (whose modest anonymity will here be respected, despite our admiration for his aplomb) earned a standing ovation and loud shouts of “Encore!”