Fringe Percussion in "City of Water; Sea of Glass" 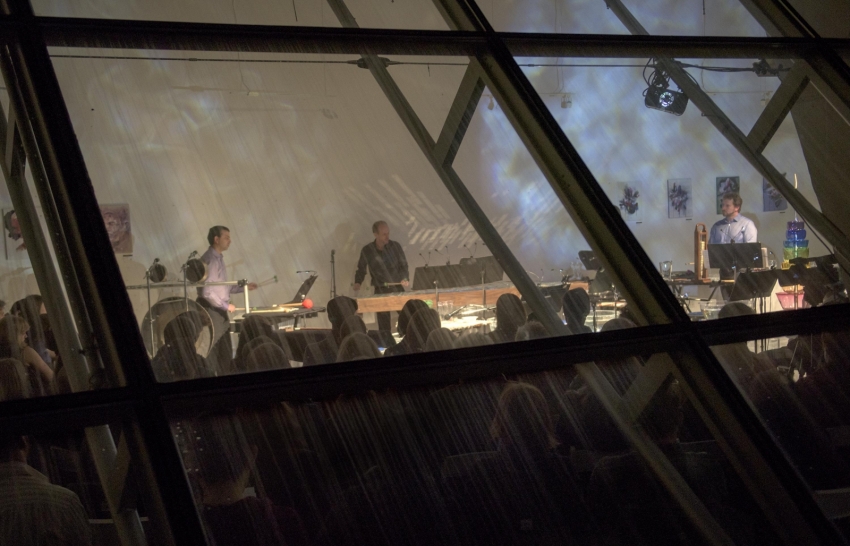 Part of the drenching was due to the cramped (but striking) venue that the Redshift Music Society so aptly chose for its City of Water, Sea of Glass concert: the prismatic atrium of Erikson's Waterfall Building in the shadow of the Granville Bridge. But it was the ingenious instrumentation that made for most of the splash. Half the time, the four musicians were up to their elbows in giant lucite basins full of water, splashing with sieves or sloshing marbles or sounding submerged gongs or plinking coins -- anything to generate novel, liquid sounds.

If you've ever watched a toddler in a bathtub, you've surely seen some such experimentation. But the Fringe quartet -- Colin Van de Reep, Brian Nesselroad, Martin Fisk and Daniel Tones -- went at it with a wholly adult, disciplined solemnity. This was no child's play.

For one thing, some of the instruments were fragile and expensive, one-of-a-kind commissioned pieces -- for instance Timothy Benton Roark's three-octave "chromarimba" with 93 keys, all of glass, or sculptor Robert Studer's tapering tree of glass bowls (by artisan glass blower Heather Konschuh) rising six feet high in seven tiers of calibrated diameters and pitches.

Then, too, the intricate interplay of harmonies and rhythms required the musicians' full concentration. Very little was left to improvisation in the evening's program -- these works were scored, with five of the Vancouver-based composers (Nova Pon, Christopher Reiche, Christiaan Venter and Mariah Mennie) right there in the audience to make sure the concert never missed a beat. Quartet members in mid-performance had to flip through page after page of sheet music (on waterproof paper, of course) to keep in step with each other.

Admittedly, some of the notation was, of a necessity, pretty original. Peering over the music stands during intermission, I noticed melodic lines scored for everything from champagne flutes to colanders. And some of the parts had to be written in ad hoc neumes (chromatically fluid note "shapes" rather than the pointallistic pitches of conventional modern notation), in line with the tone-bending proclivities of the slippery ensemble.