PuSh homestretch: a maximalist oratorio and a minimalist fugue

Recapping a century and rehashing a break-up 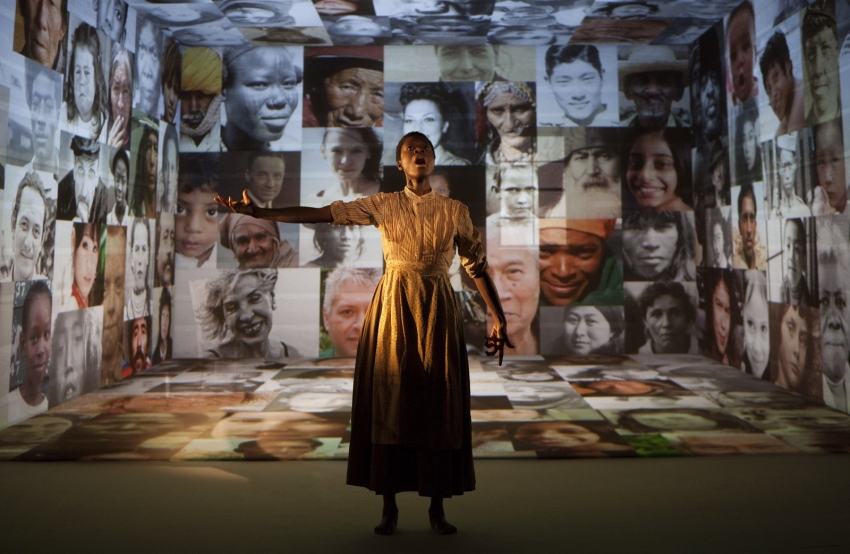 Neema Bickersteth is a supernally gifted soprano. Her galvanic voice outshines anything else onstage -- sets, costumes, accompanists, choreography, narrative context. All the more so when she's singing solo, as she does throughout the uninterrupted hour of her Century Song, which plays until Saturday at The Cultch's Old Theatre as part of the PuSh Fest.

She is also a strikingly graceful and elegant woman. But she is not, primarily, a dancer, nor a catwalk model to show off a series of costume changes.

She is blessed with considerable cultural capital in the Canadian arts scene and abroad. Her partner, Ross Manson, is artistic director of Toronto's Volcano Theatre company. The couple can invoke cooperation from the likes of choreographer Kate Alton, director of Crooked Figure Dances, or composer Reza Jacobs, or projection designers fettFilm of Germany, or scenographer Camellia Koo, or Dora Award-winning wardrobe wizard Charlotte Dean.

With such collaborators on call, small wonder that she should conceive of a sprawlingly ambitious project -- nothing short of a moral and cultural recap of the entire 20th century in the form of a multimedia oratorio, with herself as the sole performing presence onstage. (Two musicians support her from the shadows, stage right: pianist Gregory Oh and percussionist Debashis Sinha.)

At its core, the performance is a masterful concert recital of six vocalises, or wordless art songs, arranged in roughly chronological order. Most are by 20th century masters -- the late romantic Sergei Rachmaninoff, two by Catholic mystic Olivier Messiaen, plus one each by the mid-century iconoclast John Cage and the Franco-Greek avant garde pioneer Georges Aperghis. The final piece was specially composed for Bickersteth by her contemporary, Jacobs.

So far so good. And there's lots of other lovely stuff in Century Song, too: kaleidoscopic collages of ethnographic portraits; panning projections of cubist painting, deco architecture and Kathe Kollwitz woodcuts; vertiginous flyover animations; a green-screen "tunnel of time" montage of Bickersteth in a series of period dress and period-accesorized interiors; onstage real-time matroyshka wardrobe changes of costumes nested within costumes.

All rendered with wit, verve and finesse. Likewise the filigreed improvisations of Oh and Sinha to accompany the vocalises. Not to mention Bikersteth's own vigorous execution of Alton's rather angular choreography. But it all left an impression of polish and precision, rather than inspiration. There is a vast pool of talent assembled here; we look forward to seeing it more coherently channeled when it next comes together. Century Song, for me at least, never quite coalesced.

According to the program note, the object was to survey the 20th century through the lens of two linking narratives -- the experience of Canadian black women and Virginia Woolf's gender-bending, generation-spanning classic Orlando. These stories, though -- much less the grand sweep of the dazzling and dreadful 20th century -- remained somewhat obscured beneath all the fussy period decor.

The program note concludes with a punch line: "...a history lesson built of art, rather than facts, can be a powerful way to see into a life. Facts cannot tell you how it feels to be alive. Art can." Maybe so, but in this piece one sensed the art was not so much deployed to convey the life of the century, but rather that the history was pressed into service as a vehicle for a bit overmuch art. 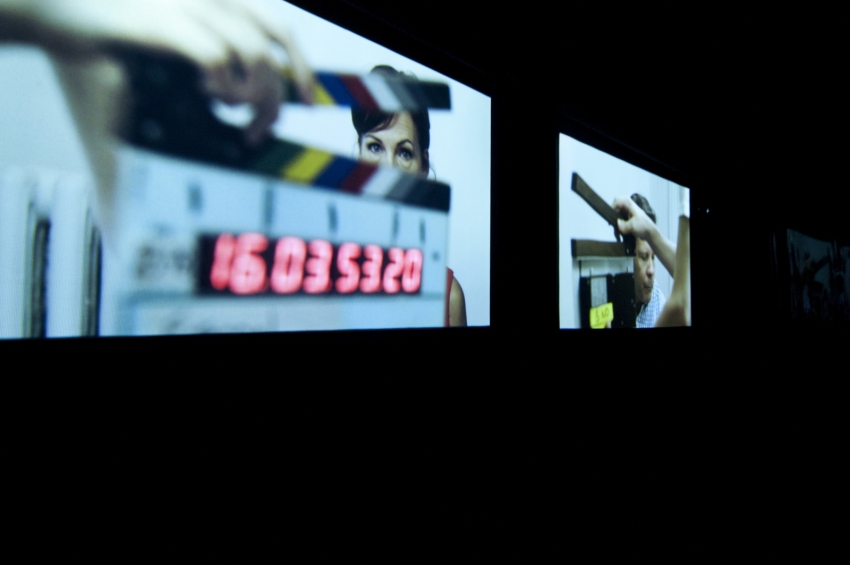 If Century Song is a tad overproduced, Daniel Fish's Eternal is austerely spare -- a recursive recital of the same five minutes of scripted dialogue some 23 times in the course of two unedited hours. The lines are rendered onscreen by a pair of genius actors (Christina Rouner and Thomas Jay Ryan) posed against featureless white backgrounds and staring straight into fixed cameras.

The performance is not, literally, eternal, although it sometimes feels like it. In fact its PuSh Fest run (at the Western Front on 8th Avenue) is all too fleeting, ending on Saturday (February 6th). Catch it while you can. It's not for everyone -- many bailed -- but it richly rewards those who stick out the whole two hours.

The halting, disjointed, grammatically scrambled dialogue is lifted from the final scene of the 2004 sci-fi rom-com Eternal Sunshine of the Spotless Mind. But, ripped out of context and untethered from any storyline, the words can be emotionally inflected any which way. Using nothing but phrasing, intonation, facial expression, posture and gestural tics, the actors render their five-minute playlet in every conceivable affective key -- rueful, raging, grief-wracked, snide, phony, stone cold, even campy. At one point, they wind up helplessly giggling. After awhile we sense it's not the actors reading the lines, but rather the lines uttering the actors.

The whole sequence was shot in one continuous take, so each iteration uses the previous round as a springboard -- all the more amazing how much fresh emotional turf Rouner and Ryan can traverse in any given segment. They're presented to the audience in full-frontal head shots on separate side-by screens, so it takes a few rounds for us to realize that they're actually filmed face-to-face, talking to each other.

Or are they? They sometimes speak in the first person, sometimes address each other in the second person, but just as often describe themselves and each other in the third person, as though relating not to an actual "other" in front of them, but rather to a memory or meme in their own minds.

And, after a few repetitions, the script in its word-perfect entirety gets wedged in our own consciousness, too, like an ear-worm. Line-by-line, we think we know what's coming, only to find ourselves ambushed anew by some wholly unexpected nuance of feeling in the well-worn script. It's like one of those excruciatingly embarrassing "why-did-I-blurt-that?" dialogues one compulsively parses ad delerium for new depths of humiliation or some glimmer of exculpation.

The text seems to be about the end of a romance, but it's an ending that's never allowed to end. And the lines get so ingrained in us that they almost become our own, so that even after the screens go dark we can go our ways enacting fresh variants of our own upon the scene. Eternal, indeed.