PRFF lights up the screen in Powell River 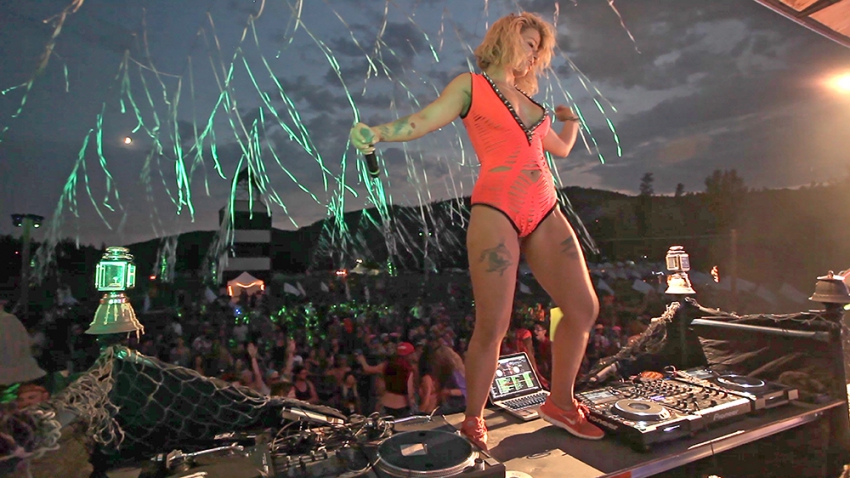 Blondtron performs in the documentary 'Amplify Her' at the Powell River Film Festival.

The Powell River Film Festival (PRFF) is set to light up the screen at the historic Patricia Theatre February 12 to 18, 2018. In its 17th year, the Festival is infamous for the diverse selection of world-class films meticulously programmed over the course of 13 screenings.

The Patricia Theatre, Canada’s oldest continually running theatre, is situated in the Townsite neighbourhood, a designated National Historic District in Canada. Townsite is a glowing example of a Garden City town, influenced by the Arts and Crafts movement and its focus on location and architectural style of the homes, parks, green belts, commercial buildings and recreation facilities – a humanist approach to building community.

PRFF brings current, critically engaging cinema to this historic scene. The film program delivers the best of local Powell River filmmaking together with films from around the world, and British Columbia. One of last year’s visiting directors, the acclaimed Nettie Wild, describes the experience as “the best example of cinema becoming the village well”, and she thanked the community “for showing this city girl such a good time.”

The film selection is the result of a collaborative effort by the programming committee – a small group of filmmakers & film viewers, who chose films based on merit and availability – while being mindful of inclusion, diversity, and indigenous concerns.

This year’s guests and performers are as diverse as the film program. PRFF’s opening film is the critically acclaimed The Florida Project, described by top critic John Beifuss as “Heir to the traditions of Huck Finn, the 'Our Gang' shorts and other tales of feral children”. The party preceding the film features music by local band SoSiDo. Randy Murray (of Bachman-Turner Overdrive fame) describes them as “a stylistically eclectic band in the polka/zydeco/skiffle vein.”

Shut Up and Say Something is Melanie Wood’s touching documentary of acclaimed international spoken word artist Shane Koyczan, who awed the world with his breathtaking opening ceremony performance at the 2010 Winter Olympics. Melanie will be in attendance, with The Powell River Public Library organizing a live Poetry Slam with local poets before the screening.

A special late-night treat is the screening of Amplify Her, co-directed by Ian MacKenzie and Nicole Sorochan. Nicole will be in attendance at the film screening. Amplify Her asks the deep question “What does feminine expression look like, if women feel free and safe to express themselves?”

In the course of answering that query, Amplify Her profiles three electronic dance music artists battling demons from their painful pasts to emerge as beacons in the global festival scene. An after-party follows the film with local creative beacon, Autumn Skye Morrison performing as DJ Skyelight.

The closing party is a celebration of local talents. Kayak to Klemtu, by indigenous director Zoe Hopkins, was produced, in part, in Powell River. In addition to starring Tla’amin Nation talents Ta’Kaiya Blaney & Evan Adams, the production of the film engaged Powell River crews and students. Ta’Kaiya describes her personal mission – “I will dedicate myself to saving what is near my heart, and the heart of my culture, by transforming words into actions and actions to results.”

PRFF is honoured to have Ta’Kaiya Blaney perform her music with her long-time accompanying guitarist Aaron Ross before the film. The Tla’amin Convenience Store’s Sli City Grill will cater the reception.

PRFF promises to engage, entertain, and challenge viewers. This February, make Powell River your winter destination on the Sunshine Coast. Stay at the lovely reimagined Old Courthouse Inn, savour the culinary delights of the fine restaurants in town, and take flight with the fine selection of local craft beer at the Townsite Brewery.

There’s so much more to discover at PRFF. For film details, trailers, and tickets, visit prfilmfestival.ca. See you at the movies!

Enter to win The Powell Film Festival excursion package The Excursion Package includes a pair of tickets to our Saturday night party and screening on February 17 of Kayak to Klemtu with a live performance by Ta’Kaiya Blaney. The evening begins at 6pm and is catered by the Tla’amin Nation Convenience Store’s delicious Sli City Grill and has a cash bar. Tickets for our other Saturday screenings are available if your schedule permits. The package includes 1 night’s accommodation at the Courthouse Inn; and return transportation for two via BC Ferries.