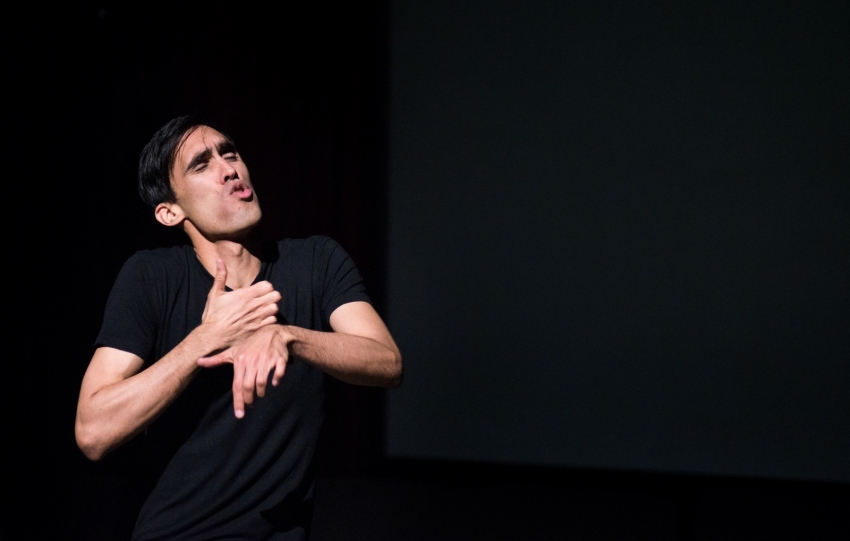 Pity the hard-pressed Anthropologoyim tribe of Outer Academia. Bereft of grant funds and verifiable results, wordless song has long been their last-ditch Happy Hunting Ground. After all, such music can "mean" whatever you want it to.

In Anthropologies Imaginaires, protean polymath Gabriel Dharmoo lays out a veritable potlach of songs-without-words for these scholarly starvelings. The show ends its two-day run at Music on Main's flagship Fox Cabaret today. So PuSh Fest gleaners still have one more night to gorge on Dharmoo's vocable delicacies -- a chance not to be missed.

In the course of the evening Dharmoo solos onstage, rendering the wild and wonderful mouth music of a series of remote and nearly extinct tribes. Projected on a screen behind him, a quartet of academics smugly deconstruct the performances (in French, with subtitles), offering background details and zany critical analysis.

Needless to say, it's all made up -- both the "experts" and their field subjects. Yet the spoof cuts uncomfortably near the bone. The straight-faced theoretical twaddle perfectly captures the bland self-assurance of a seminar room. And, with his body language and vocal acrobatics, Dhamoo presents an uncannily plausible human response to the surreal dilemmas of these hypothetical primitives.

And what predicaments they face!

There's the insectivorous tribe that's evolved a whole repertoire of clicks, hums and whirrs to invoke the bugs on which they thrive. There are the desert-dwellers so thrilled at any windfall oasis that they plunge face-first into its pools to sing bubbling aquatic arias. (Too bad this couldn't be included in Redshift's recent watery farrago). There are the members of a hermaphroditic sub-caste that have learned to sing stylized basso-falsetto duets with themselves, somewhere between kathakali and Chinese opera.

There's the sex-obsessed shame culture whose males, after every coitus, must purge any lingering succubi with a twitching, gagging and retching "preemptive exorcism." There's the band of once wild -- and loud -- nomads that are now dragooned into wage slavery and reduced to furtively singing between gritted teeth. There's the avant garde tribe that has independently evolved 12-tone music.

There's the hocking dotard, last remnant of an all-but-vanished race, hobbling through a bleak windscape muttering half-remembered arpeggios. There's the scat-singing, finger-snapping, smirking dudester (much praised by the "experts" as an intercultural success story) who jiggles and jounces through a paroxysm of Muzak cliches.

Then there's the tribe that lets itself be hypnotized into choral singing (Dharmoo recruits his whole audience into this role) as a back-up band for its wailing, hectoring shaman. Of course only the shaman is aware of this "most egomanaical" form of singing, notes one of the "experts," since everyone else on the scene betranced and unconscious. Sort of like a Trump rally.

Physically, Dharmoo is endowed with the perfect instrument to bring such visions to life. He's a lank-limbed, rangy Gumby of a man in a black tee-shirt and slacks, so that only his face, throat and arms stand out against the black box background of the cabaret stage. It's a lantern-jawed of infinitely malleable features. Eyes so deep set that, when closed, you feel they introspect straight into his gut. Hands like thigmotropic tendrils that wrap around his melodic line. When he essays something like Tuuvan throat-singing, his neck tendons and Adam's apple become mesmerizing choreographic elements in their own right.

Dharmoo comes by his vocal virtuosity honestly, training as a musicologist at Montreal's Conservetoire before apprenticing under traditional masters in South India and Vietnam. At the age of 34, he's already racked up an impressive array of performance and composition awards, but thisshow marks his theatrical debut and his first stab at script-writing.

Born to a Trinidadian father and a Quebecoise mother, he's been naturally open to variegated world music since childhood. But he has only this year embarked on its formal study in an interdisciplinary Concordia University PhD program that combines music, theatre and -- you guessed it -- anthropology. Still, true to his professedly "post-exotic" convictions, he roundly rejects the implicit condescension of old-school ethnomusicology.

No such compunction troubles the show's on-screen "experts." Between scenes, we see them buffing and polishing and repositioning their specimen, Dharmoo, like a taxidermic trophy in a museum diorama. It's only at the very end that we learn their supposed credentials: a deconstructionalist professor of Comparative Religion, a globe-trotting Life Coach, a retired cardiologist who now conducts golf-and-wine tours and a government Minister of Assimilation.