Visit Pages Two through Four for a sample of Stephen Collis' striking poetry that chronicles a country's struggle against tar sands expansion. 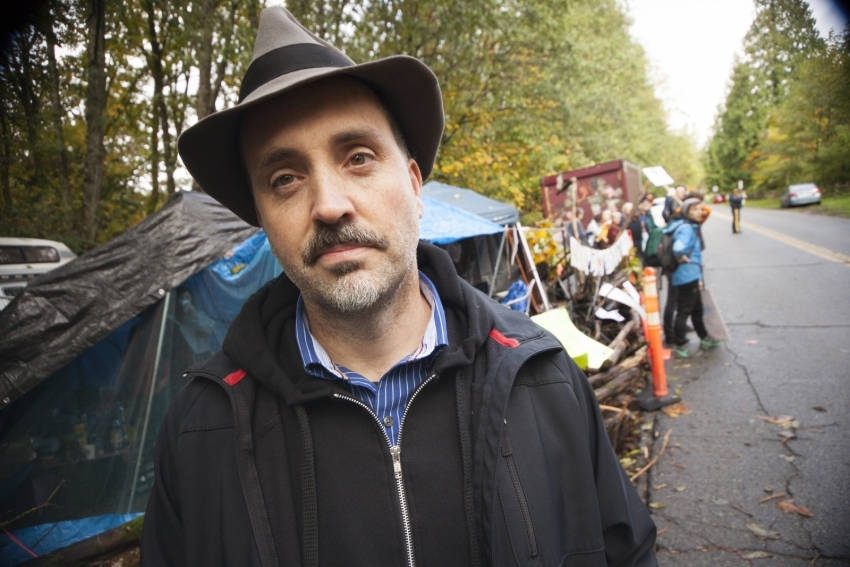 Two years ago on Oct. 30, I was served (along with four other people) with a court injunction and a $5.6-million lawsuit. This was, to put it mildly, a bit of a shock.

I had been working with many others to raise awareness about, and indeed, to do what I could to stop Kinder Morgan’s proposed Trans Mountain Pipeline expansion. And the company was charging that I had “conspired” against its interests.

At a time when the science of climate change had become nothing if not crystal clear, the construction of new fossil fuel infrastructure — and thus the expansion of climate-warming carbon emissions — struck me as a colossal historical irresponsibility. Add the opposition of local First Nations and the cities of Vancouver and Burnaby and, well yes, my moral outrage was at its peak.

I would like to say that hearing my writing quoted at length in court, from behind the bulletproof glass of a courtroom constructed for the Air India terrorism trial, was 'instructive.' Mostly it was simply alienating.

At one point, after reading a blog I had written, Kinder Morgan’s lawyer told the court that “underneath the poetry is a description of how the barricade was constructed.” My “poetry” had become evidence.

Before all this I had been writing a book of poetry about walking in the Anthropocene — walking along pipeline routes and proposed pipeline routes, and the strange and threatening paths they cut through our environments. It included walking through the Alberta tar sands and the alien “environment” created by that complete removal of every land formation we might recognize (it is, amongst other things, the construction of a vast desert in the middle of the boreal forest).

There is a tradition of descriptive landscape poetry, celebrating the beauty of the natural world, which I wanted to update for an era in which we have the capacity, and it would seem the tendency, to completely destroy certain landscapes.

My book, Once in Blockadia, published this August by Vancouver’s Talon Books, is still about these things. But it is also something of a poetic documentary of the struggle against the pipeline on Burnaby Mountain in the fall of 2014. Some of the facts are there — even some actual documents — but mostly I find poetry is best at digging into motivations, into the feelings driving us to act and resist.

Poetry has always been a lover’s art; but it can express all kinds of love—love for community, for place, for another possible world—and those other strong social feelings: outrage, anger, hope, solidarity.