V.O.'s "Faust" gives Devil his due 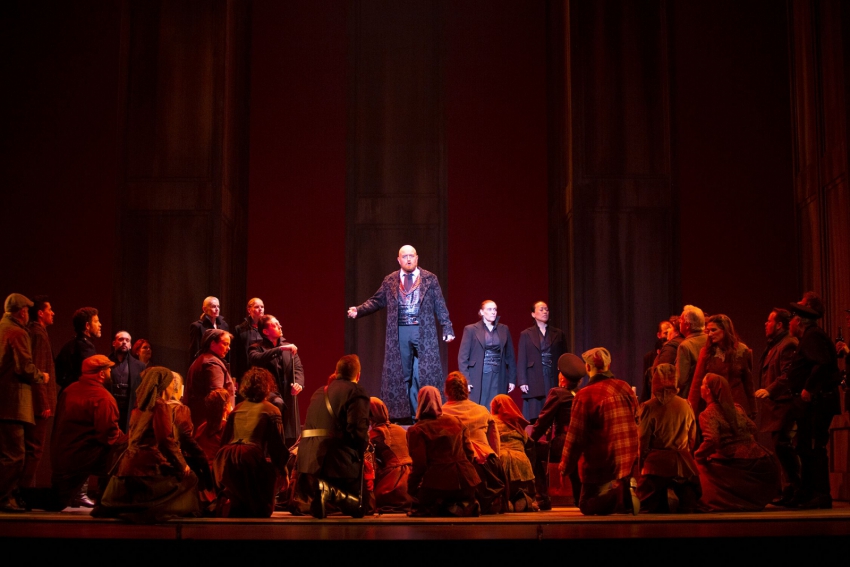 Earth tones dominate the Vancouver Opera’s staging of Charles Gunod’s Faust, in keeping with the sombre plotline of the two-and-a-half-hour adaptation of Goethe’s celebrated verse drama. The sets and costumes (by Dominique Guindon and Olivier Landreville, respectively) are borrowed from the 2012 Montreal Opera production.

But it’s the lighting, by Vancouver’s own Gerald King, that brings it all to lurid life. Stark sidespots project ominous shadows clear across the stage. Backlit cycloramas create illusions of shadowy depth. Overhead spots cast cones of light through the dust motes raised by the 50-member cast.

At stage centre, one most prominent vertical beam slices right across the proscenium and apron right into the orchestra pit, highlighting the snowy mane of British conductor Jonathan Darlington (remember him from last year’s Onegin?) as he pumps Gounod’s lush – almost over-ripe – harmonies out of the 57-member V,O, Orchestra.

Gounod was something of a radical in his mid-19th century prime, but radically conservative. Against the then-prevailing tide of blowsy romanticism he was an early apostle of the Bach revival. A devout Catholic, he parsed the sacred music of Palestrina. His best-known work, aside from Faust, remains his ubiquitous setting of the Ave Maria; he also penned the Vatican’s national anthem.

Much of his music strikes me as off-puttingly predictable, almost trite. But at least Darlington limns the melodic sweetness of the score without burying it in the potentially turgid orchestration. In this he’s greatly helped by a dazzling all-Canadian trio of lead singers.

Newfoundland tenor David Pomeroy, in the title role, flaunts the vocal chops that have landed him star-billing in Europe, Asia and Latin America. Vancouver’s own Simone Osborne brings a supple soprano to the role of Marguerite as she morphs from dream icon to chaste ingénue to fluttery inamorata to pariah “fallen woman” to guilt-wracked penitent to murderess to half-mad convict to her deathbed absolution.

But the show-stealing performance of the evening was Torontonian bass-baritone Robert Pomakov as Satan. No horned, sulfur-reeking ghoul, he, nor yet a deep cosmic nemesis. This is an urbane, cane-twirling Méphistophélès in a silk kaftan and silver brocade waistcoat as shiny as his shaven pate. Pomarov plays him with plenty of swagger.

He evinces no particular metaphysical drive; he collects souls simply as a sort of hobby, like a lepidopterist collects moths. No reason, then, to be squeamish about collateral damage. To Satan, Marguerite is merely  a bait to trap Faust. If, in the process, he can damn her, too, so much the better.

But if Gounod’s Méphistophélès is no more than a flashy pimp and panderer, that makes Faust no more than a randy, wordy, wavering John – a far cry from the proto-Nietzschean Übermensch that 19th century Germans liked to see in Goethe’s protagonist. Richard Wagner, for one, wrote his own far more heroic rendition of the Goethe text and, to this day, Gounod’s version – when it is staged in Germany at all – goes by the name Marguerite rather than Faust.

Director François Racine does what he can to wring extra resonance out of the script and score. For instance, when Marguerite’s brother and his brigade return from foreign wars, instead of playing the celebrated Soldier’s Chorus as a straight-up triumphal march, he limps his choristers onto the stage as a troop of bedraggled stragglers whose women hardly recognize them.

Or in Marguerite’s prayer scene, he peoples the aisles and transepts of his implied cathedral set with silent, sinister, hooded figures. (Priests? Devils?) Or in her climactic Ange Purs, Anges Radieux aria, he steers Osborne upstage into a pure white light that transforms her pitiable jailbird fright wig into a radiant backlit nimbus of transfiguration.

Such touches help allay the sometimes stiff acting of the co-stars. But most of all, it’s their voices that more than compensate for any theatrical shortfalls. They’re magnificent vocal instruments, all three, and meld perfectly with the polished V.O. orchestra and the masterful conductor. This magic mix runs once more on Sunday – well worth taking it in.