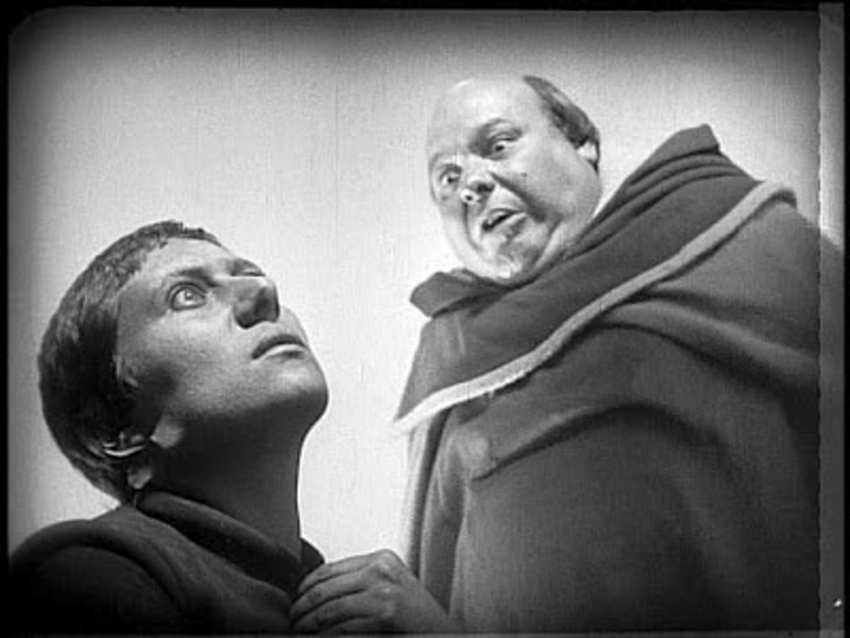 In the gloom of the Cathedral, the image of the Saint fills the apse as the a cappella voices of the five male celebrants reverberate right up to the vaulted rafters. Aside from the incandescent icon, the only other light is the flickering glimmer of the choristers’ hand-held missals. Early Music Vancouver (EMV) votaries get to go full-on medieval Friday night, January 31st, but with some distinctly modern touches.

The gothic wooden vaulting will be our own Christ Church Cathedral’s. Instead of stained glass, the incandescent saintly icon will be the projected moving black-and-white close-up of tragic French starlet Maria Renée Falconetti in the title role of Danish cineaste Carl Theodor Dreyer’s 1928 silent film, La Passion de Jeanne d’Arc. And in lieu of illuminated breviaries, the choristers of the Orlando Consort will be singing from hand-held tablet computers.

The iPads are crucial to synch up the vocal mosaic of 15th century liturgies and courtly love chansons with the minutely calibrated cadences of Dreyer’s masterpiece, according to Consort co-founder Donald Grieg. He created the son et lumière amalgam back in 2015, combining his twin passions of film and medieval music.

He entitled the work Voices Appeared, after Joan of Arc’s own synaesthetic description of how she communed with assorted  saint and angels, as per the meticulously recorded minutes of the 1431 canonical court that tried her for heresy and burnt her alive.

Those minutes form the basis of Dreyer’s script, although he telescopes the whole weeks-long courtroom proceeding, torture and execution into a single day for a more impactful narrative that self-consciously mirrors the Passion of Christ.

Likewise, Grieg chose his accompanying music through an equally meticulous balance of research and drama, as he related to the Observer in a mildly jet-lagged interview the day after flying in from London.

For over half a century, after its original print was destroyed by fire, La Passion de Jeanne d’Arc could only be seen in murky offprints derived from surviving negatives. These versions were usually accompanied by a belatedly tacked-on soundtrack of baroque snippets.

Dreyer hated this score, once telling an interviewer that he’d rather screen his film in chaste silence. Why, at least, he plaintively asked, couldn’t it be paired with music from Joan’s own era?

The answer was obvious in Dreyer’s mid-20th century milieu, Grieg points out: not much was known back then about the provenance of medieval music or how it might have sounded. But a lot has changed since.

First, a pristine, positive print of the film turned up in 1981 (in the janitor’s closet of a Norwegian mental asylum, of all places). And meanwhile, archeo-musicology had advanced to the point that we now have a granular roster of named medieval composers and solid performance guidelines.

So Grieg was able to authoritatively zero in on music that would have been composed – or at least performed – within the appallingly narrow window of Joan’s 19-year lifespan: 1412-1431. That still left him with a rich palette of moods, sources and allusive texts to match Dreyer’s quick-cut editing style, scene-by-scene.

For instance, as a leitmotif for Joan’s own appearances, he recasts De tristesse, a Gautier Libert chanson, repurposing the anguish of a lovelorn troubadour into the anguish of a martyr Saint. For her ascent to the scaffold, he ironically reprises the hymn Veni creator spiritus, which had been chanted by her retinue of monks on her triumphal march to raise the siege of Orléans two years earlier.

For the torture scene, he uses Richard Loqueville’s Sanctus – no saccharine “Holy, holy,” as Grieg describes it, but rather a “rhythmically vital song … full of hocketing and virtuosic triplet runs.” When Joan is bled to revive her from a swoon, the scene is synced with Johannes Reson’s Ave verum so as to shock us with the word sanguinis just as her vein is lanced.

The score is liberally laced with such allusions. But there’s no need to catch all – or any – of the references to get swept up in the drama, pathos and exaltation of Voices Appeared.

While the piece is hardly an oratorio, the Consort deploys its voices to personify the film’s characters. Countertenor Matthew Venner highlights most of Joan’s scenes (“a man singing in a woman’s register; an apt reversal of The Maid’s cross-dressing generalship,” Grieg notes). The two tenors, Mark Dobell and Angus Smith, feature in angelic visitations.

Grieg himself sings the lowest register in the Consort’s core quartet, in a voice he self-deprecatingly characterizes as a “wimpy baritone.” But, for Voices Appeared, the group has specially recruited a full-on bass, Robert Macdonald, “to inject the right note of extra menace,” Grieg explains.

By the time the chandeliers dim and the screen lights up Friday night in Christ Church Cathedral, North American audiences will likely have already had their fill of kangaroo quasi-judicial proceedings with foreordained outcomes. Compared to the current U.S. Senate follies, Joan’s 15th century Inquisition might come off as a paragon of jurisprudential deliberation and dignity.

At least in Voices Appeared, though, you can count on a more uplifting live soundtrack. Don’t miss it.