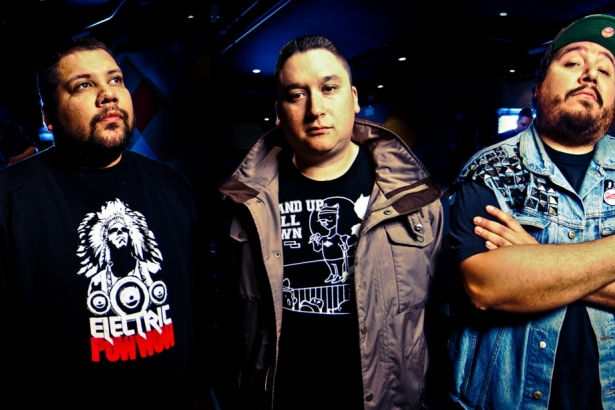 Although I am a big fan of A Tribe Called Red’s music – which has been described as powwow meets hip-hop – I definitely had a very specific idea of what their show was going to be like. Given that ATCR is a first nations hip-hop/DJ trio from Ottawa, I figured that I would be one of the only white kids at the show. I couldn’t have been more further from the truth and have never been prouder to be so wrong.

What I didn’t know before stepping foot in the Commodore was that the night – which was dubbed by host OSTWELVE as “Salish Coast Live” – was one big giant protest against the pipeline – mainly Kinder Morgan – and one big middle finger to Prime Minister Stephen Harper. Because of this, it was one of the most varied audiences I have come across recently: old people, young people, white people, native people, straight people, queer people, and more. It was also a night where art and politics converged, where music was used as a weapon, and as healing, and where pride was front of centre.

It was also a night where I had some of my best interactions with people. A conversation with a half-Cree girl got me thinking about culture, history and my own person ancestry. When she asked me where I was from, I replied Canadian. Thinking I was native, she asked me what tribe I was. I clarified that I was not a First Nation of any kind but was born in Canada. After telling me that to be ‘Canadian’ means to be native (a point I actually agree with to a certain extent) she repeated her initial question.

The actual music portion of the night was amazing. There were great openers – more on those in a later post – that were culturally diverse, yet also shared the same activism-through-music ideological spin that the night was about. The Commodore’s dance floor was packed and the crowd was in a rave-like mentality. I think I saw one chick dance for about three hours straight. I even found myself moving side-to-side and was subsequently dragged into a quasi-conga line by a friend of mine. (I often try to remain as objective as possible during shows and thus try to remove myself from the action, but at a venue like the Commodore that is not always beneficial or possible).

Unsurprisingly, given that it was a hip-hop-esque show, the term warrior was thrown around. The slogan on my new bandana even says ‘warrior up’ – it was a bargain at $5. We have to warriors for the environment, warriors against capitalist corruption and stand with the stewards of our land – the Salish people of greater Vancouver and the Coast of British Columbia. It is time to take action.

While DJ and trip-hop music is not always my thing, I do enjoy A Tribe Called Red because of their original spin. It is traditional electronic music combined with rap and native culture (Such as tribal chants). Yet people across all races and cultures are embracing it in droves. They have twice been longlisted for the Polaris Prize and recently won a Juno, the first time a first nations group won a Juno in a non-native music category. They are ambassadors on multiple levels. Through their music, A Tribe Called Red takes on a journey, and on this Friday night it was for something that affects everyone.