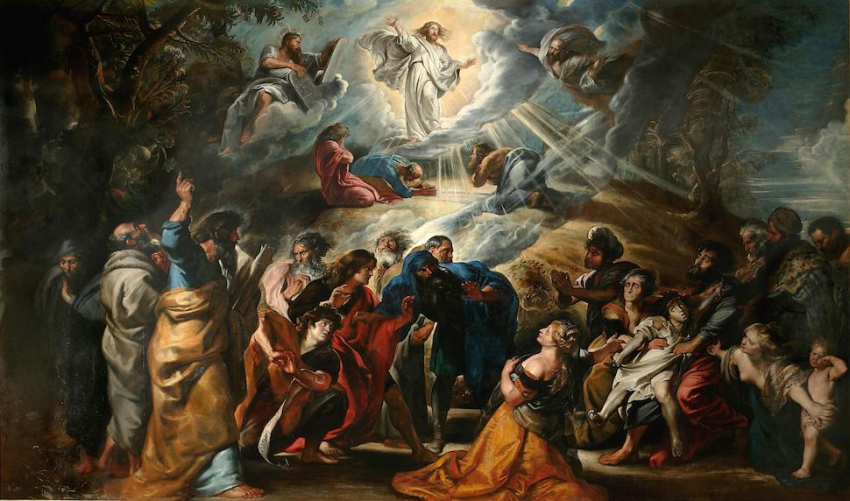 In the run-up to Halloween, Vancouver’s avant garde Arkora and Redshift Music ensembles have shivered our timbers yet again with round two of their seasonal benchmark “Transfigured Light” soirées.

What made the recital so haunting was not just its graveyard venue: Mountain View Cemetery’s brutalist, acoustically perfect Celebration Hall. Even more spine tingling was the concert’s menu of 10 pieces – seven of them world premieres – all very different in tone, text and inspiration, but sharing in common a penchant for “microtonalities.”

These are interstitial semi-tones between the customary notes of the “well-tempered” scale, for a total of 31 tones to the octave rather than the conventional 12. To the untutored ear the result can seem a bit chilling – downright Halloweenish, in fact. But once you acclimate, the expanded range brings out unsuspected nuances in the music.

Still, microtones take some getting used to, not just for audiences but also for the ensemble’s 16 top-flight musicians, recruited from all across North America. No mean feat for Arkora co-founder and conductor Kathleen Allan to meld the group into  a cohesive whole with just a couple of days of full-ensemble rehearsals and such a challenging repertoire in the unfamiliar microtonal idiom.

For vocalists, drummers, cellists and violinists, at least, the challenges are more conceptual than technical; they can elide tones at will once they shed the strictures of classical training. But the 12-tone scale is built right into the structure of a fretted guitar, say, or a piano keyboard. And, when it comes to idiophones, Arkora/Redshift co-director Benton Roark, Allan’s creative and conjugal partner, had to invent a whole new instrument, the “lumiphone,” to accommodate the extra tones.

It’s more than twice the size of a normal vibe set – about as big as a putting green – and entirely made of glass. Jonathan Allen, who spent most of the evening frisking up and down the macro-marimba, reports “it’s virtually invisible when you’re standing over it. I play it mostly by muscle memory.”

No instruments embellished the concert’s opening piece. To break us in easy to the 31-tone octave, the eight Arkora vocalists led with an a capella rendering of a four-part organum from the 13th century, back when semitones still flourished in Western music. The piece, by Pérotin “The Great,” is built around a drawn out plainsong “drone” in the bass register, which the upper three registers elaborately ornamented with microtonal melismas.

Still in relatively subdued mode, programme segues into a homophonic rendering of a medieval courtly love poem, l’Amour de Moy (“within a tender garden”). The three female voices braid the voluptuous (but chastely allegorical) lyric so languidly that you’d think we were still in the world of ornamented medieval plainsong.

But in fact this is a brand new, world-premiere piece by McGill professor Jonathan Wild. Its cutting-edge contemporaneity clicks into focus when Allen and fellow-percussionist Daniel Morphy chime in with a scintillating, understated lumiphone accompaniment.

Alongside his original music, Wild nurtures a research interest in pre-modern antecedents of microtonality, with a special concentration on the 16th century composer/theoretician Nicola Vicentino. We’re next treated to a snippet of a four-part Vicentino madrigal – as challenging to audiences in his own time, according to contemporary accounts, as much of microtonal music can be to uninitiates today.

Which brings us to the more overtly challenging mid-section of the concert, starting with the world premiere of Tova Kardonne’s Temper, Temper. The title’s a play on words. It alludes to Kardonne’s conscious disruption of the artificially even temper of the canonical 12-tone scale. But it also admonishes an out-of-the blue temper tantrum; the suppressed rage unleashed against us when we’ve “borne the brunt of angers not of [our own] making” – an experience all-too-familiar to us lib-tards nowadays.