"Transfigured Light" at end of the tunnel

Arkora and Redshift fiddling in the graveyard 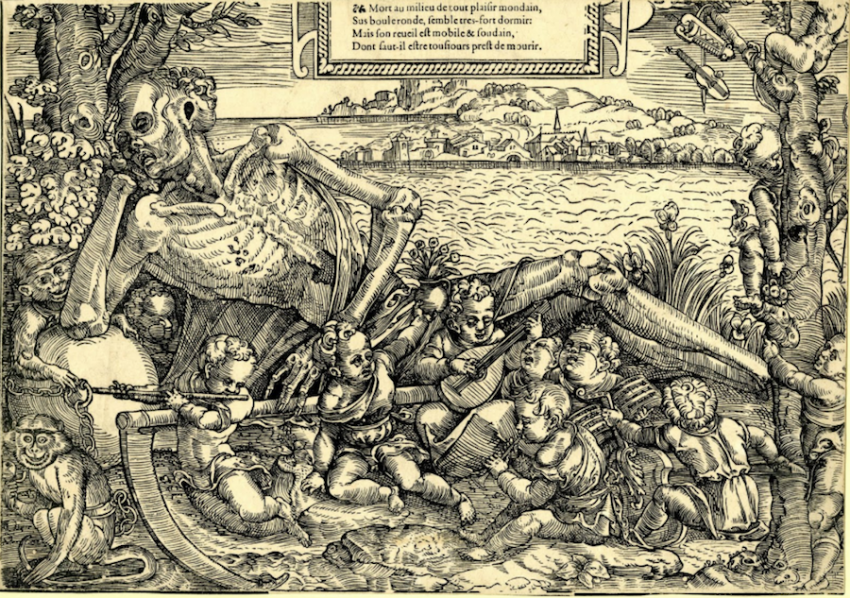 Death – like most Redshift Music Society concerts – is always definitive and usually a one-off episode.

The group’s latest soirée, “Transfigured Light” by Redshift’s avant garde music collective Arkora, was no exception. It was, to my mind, the standout event of Vancouver’s spring music season. And you won’t get another chance to experience it again; it won’t be repeated, at least in its original form.

After an intermission, the second half was given over entirely to Pulitzer Prize-winning composer David Lang’s song cycle “Death Speaks,” as rendered – with eerily consolatory sang froid ­– by Arkora’s other co-director (and Roark’s wife), Kathleen Allan.

Death, sure enough, was one of two main themes underlying the programme. The other was more narrowly musicological: the use of “micro-tonalities,” a richer, denser spectrum of pitches than the 12 semitones per octave favoured by most “conventional” Western music.

Both concepts, after a bit of acclimation, need not seem so daunting. Death, as presented in the texts and scores of the Arkora selections, appears not as a frightening maw of oblivion but rather as a portal to peace and transfiguration. And microtones, widespread in Asian music, now enjoy more of a vogue in the West than they’ve known since the 16th century, largely due to the technical possibilities of new instrumentation as pioneered by groups like Redshift.

Two such instruments of Roark’s own invention figured prominently on the Arkora stage: a micro-tonal glass marimba and the “Rainbow,” a stack of multi-hued resonant crystal bowls. But, arguably, the most compelling “instrument” of all was the concert venue itself – the Celebration Hall of Vancouver’s iconic Mountain View Cemetery.

Redshift has a track record of uniquely apt novel locales for its one-off performances, ranging from North Van’s Break Head Tank to Arthur Erikson’s Waterfall Atrium.  Mountain View’s glass-and-concrete memorial chapel fit right into this lineage, admirably resonating with the gentle thanatopsis of the texts as well as the rich microtonal acoustic palette and the “transfigured light” of the spring sunset.

Late afternoon light flooded the empty stage through the chapel’s seven-metre West-facing window as the choir -- singing, unseen, from the back of the hall -- opened the programme with an a capella microtonal motet from the 1500’s.

Then, as the nine choristers (recruited for the occasion from throughout North America) and five musicians (guitar, piano, cello, violin, keyboard and percussion) filed to the front of the chapel, the score shifted seamlessly to the ultra-contemporary, world-première tones of Randall-Myer’s cutting-edge “New You,” an original paean to the pathos and poetry of cell-death.

Another motet and then another première: Dorothy Chang’s haunting take on a T’ang Dynasty court lady’s tearful remembrance of a lover “forever gone.” Tearful eyes figured as well in the next two Renaissance motets before Arkora concluded the first half of the concert with two strikingly hopeful première pieces by Roark.

In his rendition of Percy Bysshe Shelley’s elegy to John Keats, Roark lingered on the concluding line of his chosen excerpt: “No more let Life divide what Death can join together.”

And then he segued straight into a vigorously uplifting setting of a page from John Muir’s travel diary, “The Yosemite.” In this passage, Muir builds up to a kind of quasi-religious out-of-body experience in which the mountains “seemed not clothed in light, but wholly composed of it.”

In the Arkora concert, bass-baritone soloist Dashon Burton evoked Muir’s description of “the flush of alpenglow” just as that fleeting phase of sunset lit up the panorama of North Van snowcaps shining through the Celebration Hall windows.

After so many near-death experiences, no wonder the Redshift wine bar did such a brisk intermission business. By the time we filed back into our seats, a meditative dusk already pervaded the chapel – perfect for our ensuing face-to-face encounter with Death in person.

The “Death Speaks” song cycle was composed as a coda to Lang's celebrated 2008 “Little Match Girl Passion.” In the original oratorio, Lang had used a series of unsentimentally minimalist tropes to home in on the suffering of the titular protagonist in Hans Christian Andersen’s darkling fable. But in the coda, he adopts a different tone, closer to the eloquent fluidity of Schubert lieder.

In fact five texts -- first person love songs in the first-person Voice of Death -- are drawn directly from Schubert, as translated by Lang himself. Soloist Allan, in her statuesque composure and commanding soprano, impeccably embodied the icy compassion and sleek sensuality of the song cycle's eminently human Death persona.