A tipsy disposition made for an often hilarious emcee 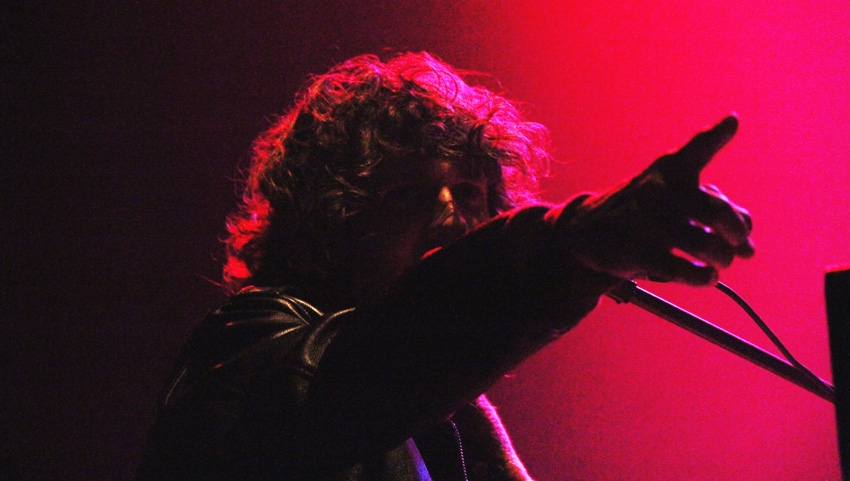 TJJ spent as much time chatting as he did playing; no one was opposed

“Hey, these guys are pretty good,” muttered most of the early-comers to Saturday night’s Rickshaw concert — their eyes and ears picking up the subdued temperament of Brooklyn indie-electronic trio Wet. While most of the concerters were getting their first exposure to the group, Wet’s smart blend of rippling beats and airy vocal-work surely seduced some fresh fans.

Submerged in an aqueous lightshow, siren Kelly Zutrau carried Wet through their alluring yet understated opening set. As they finished, so did the understated portion of the evening, for who next should appear marching down the aisle of pilling theatre seats but a clamourous five-piece marching band.

Five members from the band Duk — Tobias Jesso Jr.’s current backing band — went through a few flourished gypsy jazz tunes before waltzing up to the stage. There, joined by guitarist Cary Singer, they proceeded to play the wobbly honky-tonk theme to Curb Your Enthusiasm as a very tall and equally lanky Jesso Jr. sauntered over to his piano. 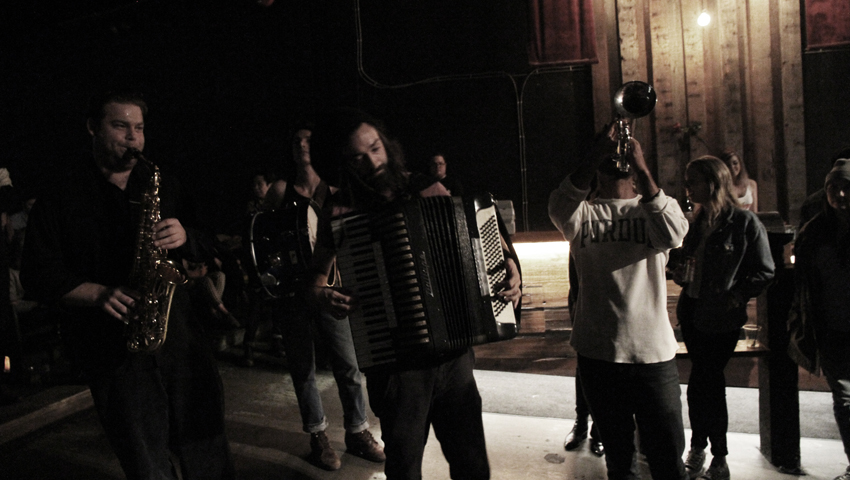 it's not a party until someone whips out an accordion

Smiling ear to ear and holding a stout glass of amber liquid, the loquacious host of the evening exuded bashful comfort: Clearly swept up in his surreal world of recent success, though completely connected to his audience. “You know all these songs were home-grown in Vancouver, except this one – just kidding,” joked Jesso Jr. before trailing into Ram-era Paul McCartney analogue “Can We Still Be Friends.”

If you didn’t know, it took a string of disheartening circumstances – a failed attempt at a songwriting career, a breakup, a hit-and-run bike accident, his mother’s cancer diagnosis – to bring the former Sessions bassist back from L.A. to his parents’ North Vancouver basement. (His mother, who was at the show, has since recovered.)  It was there that he began to play the piano (at age 27) and now, three years later, we have his excellent debut Goon, a timeless ebony-and-ivory portrait of an old soul forever losing and finding itself.

But the tone on Saturday was far from sombre. An admittedly tipsy Jesso Jr. took every opportunity to tell stories, dole out friendly digs to his bandmates or ask the audience for input. At times he polled the peeps for song choices and musical styles to play them in, eventually culminating in a hysterical metal version of “Tell The Truth” (which lasted for all of 30 seconds before he cut it off, chuckling, “this is offensive”). 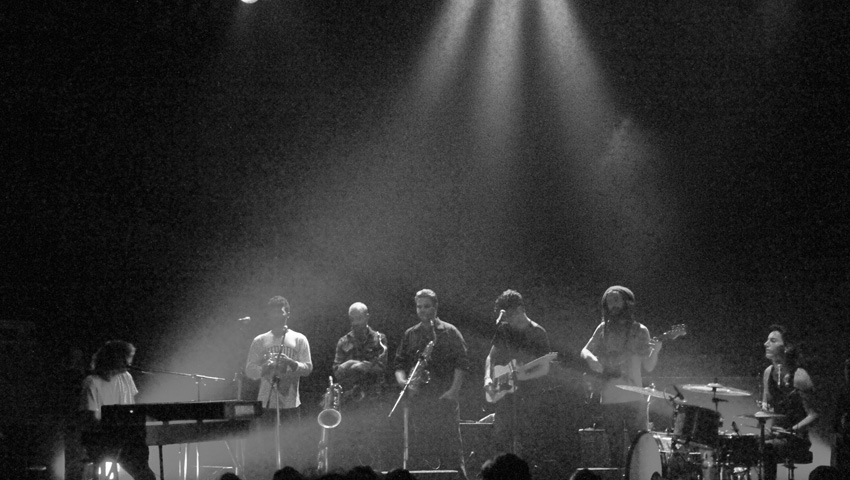 the fanfare adds a welcome baroque-pop dynamic to TJJ's songs

“I’m sorry if the atmosphere is a little too loose for you . . . but that’s how we roll,” Jesso Jr. answered to explain his own antics. And although he often rambled, his songs never suffered in the slightest.

All the sung emotions remained intact, showing off the charisma that has helped him make the right industry friends, like Danielle Haim, who have since helped him along his musical way.­

Tobias Jesso Jr.’s upswing isn’t ending anytime soon. He recently co-wrote a song with Sia and his personal hero Adele. Also, look for another collaboration with Adele on her album 25 (working title), scheduled for release on November 20.

watch the video for "How Could You Babe":