Friday’s show testified to the difficulty inherent in delivering Swans’s songs to their live potential.

On Friday night, Vancouver’s Venue Nightclub became the grounds for what could be called a rock concert, but was closer to an amplified congregation. With decibel deliverance as their method, two bands acted as mediums for the haunts entangled in the very soul-guts of the willing assembly.

Carla Bozulich began the rite with her harrowing breed of avant-garde noise rock. The veteran fringe artist’s March 2014 LP Boy sadistically toys with her notion of a “pop” record. Genres are always only a reference point, and in Bozulich’s case “pop” distinguished the feverish blues march of “Deeper Than The Well” from the menacing waves of “Let it Roll” (unreleased). The latter saw her main percussionist opting to contort an electrified saw in perfect dissonance to Bozulich’s processed moaning. 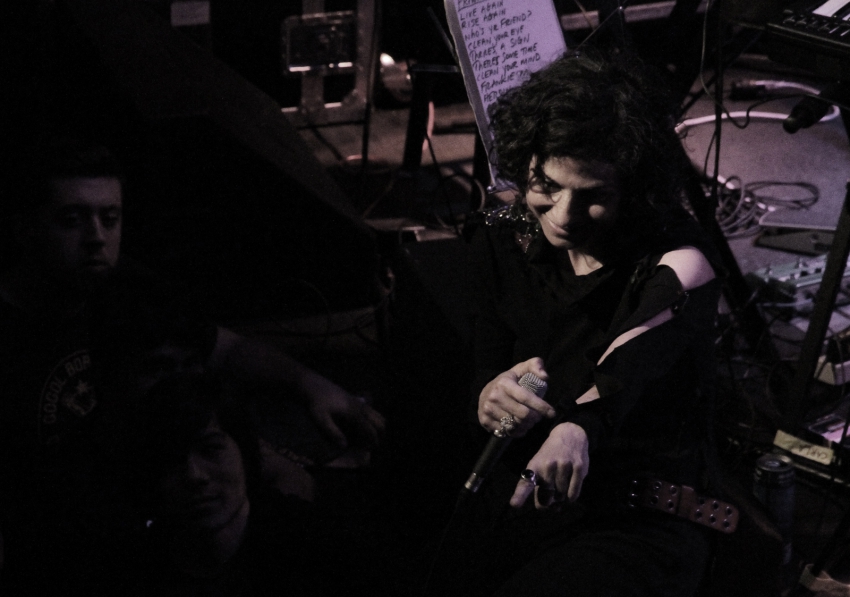 Carla Bozulich spoke softly between songs, but her performance was unhinged.

Bozulich’s trance of terror progressed into full possession in her last number. For “One Hard Man” she descended to the patronal pit: An epileptic delivery gripped her trembling frame while her hands gripped the shirts of a few emasculated men. Bozulich signaled the coming of Swans by savagely yelling directly into the unabated air.

Swans are most widely recognized in their post-2010 incarnation of six musical compatriots. (A group of friends is a first for the project, apparently.) But the prolific, Michael Gira (no, not “JEE-ruh” it’s “jer-AH”) –led brand released ten studio albums in the period 1983-1996 before dismantling. Although some of these records were lauded by the underground and critical communities of the time, many consider 2012’s The Seer and this year’s To Be Kind as its career-defining work. Swan’s current mode of apocalyptic post-rock is a shaman with a bludgeoning tool: transcendence by blunt trauma.

That being said, there is nothing brutish about Swans’s brutality. The evocative power of their music hinges on a delicate, cooperative balance of its performers. Unrelenting repetitions of often singular chords resist any reliance on structural progression for musical cues. Gira channels the energetic component of the compositions and conducts his bandmates, with varying results.

Friday’s show testified to the difficulty inherent in delivering Swans’s songs to their live potential. Even their mere notoriety for loudness—the merch table was giving away free earplugs, warning of possible “nerve-damage”—caused a mortified speaker to blow before they started playing.

The concert crescendoed to its climax, “The Apostate,” a 20-plus-minute monument beginning with, and perpetually infected by, the sustained howling of Christoph Hahn’s lap slide. Hahn, on Gira’s right, wore the stern features of a modern Beethoven, whose bursts of frenetic tremolo transformed him into Mark Jones’s Leprechaun. The song built steadily on the swash of cymbals and low-end lurches from the bass; at the halfway point Gira ran-jumped across the stage, landing on pummeling shots en masse; finally releasing into a driving groove for Gira’s heretical barking: “we’re on a ladder to god . . . space cunt/ brainwash/ space fuck!” 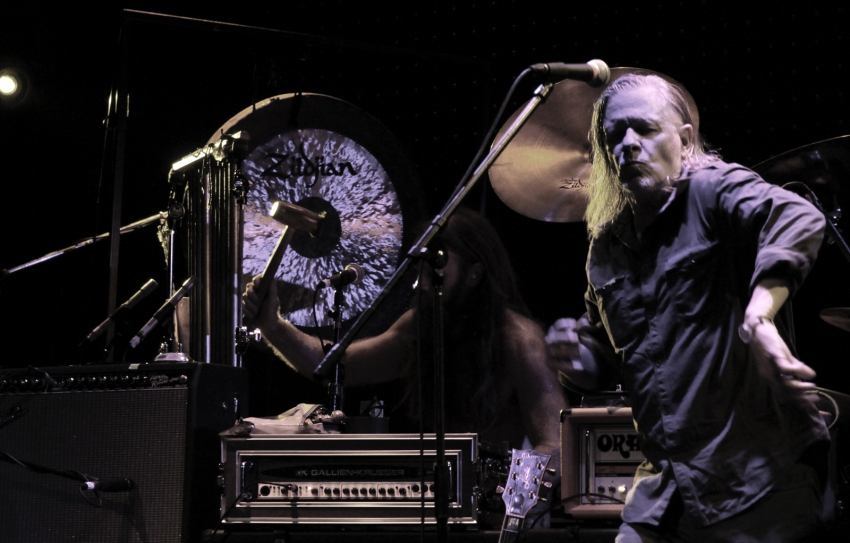 Thor Harris hammered away in his percussive workshop, adding textures for the directive Gira.

Regrettably, essential lines of communication diminished at times. Gira made gestures that were not always understood by some of his bandmates, leading drummer Phil Puleo to look visibly confused. These misunderstandings manifested in lack of pulse and dynamic movement, especially in “Don’t Go” (unreleased).

But the overall effect was never lost. An entranced sea of swaying heads oscillated with Swans’s rhythmic enchantment, and eyes remained transfixed to the slick grey hairs and flapping arms of its figurehead. The evening ended with the audience—temporarily cleansed of the malignant, diurnal demons of monotony—heartily applauding the sweaty crew, not ceasing until “Margaret Thatcher” (Gira) introduced his bandmates one-by-one and departed the stage.