Salsa with a dash of duende 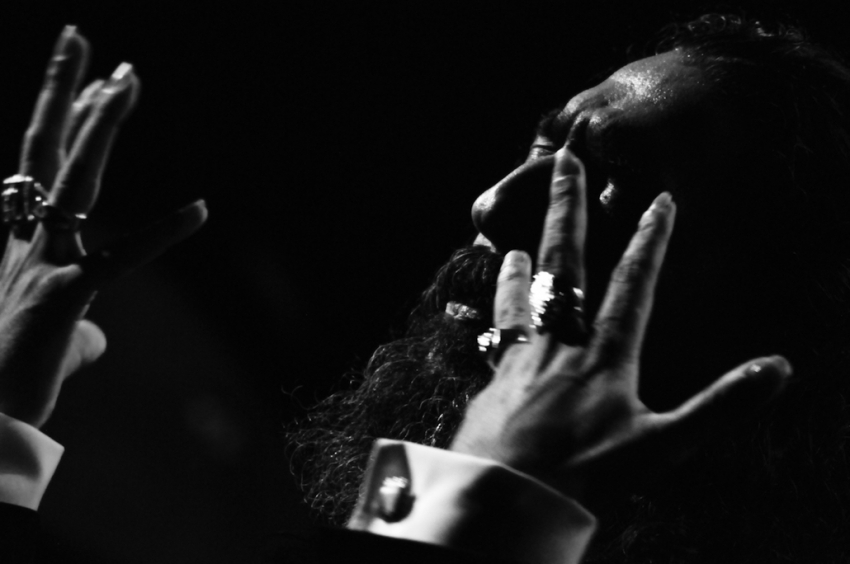 I don’t know what they put in his orange squash, but in the course of his latest Chan Centre tour de force, Diego Ramón Jiménez Salazar (“El Cigala” to his worldwide fan base) went through five tall tumblers of it.

And with each deep draught, his music got wilder and freer, delving further into his Romani soul, his flamenco roots and the ample talent pool of his 10-member combo.

Not that the two-time Latin Grammy winner was ever exactly staid to begin with. After the instrumentalists had arrayed themselves on a dais, El Cigala drew a prolonged ovation from the packed house as he swept in with a toss of his leonine mane and a wave of his bejewelled fingers.

He perched on a stool, downstage centre, screened from his band-mates by a head-high acrylic barrier. The brass-heavy ensemble (two apiece of trumpets and trombones) struck up a tightly scored salsa, propelled by the harnessed percussive power of David Marcano’s timbales and Daniel Diaz’ congas.

To heighten the sense of control freakery, back-up singers Diego Giraldo and Giovanni Betancourt jounced along to the beat in hyper-coordinated choreography. Bassist Yelsey Heredia provided muted continuo while cheering everybody on with nods and smiles.

The only instrumentalist who seemed to enjoy any improvisatory latitude at all was keyboardist Jaime “Jumitus” Calabuch, hunkering behind his grand piano with proconsular gravitas. But even Jumitus had to keep his eye firmly fixed on Diego, who was clearly the master and commander of this ship.

And indeed El Cigala carried himself like a captain – kind of a pirate king, all ruffles and ringlets, alternately shooting darkling glances and toothy grins all around.

The look suggested a baritone, so it came as a bit of a surprise when he actually lifted his voice in a reedy, somewhat nasal tenor. Yet that turned out to be the ideal instrument for the kind of music he makes: sustained upper register riffs on the underlying orchestral motifs, like a trapeze artist cutting shines way up there in the rigging of the tune.

Two or three such numbers and he already had more than a dozen young Vancouverites bobbing and swaying to the beat in box 243-A. And by his second tumbler of orange squash, El Cigala had plucked a score of concertgoers out of their seats and into an impromptu mosh pit down in the aisle at the foot of the stage.

Whereupon he switched from salsa into ballad mode, at which he proved equally adept. Eclipsing the orchestra, Diego sang not-quite-a-capella but lingering alone with the soulful melody. Rings and bracelets glinted as he wrung the poetry of the multi-clause lines with a flutter of palmas (flamenco hand-claps).

It made me wish I had enough Spanish to follow the way he drew out the phrases. Behind  me a row of Gypsies from the Western Canadian Romani Alliance cheered El Cigala with shouts of “guapo!” and “lindo!” One of them paraphrased the lyric as an homage to the late Amparo Fernandez, his wife of 25 years and long-time manager, who died, all too young, in 2015 of a sudden onset cancer shortly after the couple’s last Vancouver appearance.

But the tone was anything but mournful; more of a tender love song. And the lyricism carried through to the next movement of the Chan concert (orange squash tumblers three and four), when he dismissed all the instrumentalists but Jumitus for a series of vocal/piano duets. Calabuch more than held his own, festooning the score with great fronds of arpeggios and octave-spanning chords.

By his fifth tumbler of squash, Diego summoned back the orchestra and finally breached the acrylic barrier to circulate among them, according solo opportunities.

His stage name, “El Cigalo,” translates as langoustine, a kind of gaunt crustacean like an overgrown crayfish. And that’s just how he looked picking his way across the dais to alight upon one after another of his band-mates.

They all outdid themselves, basking in the maestro’s approval. And then, astonishingly, they swapped places, performing virtuoso turns on each other’s instruments.

By this time, the whole Chan Centre crowd was on its feet swaying along with the frenzy onstage. The audience couldn’t get enough: three encores before Diego finaly drained the last of his orange squash.

Langoustine turns out to be the preferred ingredient for the Spanish Gypsy version of scampi, a rich stew with butter and garlic. Delicious with just a taste of salsa picante.

Riding the 'hood with Little Red