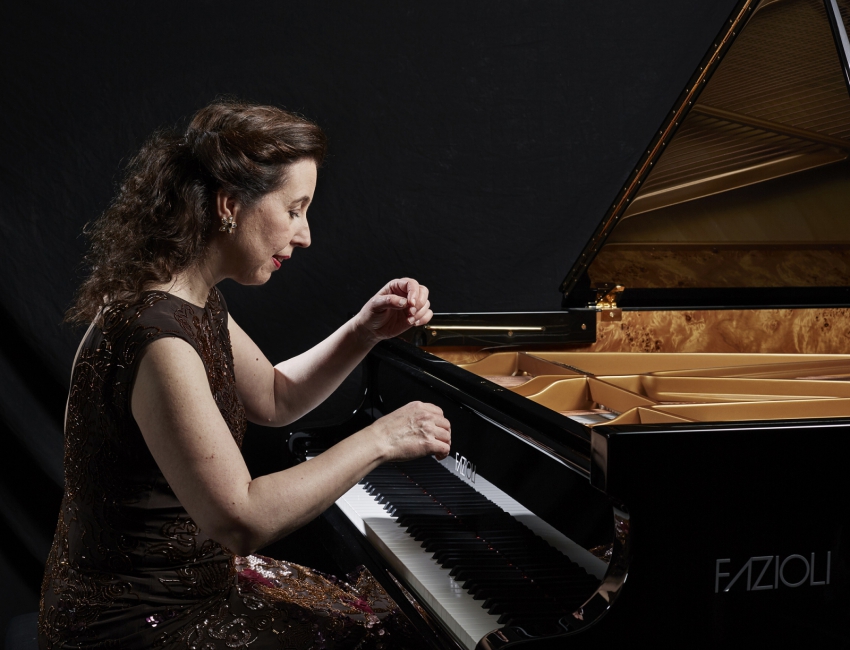 Hands quicker -- and subtler -- than the eye. Photo: K. Saunders

Harpsichord or piano? Which instrument is definitive for interpretation of Johan Sebastian Bach’s keyboard masterpieces?

Piano partisans long held Glenn Gould’s bravura, lightning-fast recordings (1955 and 1981) of the Goldberg Variations as the ne plus ultra. But then along came Gould’s fellow Canadian, Angela Hewitt, with a 1999 rendition clocked in at nearly an hour and 20 minutes, half again as long as Gould’s pyrotechnics.

And now Hewitt has re-recorded the 32-piece cycle in a fine-honed 2015 edition that bids fair to become the new gold standard. It was this more mature version that Hewitt performed for a packed Chan Centre audience of Early Music Vancouver (EMV) aficionados.

Harpsichord, of course, still has its devotees. EMV even dabbled on that side of the debate when it invited harpsichordist Davitt Moroney for an erudite lecture/demonstration on the Art of the Fuge at the 2016 Bach Festival.

Bach himself, of course, was a harpsichordist. He never saw a piano; it wasn’t invented until 100 years after his time. With its dual registers (versus the single 88-ivory keyboard of the piano), the harpsichord allows for clearer contrapuntal delineation. of lines. And its full range of semitones (versus the rigid half-tone interval of the piano) adds an extra dimension of melodic nuance.

So, compared to the needle-sharp tonalities of the harpsichord, the piano sounds “mushy” to certain purists, better suited to the romantic “bathos” of a Liszt or Chopin than the chaste baroque of Bach.

Ah, but the dynamics! The peaks and troughs, crescendos and diminuendos, shadings and sparkles, romps and sulks; that’s where the piano shines, and Hewitt deployed this dynamic range to full advantage in her Chan Centre recital. And if you’d only ever heard her before in recordings (as I had), seeing her live on stage added an extra dimension of depth.

That’s one key way she differentiates herself from Gould, who for most of his professional life performed strictly on disc. Hewitt is right out there with us, at risk in “real time,” exposing all the strains and triumphs of her technique and the full play of feeling for the whole marathon exercise.

Sitting down at her keyboard, she seemed to merge with her Fazioli grand (her instrument of choice) into some sort of seamless, compound, chimerical creature. It looked like she never once opened her eyes for the entire 80 minutes. Nor did she ever touch the pedal, drawing out resonances instead with finger legato.

The hands take on a life of their own, capering off to opposite ends of the keyboard or converging in the mid-ranges, often crossing over each other with the right hand plumbing the bass ranges while the left scales the treble. Now and then Hewitt leans over her work, head cocked to attend to each hand in turn. Or the hands might levitate above the keyboard to pounce for extra emphasis. Or sidle smoothly across the octaves, eliding phrases.

At the halfway mark, after the 15th variation, Bach starts venturing into minor keys. Some scores taper off inconclusively, in an open fifth, which Hewitt renders with an open palm and an eloquent half-turn of her left wrist. And then it’s back to the major key frisk and gambol, but always now with the lurking prospect of darker hues to come.

Until we plunge into the soul-searching rumination of Number 25, the longest of the variations, the famous “Black Pearl” (as it was dubbed by harpsichordist Wanda Landowska, the 20th century “rediscoverer” of the Goldbergs). Hewitt’s rendition is chillingly fraught, but still within the tempo matrix of the overall work, with none of the stunned lacunae that haunt the Gould version.

Still, she pauses at the end of the Adagio for a fleeting, final frisson before plunging the ebullience of the next four variations, each more virtuosic than the last, culminating in the final, boisterous open-throated Quod Libet. From which she cycles right back to the reflective calm of the original sarabande aria.

Except this time she performs it just once, the only piece in the cycle she plays without a repeat. It leaves both Hewitt and the audience in awed silence for what feels like a full minute before the thunderous ovation.