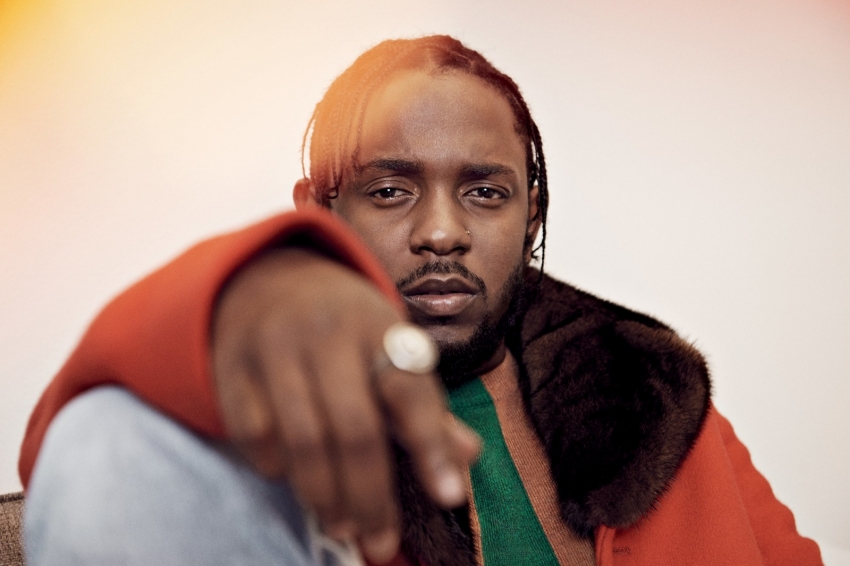 It was a big night for Vancouver, not only were fireworks going off in the harbour, but also inside Rogers Arena. Dram, followed by Travis Scott, and headliner Kendrick Lamar played to a sold out crowd at Rogers Arena.

Travis Scott performed on an almost stark stage apart from a DJ on the turntables. However, the constant fog and laser light show kept the crowd visually engaged. About midway through his set the stage was covered almost completely by the fog, and as it began to dissipate Travis was seen soaring high above the stage standing on top of an animatronic eagle. It was from this perch that he sang the latter half of his set. Overall, he sounded great and the crowd tended to agree yet there there is fine line between too much auto tune and he crossed it.

After Scott's set, it was time for the real fireworks show to begin.

Kendrick Lamar came out with a bang, literally. Massive flames shot up in the air as loud 'gun' shots sounds echoed throughout the arena. The sound was followed closely by smoke which billowed off the main stage (Stage A). As the smoke cleared the crowd went wild as Kendrick Lamar a.k.a. Kung Fu Kenny stood centre-stage dressed in a yellow tracksuit. On either side of the stage, four narrow walls of spotlights shone brightly facing inwards towards him.

For Kendrick's first song a ninja joined him on-stage with a samurai sword in hand. While Kendrick sang, the ninja moved swiftly across the stage swinging his sword back and forth.

Four songs into his set, Kendrick performed one of my favourite songs called King Kunta. To introduce the song flames shot up into the air and the crowd went wild. As the fifth song began, the wall of lights rotated and moved towards the back of the stage. Finally, the lights stopped in place, they provided a bright backlit wall behind Kendrick as he faced the crowd. It was then that I noticed above the stage a massive screen was propped up on angle facing down. The whole scene was spectacular.

The hits continued as 'Future' followed closed by 'Schoolboy Q'  got the whole arena in a frenzy. Kendrick was fueled by the energy and said "This will be loudest motherf*cking experience in your whole life". He admitted it had been awhile since his last visit and was H.U.M.B.L.E.D. by the love expressed by all his fans.

He continued with one of his biggest hits so far, 'Swimming Pools (Drank)'. In 2012, the song propelled Kendrick into mainstream popularity. It was produced by Dr. Dre and eventually won Kendrick 'Best Male Video' and 'Best Hip-Hop Video' at the 2013 MTV Music Awards. The whole crowd followed along, repeating every line as the song progressed.

After 10 songs, Kendrick took his first musical interlude while two dancers / ninjas took the stage, 'fighting' one another. In the meantime, Kendrick prepared to take stage B. Stage B, was a much smaller stage near the centre of the arena.

Once the fight scene stopped, Kendrick rose up from a platform that extended approximately 15 feet above the crowd. He stood on the roof as walls formed below him, lined lights that streamed down towards the floor. From here he sang several more songs before the platform lowered and he disappeared beneath the floor. Enter his second musical interlude.

It was at this time the main screen behind Stage A projected a Mortal Combat-esque fight scene between Kendrick a.k.a. Kung Fu Kenny and his video game nemesis. In the end he prevailed and the real Kendrick appeared back on-stage suspended sideways in the air supported by one of his back-up dancers. In this awkward position, Kendrick sang for almost a full song before dismounting and taking the stage.

The song was one of his slower paced hits which called for the entire crowd to bring out their mobile phone lights. The arena although dark, was lit entirely by thousands of mobile phones. It looked absolutely magical! Kendrick seemed to agree, and replied "Vancouver I think we got the perfect energy right now, keep your lights out."

And, as if it were planned he began to sing 'Bitch, Don't Kill My Vibe'. The entire crowd sang his lyrics back to him as Kendrick stood and admired his Vancouver fans.  He only filled in when needed but the crowd took charge of the song. After finishing up, Kendrick stood on stage in silence as the crowd repeated his name in unison. The energy could be felt everywhere.

This was my third time seeing Kendrick perform live and it definitely will not be my last. He is pure entertainer, amazing musician, who kept his fans fully engaged and I'm almost certain not one person left the show unsatisfied.