How to train your (Imagine) Dragon 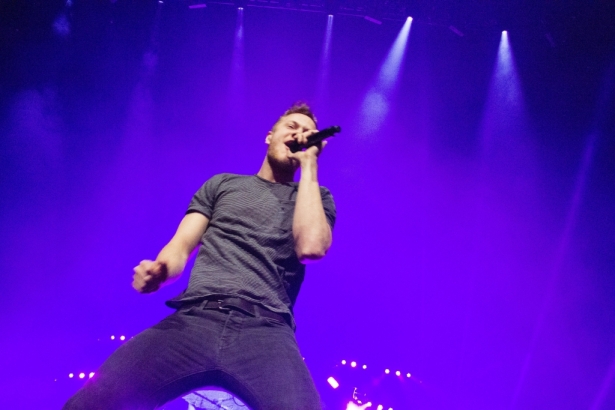 Dan Reynolds seemed slightly bewildered that he was in front of 15,000 people at Rogers Arena. But the lead singer for Las Vegas alt-pop band Imagine Dragons was clearly relishing every moment of it.

The opening was grand to say the least. The band entered and jammed while a giant moon slowly rose until it filled what resembled a periscope or view from a submarine. That window kept changing all night; while it was great effects, it was distracting at times. But it add to the flare of the dramatic that Reynolds and company promote.

Imagine Dragons are very good at what they do, and they clearly love doing it (as evidenced by Reynolds’ impassioned speech about enjoying and supporting live music as well as music’s healing power). But the songs are not necessarily that original and many of the lyrics are rather repetitive. Reynolds is only 26, so he still has plenty of room and time to mature as a songwriter. That being said, the music is still enjoyable and relatively catchy and there is some variety (the ballad “Kingdom Come” was a highlight for me).

One down side about playing a venue as large as Rogers Arena – a part from not being used to it – is too many smart phones. Although I can understand taking pictures or videos if you are up in the nosebleeds, I had a fairly good view of the stage and the row in front of me were using their phone way too much, the same with concertgoers on the floor (granted, those in front of me were tween girls so there’s heightened sense of hype).

There were some humorous moments as well; Reynolds announced a surprise for the Canadian fans and endeared us all when he declared that the band whose song they were about to play were from around Vancouver – “a little east” of here. The band, in case you were wondering, was Rush.

All in all, it was a decent, fun sort of night. Imagine Dragons won’t blow you away with their technique or lyrical content, but there is an audience for it (their album has actually sold more in Canada – triple platinum – than in the states), and if you are looking to take your mind of things with a show that is fun for the whole family, you could do a lot worse.