How the Fallen are Mighty 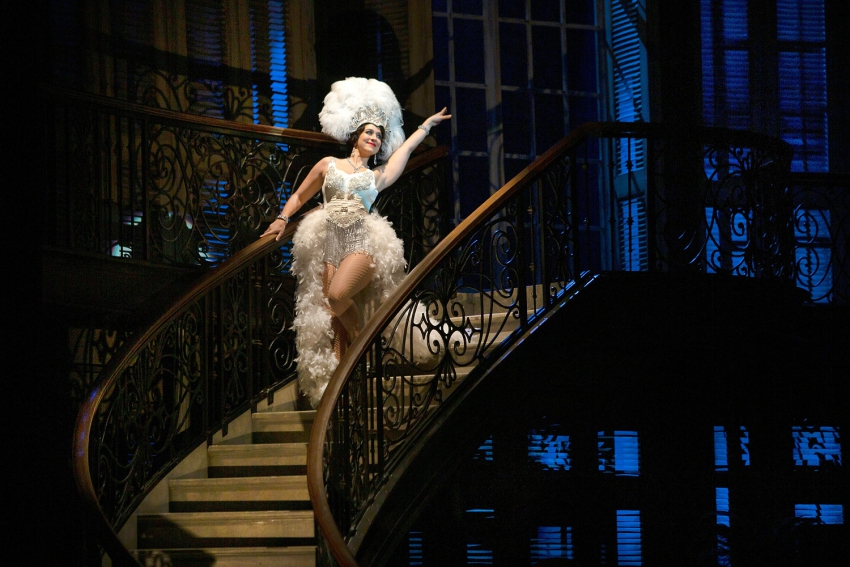 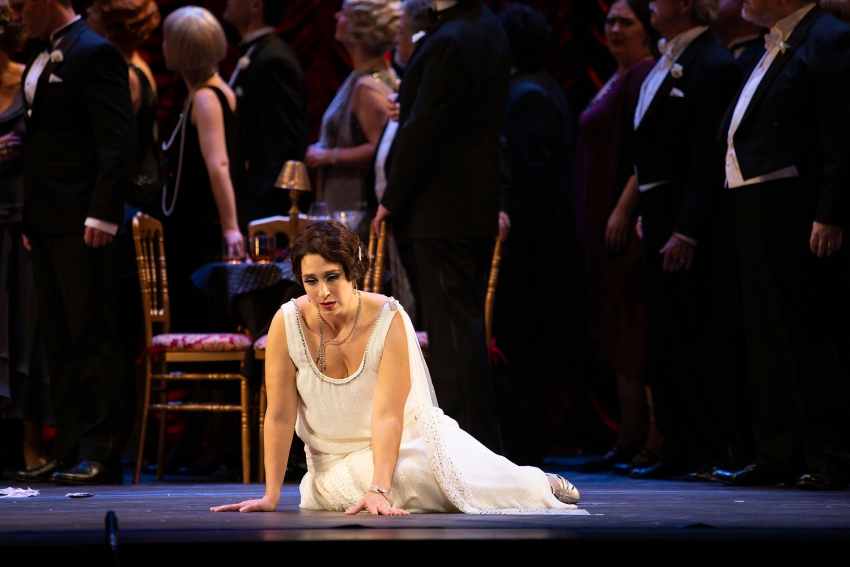 Director Alain Gauthier plants her squarely at the centre of our attention as soon as the curtain parts. She’s meditatively poised in penumbral blue light on a hanging balcony from the moment conductor Yves Abel strikes up the first notes of Verdi’s uncharacteristically muted overture.

But then, as designer Kevin Lamotte brings up the fontal spotlights, her celebrity glamour kicks in. She descends the arcing staircase of Christina Poddubiuk’s stage set, sequinned and plumed like a white cockatoo, beaming and waving to her presumptive fans.

Except halfway down – as Verdi’s languid waltz theme seizes up again into minor chords – she falters, clutching her chest. She recovers, the waltz resumes and she sashays on her way.

So, within the first few minutes of the opera, before she’s even sung a line, Dorn has already enacted the full complexity of her character – the public glitz versus the private premonitions, brooding and longing. We’ve glimpsed her secret vulnerability.

For she’s dying of “consumption” (TB) and she knows it, and all the sparkling Parisian soirées, the well-born Sugar Daddies and the lavish gift-trophies of her fame can no longer really console her. Compared to the grim stalker, Death, she finds herself drawn for the first time in her young life to an actual flesh-and-blood celebrity stalker – callow, provincial Alfredo Germont (Canadian tenor Andrew Haji), who has “admired her from afar” for over a year.

In the iconic Act I “Brindisi” and the ensuing “Always Free” duet – front-loaded highlights of the evening – Alfredo professes his passion while Violetta struggles to resist his allure with frilly, trilly protestations of her devotion to the superficial society whirl.

By Act II, she’s got over these shallow blandishments and seized on her last, best shot at monogamous domesticity before she dies. We find her in a country villa with Alfredo, beatifically rusticated until he accidentally learns that she’s hocking all her baubles to maintain their bliss.

As a matter macho pride he dashes off to Paris to restore her losses. But while he’s out, his father (Chinese baritone Chenye Yuan) turns up at the villa. He’s there to break up their ménage, lest her “fallen woman” stigma so stain the family honour that Alfredo’s younger sister becomes unmarriageable.

The old man expects it should be a simple matter of buying off a debauched gold-digger. He’s shocked – and moved – to learn that it’s Violetta herself, out of pure love for his son, who has been underwriting their idyll. Still, he prevails upon her call off the liaison before the boy inevitably tires of it. She agrees on condition that he someday reveal her “sacrifice.”

Returning after his father departs, Alfredo is mystified why his lover (in another climactic scene) is so fervently swearing her passion for him and pleading for his reciprocal pledge. Only after she charges off into the night does he discover a party invitation from her old Parisian cronies. Assuming the worst, he chases her back to town.

He arrives at the Parisian boîte ahead of her and, in bitterness at her supposed betrayal, plunges himself into a round of frenzied – but uncannily lucky – high-stakes gambling. When Violetta shows up, he flings his winnings at her as a humiliating fee-for-services-rendered. Shattered, she retreats back to her city maisonette.

There, Act III finds her on her deathbed, singing her mournful “Farewell to the Past” as the jollity of carnival street-crowds filters faintly in through the shuttered jalousies. The chastened Germonts, père et fils, arrive and Alfredo gathers her into an all-too-fleeting embrace as they fantasize about recovery and reconciliation.

The guilt-wracked father, downstage right, knows better, intoning his “What have I done?” straight into the audience. Buoyed by false hope, Violetta has a moment of radiant transfiguration before collapsing at Alfredo’s feet.

To Verdi, composing in 1853 at the crest of his career, La Traviata’s story would appeal as a parable on the tensions between fickle fame, prevailing prudery and private angst – subjects all too familiar to himself and his “fallen” mistress at the time. Such themes are timeless, but director Gauthier has chosen to set the new Van Opera version (co-produced with the opera companies of Victoria, Edmonton, Montreal and Manitoba) in the cabaret milieu of 1920’s Paris, “inspired by the audacious…free-spirited Joséphine Baker.”

Inspiring, to be sure, but the comparison didn’t resonate, at least for me, with Dorn’s performance. She sings with an impressive range, both tonally and expressively, to carry the vast repertoire of the role, from sparkling duets to pensive solos. And she has the acting chops to bring off her character’s mercurial mood shifts.

Altogether a nuanced – even mesmerizing – portrayal, but hardly Bakeresque. Nothing exactly jazzy about this Violetta, and her spirit, while audacious in its way, seemed more fettered than free, shadowed by her looming mortality and a weight of convention.

Convention, in La Traviata, is practically personified in the character of Alfredo’s father, which Chenye Yuan embodies with appropriate gravitas. After this production, he’s slated to play Chou En-lai in the English National Opera’s upcoming Nixon in China, and I couldn’t quite shake the spectre of Chou from his persona on the QE stage – smooth, a bit stiff and somehow always calculating, even in his moments of professed passion; all apt enough traits for the elder Germont. What a voice, though!

And what a voice tenor Haji packs into his peripatetic frame! As Alfredo, he projects his serried affects – tenderness, conviviality, jealousy, petulance, remorse – all with such force that we often find him rocking (somewhat distractingly) from foot to foot for extra catapult leverage. He’s at his best when stationary, e.g. seated at a gambling table or offering a toast from a balcony.

The 1920’s motif makes brilliant use of Poddubiuk’s spare set and lavish costumes. In crowd scenes, she festoons her balcony, staircase and dance floor with garishly clad choristers in flapper chic like a satirical George Grosz tableau of decadence. They’re not just there as eye candy, either; they – along with the Van Opera orchestra under Abel’s commanding baton – pack enough thrust to propel Verdi’s iconic melodies into our memory long after the QE curtain rings down.