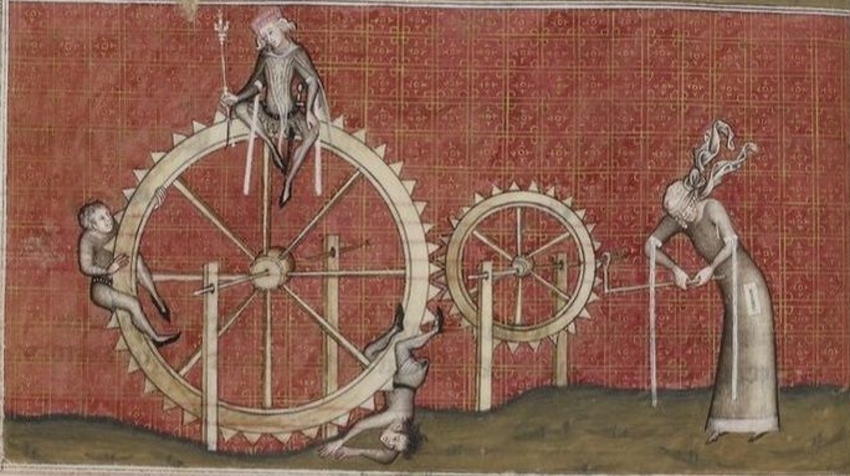 “The course of true love never did run smooth,” as Shakespeare reminds us. But it doesn’t take too many twists and turns to keep it interesting.

Not if you’re 14th century celebrity balladeer (and palace notary) Guillaume de Machaut, surfing the crest of the High Gothic courtly love craze. In his poetic manuscript, A Remedy for Fortune, the formula kinks up into something far twistier, viz.:

Boy finds girl, explains his chagrin, confesses obsession. Girl, flattered, assures boy he’s special to her, too. Boy and girl exchange rings. Boy, gladdened, goes off feasting and jousting; returns to find himself snubbed by girl, who’s dallying with other boy. In jealous despair, boy asks girl: “are we or are we not a number?”

“We are,” girl assures boy, “but not for public display, lest the coarse world sully our noble sentiments with gross insinuations.” Boy settles for this and continues to obsess in secret silence.

All this is detailed in a lengthy manuscript liberally laced with lyrical, octasyllabic “lays,” often limned with melodic notation and illuminated with inset pictorial vignettes. It took Machaut most of the 1340’s to hand-transcribe this lavish book as a tribute to his noble patroness (and presumed courtly inamorata), Bonne of Luxembourg. By the time he finished, she’d already died, likely of the Black Death.

Books of any kind were great rarities in Machaut’s time, aristocratic treasures to be relished in micro-doses and in elite intimacy. To actually perform Remedy's 4,000 lines and seven lyric songs all at a go would take hours or even days. But Boston’s award-winning Blue Heron ensemble has compressed it down to a 90 minute concert piece in eight scenes, which Early Music Vancouver (EMV) brought to the stage of Christ Church Cathedral.

The ensemble’s two directors performed instrumentals – Scott Metcalfe on fiddle and Debra Nagy on woodwinds, plus troubadour harps for each of them. A third instrumentalist, Charles Weaver, played the lute and a hand-cranked “hurdy-gurdy” (a gut-strung drone with a circular bow), as well as filling in on vocals.

Two of the ensemble’s other vocalists, countertenor Martin Near and tenor Owen McIntosh, pitched in on percussion for the dance scenes. And tenor Jason McStoots, took on the voice of the obsessive Lover Boy to link the musical showpieces with very expressive first-person narrative continuity.

Aside from these English language summaries, the rest of the program was in medieval French, a far more toothsome dialect than its modern avatar – less nasality, but with a lot of drawling dipthongs and crunchy final consonants; “savory,” as Metcalfe describes it.

The poetic texts were translated – languidly for the lays, fleetingly for the polyphonal motets – in side-screen captions that scrolled across projection designer Shawn Keener’s montage of pages from the original Machaut manuscript. Particularly gorgeous were the manuscript illuminations, a blaze of mineral colours and metallic leaf, all stylized into symbolic dreamscapes.

McStoots, as narrator, had a lot of fun with the contrast between his own stolid, bearded figure and the wispy, pining wraith of the Lover as depicted in the illuminations. The EMV audience found plenty to chuckle about in Remedy – the wide-eyed excesses of romantic devotion, the little harp-squibs each time the Hope goddess appears or disappears, the rollicking feast dance versus the Lover’s abject “complaint” against blind Fortune.

None of which might have struck a medieval mind as particularly funny, one supposes. By the time of Cervantes, surely, the over-the-top absurdity of was widely recognised – perhaps too much so, considering how deep an influence the ideas of courtly love continue to exercise to this day. And medievalists from C.S. Lewis to Denis de Rougement go so far as to depict the earlier troubador lays as allegorical expressions of religious spirituality rather than neurotically repressed sexuality.

Near and McIntosh sing their portions with exquisite – almost worshipful – purity. Even McStoots, when he’s not enacting the narrative, sidelines his irony to bring a nuanced sensitivity to his solos and a subtle musicianship to his polyphonal improvisations.

Improvistory freedom is one of the great joys of performing medieval music, Metcalfe points out. Most of the repertoire source texts are a good deal sketchier than Machaut’s. And even the Remedy manuscript notates no more than the basic melodic line of the embedded poetry, leaving the ensemble to supply contrapuntal ornamentation based on its own instinct and scholarship.

Blue Heron’s sure instinct are true, deep scholarship and theatrical flair made for a gratifying dive into the funny, touching, unnervingly recognizable psychology of a love-addled brain from seven centuries ago.