EMV lays on a brace of string quartets at Christ Church 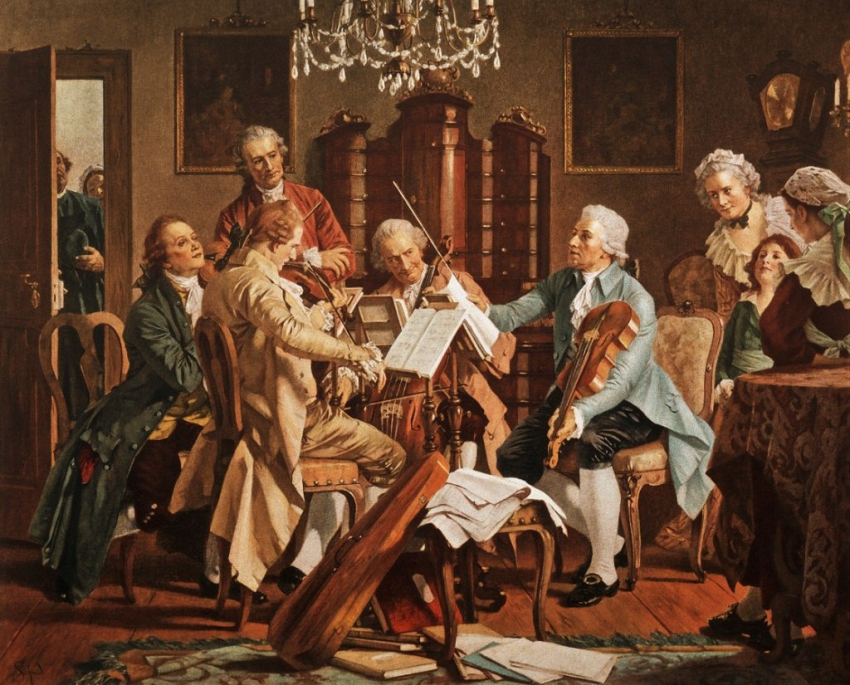 Gut of cat and tail of horse.

Sounds sort of witchy, like “eye of newt and toe of frog,” the sorts of thing you might “boil and bubble” in a necromantic cauldron.

Yet gut and hair turn out to be key ingredients in the HIP (historically informed performance) of baroque, classical and romantic string quartets. And the resulting potion is magic indeed, as attested by a pair of back-to-back concerts laid on this week by Early Music Vancouver (EMV) at Christ Church Cathedral.

Catgut and horsetail comprise the strings and bows, respectively, of 18-19th century chordophones of the sort that might have been familiar to composers from Bach to Mendelssohn.

Of course their music is still playable on modern instruments; synthetic strings and bows in fact deliver a “cleaner” sound, performers admit. But there’s something lost in the translation, according to violinist Johanna Novom of New York’s Diderot Quartet – a certain “grittiness, or graininess.”

It shows in the swooping bow-strokes, the plucky flourish of the pizzicato’s, the precarious frenzy of the tremolo’s. “You work harder,” Eybler Quartet violoinist Aisslinn Nosky admits, “and you take more risks. More ways to blow it.”

This lends an extra drama and visual interest to the performance, which Toronto's Eybler ensemble plays to the hilt. Founder and Patrick Jordan wields his viola with the Indiana Jones panache of an archaeologist-adventurer of period music. The group has evolved a specialization in the music of lesser-known luminaries like Franz Asplmayr and Johann Baptist Vanhal, whose works opened the programme.

These quartets date back to the days, nearly 250 years ago, when chamber music was still very much in camera – a private, exclusive and proprietary pursuit of a moneyed elite. Vanhal, in his day, even got to play cello in a quartet with Haydn as first violin and Mozart on viola. (Second violin for the occasion was, of course, the concert’s wealthy baronial patron.)

But already in the 1700’s a superstar like Haydn, whose B minor quartet rounded out the first half of the Eybler programme, had earned the right to publish as he pleased, without seeking prior approval of his noble patrons.

And by the time of Beethoven, the quartet form had already “gone public,” for better or worse. His late quartets were so far ahead of their time that they were received tepidly, at best, by contemporary concertgoers and musicians alike. To make them even more challenging, Beethoven’s scores included tempo markings geared to the then-newly-invented metronome – far too fast for most performers, whether then or now.

But not for the Eybler group. The latter half of their Christ Church concert featured Beethoven’s D-major quartet (No. 3 Opus 18) rendered at its originally scored tempo, which earned them a standing ovation at the breathless conclusion of the final scherzo – a far cry from the reception the work was accorded by one contemporary 19th century crirtic, who denounce the work as an “indecipherable, uncorrected horror.”

Young Felix Mendelssohn, however, begged to differ. As a teenage prodigy, writing just a few years after Beethoven’s death, Mendelssohn adapted the cyclic form of the late maestro’s D-major quartet into the more accessible romantic idiom of his own first published quartet (in A-minor, No. 2, Op. 13), which featured in the latter half of the Diderot Quartet’s Christ Church concert.

Romanticism apparently entailed more horsehair than classicism. The Diderot foursome opened their programme with a quartet rendering of seven contrapunctii from Bach’s Art of the Fugue. But when they rounded on the Mendelssohn, they swapped bows in favour of longer, heavier wands. This allowed for drawn-out, mellifluous phrasing, extravagant cadenzas and theatrical flourish.

The visual impact was all the more striking as they performed standing (all except cellist Paul Dwyer). Violist Kyle Miller lunged into the music with manic intensity, while first violinist Adriane Post skated atop the shimmering tremolo’s with balletic grace.

Even when the musicians had left the stage after the final ovation, audience members still clustered around Post’s music stand to admire the score that she had played from. It was a photocopy of a 19th century annotated transcription by violinist Ferdinand David, Mendelssohn’s friend and contemporary.

Marginalia in German and elision marks boldly scribed in blue crayon – yet another plumb line into the “gritty, grainy” realms of HIP musicology.