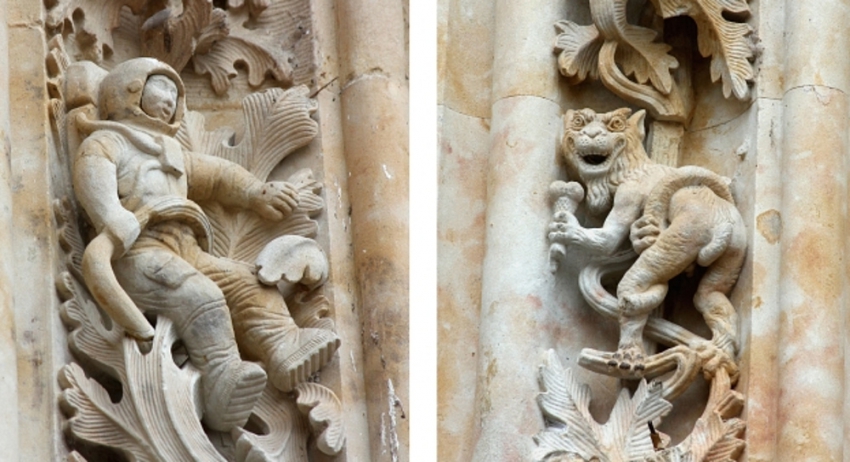 Here you can reverence the writing desk where he penned such classics as On the Origin of Species or The Descent of Man. You can potter in the greenhouse where he set out his homely (but paradigm-shifting) breeding experiments, or retrace the “sand walk” where he daily paced a solitary mile mulling Great Thoughts.

But for me the most moving part of my recent Down House trek was in the graveyard of the 13th century Saint Mary’s Church in the adjacent village. Darwin’s devout wife (and first cousin), Emma, was a parishioner. But, much to her distress, the great theoretician himself was not – his intellectual atheism was too hard-won for that.

Still, he may have often frequented the parish, for three of the couple’s ten offspring died in childhood and are buried in Saint Mary’s churchyard. Through his genetic researches, Darwin well knew how his inbred marriage would have stacked the odds against their survival.

What a wrench it would have been, then, for him to proclaim, in Origin of Species, his stark “one general law, leading to the advancement of all…let the strongest live and the weakest die.”

Yet this merciless tenet serves as the text for the opening movement of composer Gregory Brown’s Missa Charles Darwin, in ironic juxtaposition to the traditional Kyrie eleison (“Lord have mercy”) litany of the canonical Latin mass.

The Missa was created for New York Polyphony, an all-male a capella quartet that commissions “cutting-edge” new works alongside its specialty repertoire of Renaissance and medieval music. It has played in such “secular cathedrals of learning” as the dinosaur hall of Berlin’s Natural History Museum or the Woods Hole oceanographic research centre. But, for its Canadian premiere, Early Music Vancouver (EMV) and the Vancouver Symphony Orchestra’s New Music Festival booked New York Polyphony into actual Anglican cathedrals – Christ Church in Vancouver and Victoria.

Fitting enough, according to Polyphony bass Craig Phillips, who compiled the Missa’s libretto from excerpts of Darwin’s published writings. “It’s not that we set out to confront religious belief,” he says. But he finds in Darwin’s words a lyricism and a humility that amount to a different sort of awe – even reverence – towards Nature.

Brown, who trained as a geologist before devoting himself to vocal music composition, had long struggled with the format of the traditional mass. “It’s a centrepiece of choral music, a mountain that has to be climbed. But, as a non-believer, I had a hard time coming to grips with it. Darwin offered me a way in.”

The canonical order of the liturgy gives the Mass a well-set sequence of moods. It typically starts out with the Kyrie, invoking God’s mercy. Then there’s the Gloria, celebrating God’s splendour and power, followed by the Credo, laying down the bedrock tenets of the faith. Next comes the Sanctus, a paean of awestruck praise, before concluding with the Agnus Dei, that affirms God’s engagement in the world.

To re-acquaint us with the form – and to pre-marinate listeners in the heady blend of the New York Polyphony’s composite voice – the quartet led off the evening’s programme with a four-voice Mass by 16th century English court composer Thomas Tallis, framed by an opening Kyrie and a closing Ite Missa specially commissioned for the group from contemporary composers Andrew Smith and Gabriel Jackson, respectively. With richly layered vocal colours, the performance glowed like an illuminated breviary.

The layering of Missa Charles Darwin, by contrast, was more cerebral – an intricate weave of textures and meters plus a thought-provoking overlay of secular insights on the affective scaffolding of the liturgy. In the Gloria, for instance, we have Darwin extolling the “grandeur in this view of life/In its progress towards perfection…From the war of nature/from famine and death/from so simple a beginning.”

Subtler, non-textual allusions can be even harder to parse. Brown introduces a recurring musical motif derived by translating the amino acid “letters” of DNA from Darwin’s famous finches into musical notes which he then recombines after the manner of genetic mutation, insertion and deletion.

The Mass builds up to a final Angus Dei that concludes with the humbling realization that “If we must marvel/let it be at our presumption in imagining/that we understand the many complex contingencies/on which existence depends.” And, on that note, we conclude with a rousing – and wholly canonical – “Alleluia.”