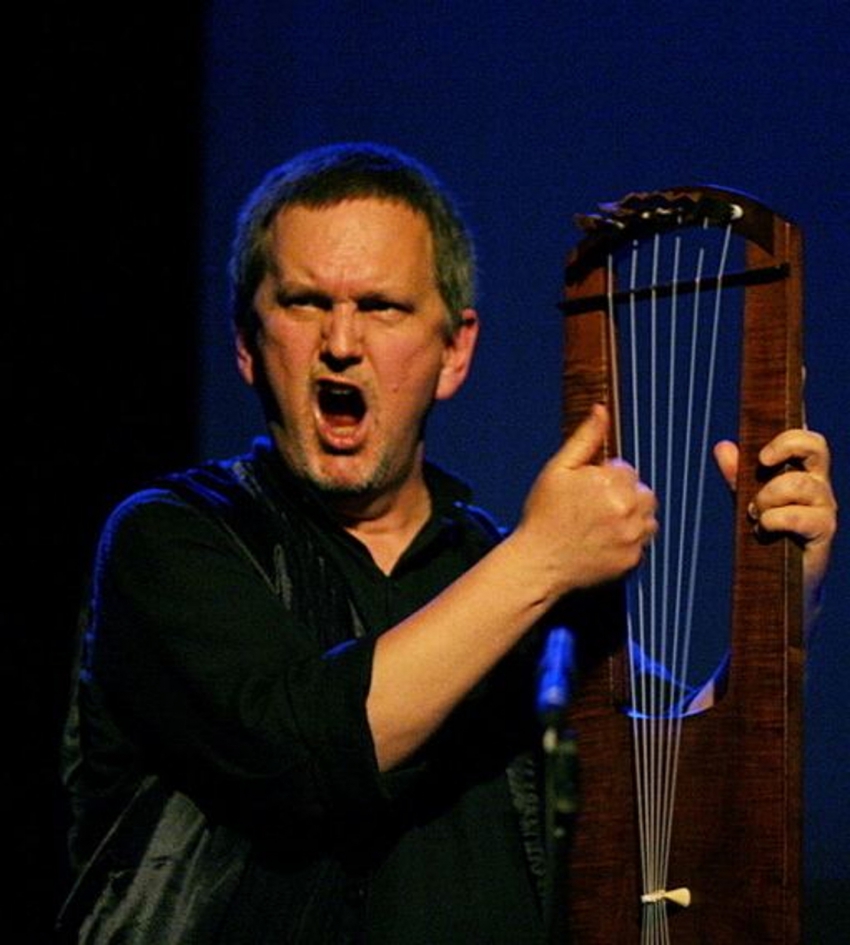 Here’s a rarity for local mélomanes: Early Music Vancouver (EMV) patrons this week can look forward to two successive soirées with a celebrity – a veritable movie star – among harpists.

But don’t come expecting to see some genial, frizzy Marx brother mutely twanging away. Rather, Benjamin Bagby, 68, founding director of the medieval music ensemble Sequentia, is a movie star in the Indiana Jones mold: a geeky antiquarian who doubles as a swashbuckling and distinctly mouthy action hero.

And then, tomorrow (Saturday), Bagby will regale the Vancouver Playhouse with his signature solo, unabridged rendition of Beowulf (or at least the lurid first third of the epic), which he’s been playing to packed houses worldwide for nearly 40 years.

We caught up with the ensemble yesterday during a final rehearsal run-through with projectionist Anika Vervecken. She was there to coordinate the translation surtitles we’ll need to decode the toothsome phonemes of the program’s archaic Norse and English texts.

At every gag and punch-line (and there were many), Vervecken would cut loose with a ritual titter to signal the performers to pause for audience reaction. Tonight, expect those pauses to resound with outright guffaws from the Christ Church crowd – all four performers are masters of understated mime and deadpan humor.

But there’s more than just laughs in store on the Sequentia bill. When Marti’s rich contralto wails a lament of tribal miscegenation and abandonment, her medieval harp takes on all the driving force of deepest Delta Blues. When the two women morph into a pair of giantess slaves chained to a magic millstone, their vengeful churning rocks the room. Even the recitation of a potion prescription becomes a pitched battle between personified poisons and healing herbs.

And the music! Minimalistic, repetitive “modes” on each instrument interweave with each other into patterns as rich as the plaids and tweeds of Northern European finery, offsetting the intricate filigree of the flute and vocal lines. The effect can be mesmeric, imaginatively propelling us, for a while at least, out of our modern concert-hall armchairs and back to the smoky mead-halls, monastic scriptoria and forest campfires where these songs were originally performed.

“Attention spans were longer and more intense in a pre-literate culture,” Bagby admits in a website essay, whereas a modern audiences expect “program notes, pre-concert lectures, an atmosphere of reverent silence and standardized concert lengths.” Still, if the elusive ideal of “authenticity” remains beyond our reach, at least we can strive for “historically informed performance,” or HIP, as the current euphemism has it.

It’s to plumb the mind and aesthetic of a medieval storyteller that Bagby’s evolved his Indiana Jones duality. Patient scholarship would only get him halfway to HIP. To fully assume the bardic mantle required a plunge into what he terms “modal” music.