The Disco Called... they want Their Panic Back! 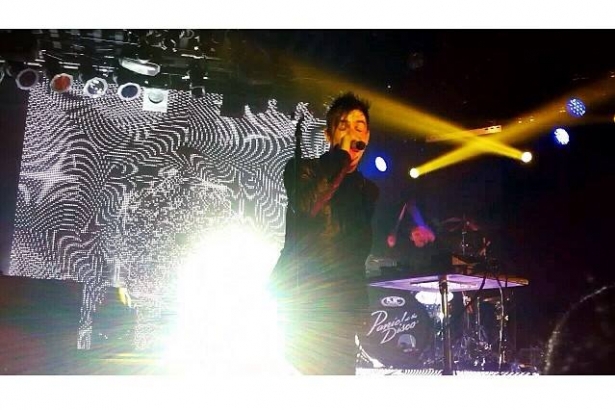 This was a bit of a strange night for me. I only applied for a media pass so that I could accompany my girlfriend, who had bought tickets months earlier to the show and then she was not able to go. So, there I was, a 25-year old male, alone at a Panic! At The Disco concert. I had never heard even one of their songs and was probably among a crowd that was too mainstream by my hipster, community radio friends' standard.

I don’t know why I had an idea that PATD was emo-rock, pop-punk band (perhaps because they had opened for Fall Out Boy their last time in Vancouver). Whatever my pre-conceived notions were, they were shattered about three songs in. The band was attired in white shirts and black jackets – although lead singer Brandon Urie’s was covered with gold sparkles – and the set was complete with a giant video screen, state of the art lights, which flashed many different colours, and dry smoke that upwards during a few of the early songs.

They are definitely a rock band, although they do have heavy pop-music undertones, which is also infused with electronica and dance music. Lead singer Urie is especially poised and polished for 26 and gave an absolutely incredible, tour-de-force and sweat-laden performance. Perhaps it was those lights, the sheer awesome of touring guitarist Kenneth Harris’ guitar solos, the adrenaline, or a combination of all three, but the only person I’ve ever seen sweat more than Urie was Mr. Jones my eighth grade music teacher and he was portly and in his mid fifties at that time. Halfway through the show Urie – and the rest of the band – left the stage, most likely to take a shower, and upon their return Urie was sans jacket. He then proceeded to play a beautiful ballad on the piano, upon which he had a placed a towel, and it stayed there for the rest of the night.

I still don’t know much about the band as a whole, but the two songs (the ones whose names I can remember anyways) that stuck out to me were the catchy “Nine in the Afternoon” and the more soulful “nicotine”. Urie has a great range and power; he can really hold a note. Panic’s entire set was a spectacular demonstration of pop infused rock tunes interspersed with colourful antics by Urie (which at one point included asking the audience for some “fucking weed”)

Speaking of antics, during the encore, things just got plain bizarre. When the band re-entered the set formation, not only was Urie’s face wiped clean of its perspiration drippings, but he seemed to have lost his white shirt and now stood front and centre showing off his completely waxed chest. And he wasn’t through with his performance. You may recall earlier that he asked the predominantly young crowd of baristas and low-wage workers for some good ol’ fashioned BC bud. Well someone must have obliged because just before he started the encore he lit one up on stage in full view of everybody. He then implored the audience to keep on giving and implied that he would be willing to offer and receive almost anything. But back to the music.

I normally try to stay back, in order to get the most objective view of the performance. After running into a friend, and with his goading, we made our way into the crowd, and felt the full force of sweaty armpits, grinders, PDA and spilled draught. Yet the music remained solid. Solid gold. It was most enjoyable. Too Weird To Live, To Rare To Die is Panic! At The Disco’s fourth album. While they have had some creative changes in which they lost co-founder Ryan Ross as well Brent Wilson, clearly PATD has weathered the storm and gotten over and conquered the “curse of three”. Oh and Brandon, the 80s called, they want their gold jacket back.

Too Weird To Live, Too Rare To Die was released on October 8, 2013 on Fueled By Ramen.