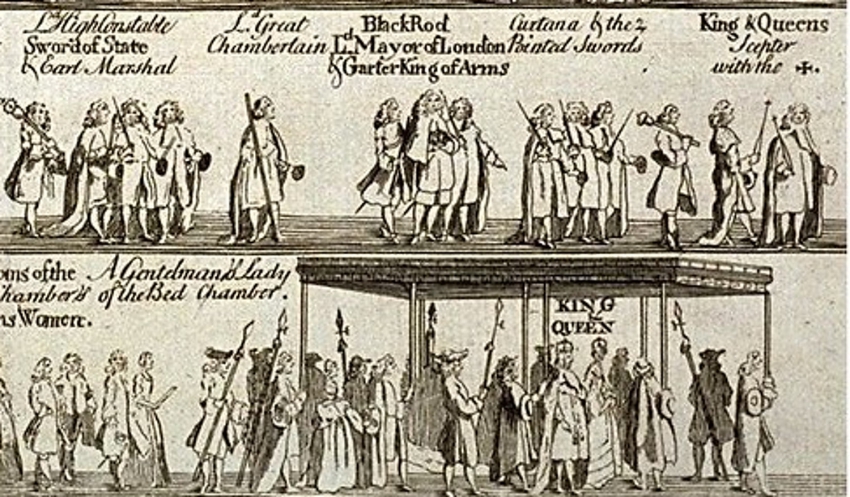 Ruffles & flourishes. Image: "Parliament Past and Present" by A. Wright and P. Smith (London, 1902)

Flattery will get you everywhere, as the go-getting High Baroque composer Georg Frideric Handel quickly learned in his adopted homeland of Britain.

First he had to ingratiate himself with the last Stuart monarch of the realm, and then with her Hanoverian successor, whom he’d risked alienating by welching on a contract back in his native Germany. His solution: cater the ongoing round of royal festivities with some of the lushest celebratory party music ever written.

Pieces like his Birthday Ode for Queen Anne or his Coronation Anthems for George II may lack the depth of Handel’s later oratorios or finest operas. But they’re rousing and deft and continue to flatter the ears of modern listeners, as our hometown Cantata Singers and Pacific Baroque Orchestra demonstrated this week at the Chan Centre in the penultimate concert of Early Music Vancouver’s 2018-19 roster (next and last for the season: Capella Romana ensemble with an evening of Byzantine-influenced music from Crete, May 10 at Christ Church Cathedral).

After an Italian stint in his early 20’s imbibing the bravura style of then-nascent opera forms, Handel returned to Germany and signed on as Kapellmeister at the Hanoverian court of a canny old political operator, Georg Ludwig, ruler of the Duchy of Brunswick-Lüneburg, Arch-Treasurer and Prince-Elector of the Holy Roman Empire.

But the young composer had already set his sights further west: on London, capital of an up-and-coming colonial and mercantile empire, where aristocratic salons and arriviste bourgeois theatre-goers alike thirsted for some continental flair.

Handel’s opera Rinaldo filled the bill perfectly, establishing him as the toast of London by age 26. Ditching his Hanoverian appointment, he settled in England for good. Queen Anne herself, the unifier of Great Britain, gratefully received his secular cantata Eternal Source of Light Divine to mark her49th birthday.

She went on to commission from him a Te Deum et Jubilate to celebrate her 1713 diplomatic coup in engineering the Treaty of Utrecht to end the long-festering War of Spanish Succession and avert the rise of a continental Catholic super-power to balk British/Protestant ambitions.

But one codicil of that accord nearly balked Handel’s own ambitions: upon Anne’s death the very next year, the treaty designated her nearest Protestant relative to succeed her on the British throne. And that turned out to be none other than Georg Ludwig (now George I of England and Scotland), the same Hanoverian grandee that Handel has stiffed a couple of years before.

It took the composer fully three years to come up with the right conciliatory offering to restore himself to favour: the incomparable Water Music orchestral suites, created for a royal boating party on the Thames with two very different audiences in mind – George’s reputedly rather dullard ear aboard the kingly barge and the surly British public lining the riverbank, still skeptical of their foreign monarch. The suites succeeded brilliantly on both accounts, according to contemporary reports.

One listener remained unmoved, however: George’s son and heir, the Prince of Wales, who declined to even attend the Water Music barge party (or, for that matter, his estranged father’s funeral 10 years later back in Hanover). So when the prince eventually ascended to the throne as George II in 1727, Handel faced a whole new propitiatory challenge: a set of four anthems for the new king’s coronation.

By this time, though, he was an old hand at musical flattery. And writing “big” ceremonial music to resound in the great gothic barn of Westminster Abbey was still less daunting than trying to fill the whole Thames basin. Especially with the troop strength Handel had at his disposal: a choir of more than 40 and a 160-piece orchestra.

Conducting the 21-member Pacific Baroque Orchestra and the 38-voice Cantata singers from behind his Vancouver-built harpsichord, PBO director Alexander Weimann still managed to fill the cavernous Chan Centre with a strong, dynamic rendition of the iconic anthems. But, to my mind, the highlight of the evening came in the second half of the programme, Queen Anne’s Birthday Ode, written in Handel’s earlier, more “operatic” style.

Each of the Ode’s seven stanzas bears its own distinctive style, tailored to the verse with far more finesse than the admittedly rather hackneyed libretto deserves. Along the way, vocal and instrumental soloists get ample play to strut their considerable talents.

After a lilting pastoral about “friendly consort,” St. Pierre returns in duet with bass-baritone Sumner Thompson in a jaunty (Spanish?) cadence. The mezzo stays on in the next stanza for a gentle duet with the soprano wishing the Queen “kind health…on downy wings” – all the more poignant at the time as Anne was already unable to walk and visibly near death.

But the Ode forges on with a rousing baritone condemnation of “blasted faction” and “hissing tongues” – in other words Fake News – before concluding with a mezzo affirmation that the royal “actions are divine.”

Just the sort of sycophancy you might expect from some latter-day courtiers even in our own time, but with incomparably more finesse. Flattery just ain’t what it used to be.