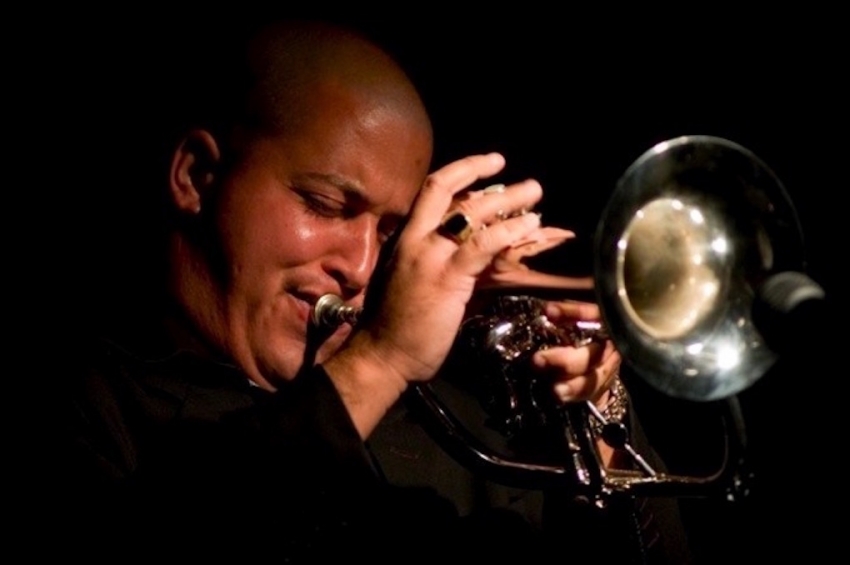 Billed as a funding gala for the Vancouver Latin American Cultural Centre, last week’s “Club Habana” had all the flair and finery of a charity ball. Compared with the glad rags in the packed audience, the six instrumentalists on stage looked decidedly staid:

But from the moment they cut loose with Thompson’s original arrangement of Diálog, they shed all vestiges of bankerly or priestly decorum.  Valdés and Thompson vied to top each other with vaulting treble riffs, as Cárdenas festooned the theme with great looping arpeggios.

By the time they took up La negra Tomasa, Valdés already had the crowd clapping and waving along with the band while he and Thompson rumba’d together in synchrony downstage centre. Toto stepped out from behind his congas to lead off the set with an incantatory a capella invocation of the eponymous Negra enchantress. Out in the audience, little girls in crinolines and matrons in floral shawls took to the aisles, gyrating apace.

And that was even before the evening’s gyrator-in-chief – vocalist Danay Sinclair – took to the stage. In a black satin sheath that offset her gleaming smile and her bib of Cleopatra bling, she epitomized Roethke’s steamy strophe, “she moved in circles, and those circles moved.”

With a face as expressive as her fine contralto voice, she carried the torch ballad Bésame mucho pretty much on her own; only the gentlest accompaniment from Riverón, draped adoringly around his acoustic double bass. Sinclair’s other tour de force of the evening left lots more room for the rest of the Club Habana combo to chime in. By the end of her second number, she had pretty much the entire audience joining in the quizzical refrain Quizás, quizás, quizás.

In between these two vocal showstoppers, the Club Habana bill offered plenty of scope for bravura instrumentals, too. Toto Berriel performed his own arrangement of Macusere, wringing rhythmic complexity out of everything from tumbas to bongos to the wooden crate he sat on. In the Son a Guajimico, Sánchez propelled the concert to a sizzling climax, his prim little string tie wagging in ecstatic frenzy across his drum set.

There was even a guest turn at the piano by Valdés’ young protégé, 15-year-old Ilhan Saferali. In his brush cut and geek glasses, the Vancouver-born prodigy cut a wispy “Where’s Elmer” figure. But he droves the concert grand with power and authority.

Senior pianist Cárdenas, with less to prove, could afford a bit more lyricism. He even vaunted his classical training by quoting a Chopin Nocturne as his intro to Valdés’ elegiac composition Missing Home. This piece, in its heady nostalgia, was as intoxicatingly sweet as a coconut rum flan. All the more poignant since, of the eight musicians on stage, only one – Thompson – still lives on the island; the rest, for all their dyed-in-the-wool cubanismo, are now Canadians.

But the distance is shrinking between our own Rain City and the Caribbean City of
Columns, as reflected in another original Valdés composition, Y ahora qué. The title simply means “What now?” Apt question, as Cuba begins to come back from its decades of diplomatic and economic isolation.

With strong rhythmic backing, Y ahora qué posed an edgy, inconclusive dialogue between the piano, saxophone and trumpet – testimonial to the yanqi strains of jazz, blues, rock and rap that the musicians have absorbed during their long expatriation.

Such cross fertilization is only likely to increase in a more accessible Cuba – to the enrichment of the genre or the dilution of its distinctive sabor?