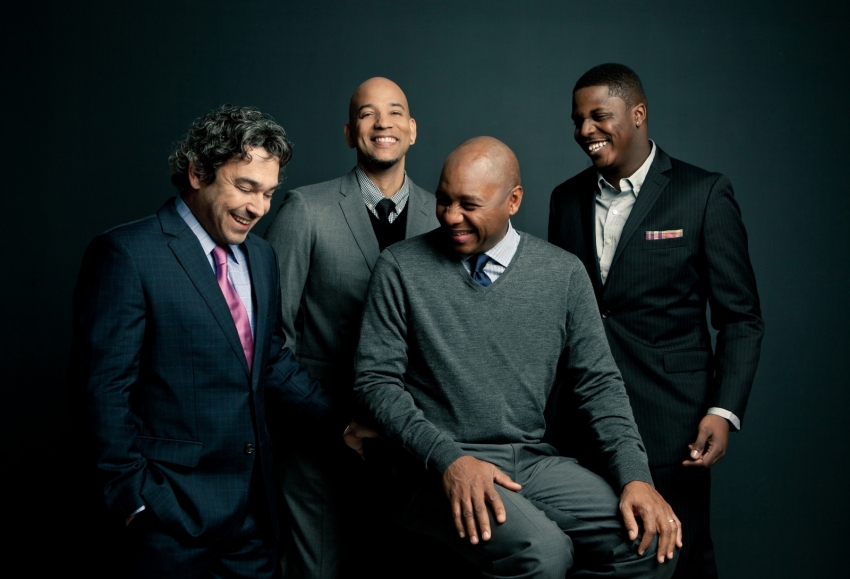 The answer is partly Big Sound (although the evening featured many exquisitely meditative moments, too). But, even more than that, it was the sheer dramaturgy of the Branford Marsalis Quartet. The members vaunted their distinctive musical personalities, all the while fitting around each other in a series of impeccably coordinated entries and exits.

Of course the only one who can actually move around onstage is ensemble leader Marsalis himself, thanks to the unique portability of his saxophones (alto and soprano). He made full use of this flexibility, leading off most sets, only to then eclipse himself behind the stolid rampart of Joey Calderazzo's grand piano, Eric Revis' towering bass and Justin Faulkner's sprawling drum set.

He'd quietly groove in the background as his bandmates each had a crack at elaborating the theme. Then Marsalis would re-emerge to wrap it all up with his own audacious extemporization. Sometimes he even seemed to be in dialogue with himself, pacing downstage to present first his left and then his right profile for successive phrases.

No shortage of dramaturgy among the other combo members, either. Calderazzo hunches into his work, spanning octaves at a time, often working up enough of a head of steam to lift him right off the piano bench. Revis croons and whispers to his bass, intimate sweet nothings that are not for our ears but just between him and his confidante instrument. Faulkner lays down a deep-pile carpet of rhythm. Given a chance, he rouses himself to a bucking frenzy, but can just as readily subside to deft, spare, punctuational brushstrokes on the cymbals.

The concert launched with three pieces -- two of them composed by combo members themselves -- from the Quartet's 2012 album Four MFs Playin' Tunes. Caldarazzo's Mighty Sword briskly laid out the evening's dramatis personae, introducing each MF's signature talents with a bravura turn. Then segue into Revis' Maestra; piano spangles and a woody bass solo, like sunbeams filtering through a forest canopy to highlight the gnarled and rhythmic ranks of tree trunks. The set closes with a cover of Thelonius Monk's Teo. Propulsive alto riffs by Marsalis, in dialogue with Faulkner's drums; Revis' stride solo ornamented with a filigree of chords and trills from Caldarazzo's piano.

In the second set, Marsalis wrung a new eloquence out of the old Hoagy Charmichael standby Stardust. He started with ruminative ostinato, worked his way up to lilting swing and then subsided back to a last nostalgic sigh. For me, though, the highlight of the set was the final piece, Caldarazzo's As Summer into Autumn Slips. The title comes from a rueful little Emily Dickenson poem about "the Shaft/Of Life's Declivity," which the Quartet rendered as a meditative stroll by Marsalis' soprano solo through the rain-slicked streetscape of Caldarazzo's arpeggio riffs. Revis and Faulkner provided crucial -- but delicately restrained -- rhythmic backing.

This tour de force drew such a standing ovation that there was no escaping without an encore. Somebody in the audience called out for Funny Valentine, so Calderazzo duly obliged for a few bars, before tweaking the theme into a droll rendition of Saint James Infirmary. Faulkner laid down a march-time drum track for Marsalis' wailing exposition, turning the whole piece into an ecstatic New Orleans funeral procession. It all wound up with a few bars' ironic quotation from Chopin as the Quartet marched itself offstage.