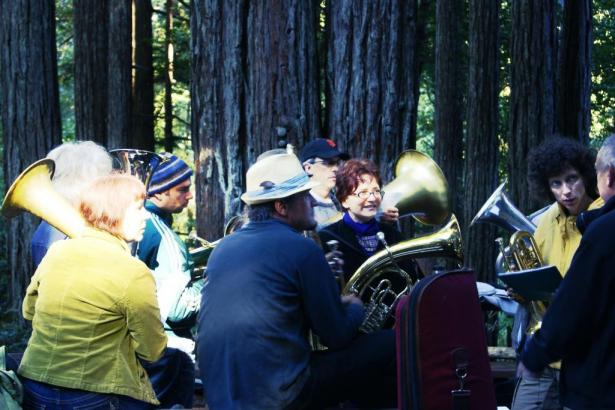 In her book, Dancing in the Streets: A History of Collective Joy, author and cultural historian Barbara Ehrenreich contrasts the “epidemic of melancholia” that pervades much of the modern world with the “phenomenon of communal, shared ecstatic ritual” that existed in our own culture even until the 17th century.

I touched into this phenomenon during last winter’s ever-rains when I began exploring Vancouver’s burgeoning Balkan music scene. There, I found a lively and musically nourishing community of musicians, dancers, and singers. At an Balkan brass band concert at the Russian Hall, I found a brochure for a music camp put on by The East European Folklife Center and I knew I wanted more.

So with the stench of burning police cars still hanging in the air (and local hockey riot pundits insisting that ‘we’re not like that’), I decided to leave Vancouver and follow a niggling intuition that a week of village life was just what I needed. My destination: The Balkan Music and Dance Workshops deep in the Redwood forests near Mendocino, California.

I soon found that the camp is an ideal artistic environment for anyone with a propensity for musical intelligence, and also it’s a rare chance to return to a rustic existence of woodsy cabins, merry village folk, and a healthy sense of belonging—even if just temporarily. Each day was punctuated with music, dancing, singing classes, and mealtime feasts. Evenings were given over to story telling, group dancing and intoxicating late-night music warmed by the huge stone hearth in the kafana (Balkan coffee house).

Rachel MacFarlane, general manager, cautioned me about the picture of the camp as a perfect village; although, in the next breath she praised the “collective spirit of goodwill” that stirred fellow campers to give up their cabins to accommodate a rained out gudulka class.

The Desire for Dissonance and Instability

“Western tonal music is based on the dichotomy of dissonance and consonance where unstable dissonances seek their resolutions to consonant sonorities”, states Kalin Kirilov, the camp’s expert on Bulgarian harmony. “If you compare music to energy”, he continues, “the dissonances carry a more powerful charge in comparison to the consonances”.

In 2003, Kalin Kirilov met a guitarist from Detroit who asked him if he could teach him to play Bulgarian music. At the time Kalin said it couldn’t be taught in a formal way, but the idea persisted with him and over the next few years he did figure out how to crack the Rosetto Stone of Bulgarian music. In 2007, he defended his dissertation, Harmony in Bulgarian Music. He now teaches music theory at Towson University in Maryland.

In my music education, I’d understood that complex metres (time signatures) in Balkan music were somehow the needlessly convoluted work of a people who were, well, Byzantine. Kalin provided the necessary context: “Asymmetrical metres exist in a huge variety starting from 5/8 to 15/8. Pushing the concept of asymmetry further, Bulgarians combine different asymmetrical metres forming complex metric groups (for example: 7/8 + 11/8) or juxtapose different asymmetrical metres one against the other”. Then Kalin startled me, “mixed metres push the extremes of what it is to be human”.

Balkan music is rendered simple as soon as one steps onto the dance floor. Its loping, elegant rhythms soon reveal themselves—it’s how a body of conjoined dancers naturally moves.

When some adults might be dreaming of marble counter tops in the suburbs or slowly burning out to channel-changer stagnation, Rachel (who originally joined the camp as a singer), took up the tenor horn (central European euphonium) and was instrumental in forming Brass Menazeri, San Francisco’s pre-eminent Balkan brass band.