Kid Koala and the sound of scratch 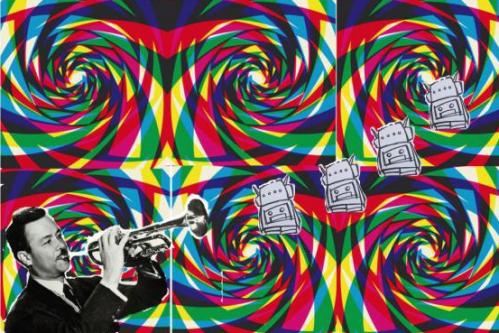 “It’s not always music” explains the man who turned spinning records into an art form. Ten years have gone by since the Canadian turn-tablist Kid Koala, also known as Eric San, released his debut album to a seemingly unsuspecting audience. “No one knew where to put my records,” he says.

Beyond categorization is one way to describe his music. Having toured with the Beastie Boys and Bjork, San is a far cry from the idea of a disc jockey as we have come to traditionally understand.  His music is more about story telling through sound than it is about making sure everyone stays on the dance floor, fists pumping. He has elevated the turntable to an instrument itself rather than just a mechanism to switch records. In doing so, he has turned the role of the DJ into a magician of sorts. Much of his music is accompanied with graphic novels: over 300 pages about a robot who falls in love or a 2D story about a mosquito playing clarinet are part and parcel to the Kid Koala experience. He is an artist you can trust to take you somewhere you’ve never been before: with drunken trumpets, people sneezing, and clowns who speak Russian.

While San was born in Vancouver, he grew up in Maryland on the outskirts of Washington, DC and then moved to Montreal which he now calls home. Having completed his degree in childhood education at McGill, it seems no surprise that much of his craft is rooted in playfulness. The Muppets, Cookie Monster, and Charlie Brown all find their way into his tracks. He creates an auditory narrative of exploration  that aims to stretch the boundaries of imagination. But beyond the desire to take his audience on a magic carpet ride, the work of Kid Koala has evolved over the years into a diligent and carefully crafted sound.

I spoke with San as he prepared to come to town at the end of the month for the International Jazz Festival. He had to let go of the expectations that others had of his music early on, and says “You realize with time that there is a story you are being called to tell” as an artist. The story of this DJ however, did not start under the flashing lights of a disco ball in the dark and sweaty corners of a nightclub.  San was trained as a classical pianist and grew up in a house where he says a lot of classical and folk music was always playing.

“My mother was a fan of Gershwin and Rodgers and Hart. The stuff starts to enter your vocabulary, whether you like it or not.” The move from piano to turntables was about the need for a medium of expression that would allow for improvisation. “I was drawn to the turntable because it was obvious to me the potential it had.” It was about being able to do anything you wanted musically, “since [the turntable] lives in this chameleon type of realm.”

But it’s not just about heads banging and record scratching. San talks about the “anthropological side to the DJ” as an artist who is continually “digging” through old records in order to find something he can make new again. Throughout our conversation, he speaks about creating sounds no one has ever heard before, “the crazier, the better” he says.