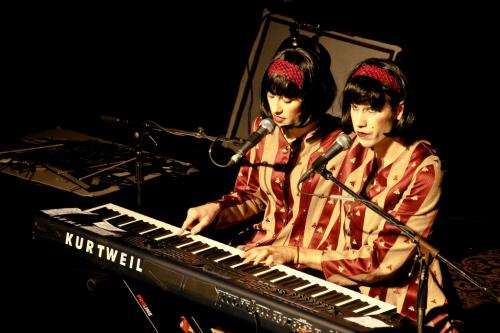 Swathed in an enormous orange dress, parapagus conjoined-twin folk duo Evelyn Evelyn played to a packed house at the Venue on Granville street Monday night. The sisters mostly performed their own iconic hits, including "You Only Want Me 'Cause You Want My Sister" and "Elephant Elephant." They also covered Bill Withers' "Lean On Me" and, in what was probably the show's finest moment, a ukulele arrangement of Joy Division's "Love Will Tear Us Apart."

Showing off their purported circus roots, the twins did a stint as a two-headed oracle, alternating words to answer audience questions (example: "If God loves me, why can't I get into my locker at school?"), abetted by impresario handler Sxip Shirey.

Shirey himself essayed a short opening set of his own compositions, including the unexpectedly poignant "Rain On The Roses," on a collection of found objects, mostly dollar-store toys, and a sampling pedal.

Orphaned in a tragic series of accidents and raised in a chicken coop, Lyn and Eva Neville, 25, resided with Dillard and Fullerton’s Traveling Circus from 1996 until being discovered in 2007. While with the circus, they may or may not have ridden the world's only conjoined-twin elephants, Bimba and Kimba.

As the show began Monday night, I overheard a bartender quietly ask an audience member, "Are they actually twins?"

Evelyn Evelyn in fact came into this world not, as the show's literature claims, in an airstream trailer on the Kentucky/Colorado border, but via the combined imaginations of punk cabaret icon Amanda Palmer and twisted Seattle folk musician Jason Webley.

Webley and Palmer perform as the twins. The act finished a tour of Europe two weeks ago; Vancouver was their first stop in North America.

Owing perhaps to online controversy Evelyn Evelyn generated even in its earliest conception, the actual show demonstrated surprising restraint. Awkward silence and overwrought stage-fright carried the comedy, a sharp contrast to the more characteristic excess that both Webley and Palmer indulged lavishly in their follow-up solo sets.

The show seemed plagued by technical difficulties, hardly unusual for the first of a tour. But between its innate eccentricity and the improvisational strength of its participants, it was by no means clear which hang-ups were planned and which accidental. The kerfuffle which ended with the show's tour manager crouched in front of Palmer, gripping a cymbal for her to batter during "Chicken Man" was surely staged. Webley's out-of-tune guitar, bad enough to bring the show to a halt and prompt Palmer to take another go at a dramatic re-entrance, perhaps not.

Palmer and Webley both possess considerable natural rapport with their audiences, whether in character and out. Be it in acts as simple as Evelyn Evelyn squabbling over a Twix bar or as overtly manipulative as Webley dividing the audience in two and whipping it into a competitive frenzy for his song "There's Not a Step We Can Take That Does Not Bring Us Closer," both performers played the audience every bit as adroitly as they did their manifold instruments.