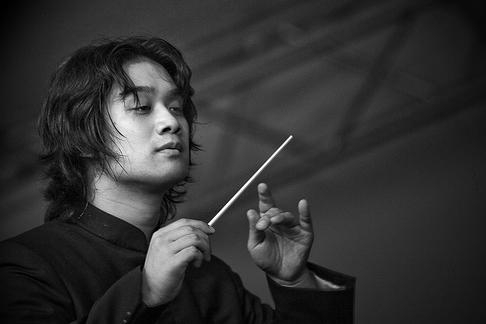 Maestro Ken Hsieh, the empathetic lion, conductor of the VMO Photo Courtesy of Ahmad and Graça and the VMO

“The very first time we did a VMO concert was in 2003, 28 degrees or so in a church, and it was my first time to wear a black Traditional Chinese jacket tailored for me. I was wearing a white shirt underneath and so somebody came up to me and said, ‘Oh Father..’ mistaking me for a priest.” Maestro Ken Hsieh of the Vancouver Metropolitan Orchestra laughed as he told the story.

“I always say conducting is 40 percent music, 20 percent technique, and 40 percent psychology---psychology in the sense of how you convince people to go with your idea [grasping the music as interpreted by the Maestro and musicians],” Hsieh said.  Conducting is more than slicing air and reading the history of composers to place oneself in the piece's mindset. It has to be heartfelt, he emphasized.

“When everything comes together and when the musicians go along with your [the Maestro’s] idea with the audience behind you to captivate those emotions, the feeling is really indescribable,” he said about the energy that rushes through him as each cadence portrays the vision and dream set out by Tchaikovsky’s Nutcracker. Hsieh clearly embraces rehearsals for the Nutcracker, delving into the music with a passion and sincerity that is palpable. Sensitive to the dynamics of precision, Hsieh's energetic charisma and his ease in orchestrating brings out a vivid interpretation the VMO with the Goh Ballet infuse into this old holiday favourite.

Hsieh is both master and a ready student. “Working with many composers, you always are learning when you’re involved in music. My interpretation of Nutcracker is of Tchaikovsky wanting to bring people together and to portray his dream of happiness as seen during Christmas time.”

How he can make the Nutcracker different is not entirely up to him even though he can manipulate the tempo, however, he said. “The dancers play a great role synergizing my conducting cues with their movements and I have to anticipate when they will leap.”

“Some musicians are playing Nutcracker for the first time and there are always new ideas with added spontaneity, unlike the more mature musicians.”

Spontaneity is the word that wraps up Hsieh's interview with VO. When you possess as much vigor in conducting as Hsieh does, to the point where you rip a hole in your jacket right along the armpit in the midst of conducting, you find a cool solution to keep going.