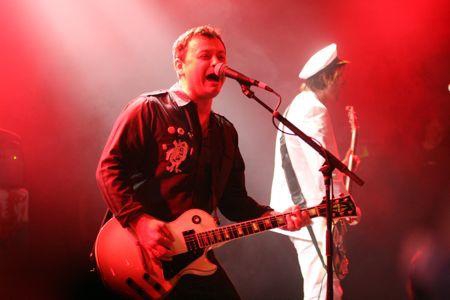 Sure, the Commodore wasn’t full – although it wasn’t empty either – and the crowd's energy was lacking at times. But that was the magic of seeing the Manic Street Preachers in Vancouver Tuesday night.

This is a band that has sold out stadiums in the United Kingdom, released consistently terrific albums over the past 15 years and reinvented themselves enough times for fans to forget that the band pledged to burn out way back in 1991.

And yet, here was lead singer/lead guitarist James Dean Bradfield yo-yoing to and from the Commodore Ballroom’s microphone. And there was Nicky Wire wearing a sailor’s uniform, and standing nine gazillion feet tall beside him, plucking away at his bass. And behind the kit, there was Sean Moore bashing out the drum lines to the band’s biggest hits. And over there was a touring guitarist and a keyboard player trying to stay out of any lights shone their way.

Your trusty reviewer was hardly an impartial observer of the above scenes. While a fan for upwards of a decade now, I hadn’t even pondered the possibility that I might see “The Manics” in concert. But here they were in their first Vancouver appearance in 10 years. (When you’ve established a dedicated following in one region, travelling overseas to play smaller venues must quickly lose its luster.)

Perhaps mindful of the long gap between shows, the band played a scattered list of songs from every album save 2004’s Lifeblood. After leading off with “Motorcycle Emptiness,” from the band’s first album, the band mixed it up. Early on, the band hit all the touchstones in its circular career path, from the punky, Guns N’ Roses-meets-The Sex Pistols of “Faster,” to the mid-tempo arena rock of “Everything Must Go,” and finally to ballads like “If You Tolerate This Your Children Will Be Next.”

And although the crowd was certainly smaller than in the U.K., Bradfield was gracious between songs, noting that the gig was certainly better than the first time the band visited Vancouver. On that occasion, he said the Manics played to an audience of 10 people. And while two of those ten were Jon Bon Jovi and Bob Rock, Bradfield said the two rock impresarios ended up leaving in disgust.

On Tuesday, no one made for the exit early. While the pace lagged at points, when Bradford’s mates exited stage left mid-set for two solo acoustic songs, the night regained its structure and intensity. Strumming an acoustic guitar, Bradford’s voice shone on “This is Yesterday” and “The Everlasting.” And when Wire and the rest of the band returned to belt out a scorching “Send Away The Tigers,” it was as if someone had turned the volume up to 11.

Everything was louder, from Bradfield’s yell to his guitar licks and even Wire’s backing vocals. Soon, Bradfield was gasping for air between songs, although, fatigue didn’t seem to affect his vocal range.

Having hit the necessary high points, the Manics wrapped up their set with “You Love Us” and “A Design for Life” and departed with a wave, a bow but no encore. That may have surprised some, but encores have always struck me as pretentious a bit over-the-top, although who is to blame is unclear. Fans, it seems, shouldn’t be forced to sit around and wait for the band to have a beer in the dressing room and bands shouldn’t have to put down those sames beers just because encores have become de rigeur.

Thankfully, Bradfield and company left after playing a consistent and just-long-enough set that will have audience members waiting for the band’s next appearance. Hopefully this time they return before 2020.