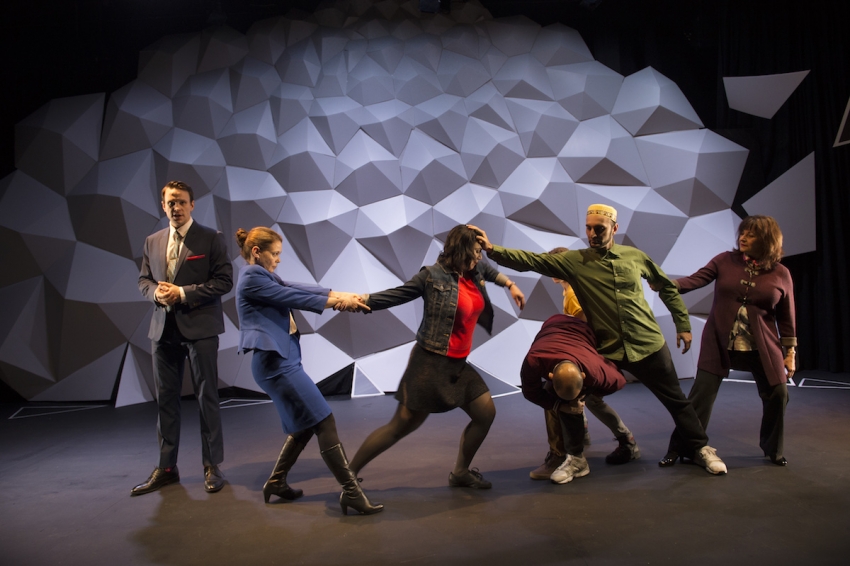 As soon as you enter the tight black-box confines of Gateway Studio A for Pi Theatre magus Richard Wolfe’s production of Long Division, you feel pinned to your seat by the giant white geodesic hemisphere of Lauchlin Johnston’s stage-filling set. It’s like being stared down by a compound, unnervingly geometric insect eye: whatever you’re in for, you know it’s going to be a far cry from everyday reality.

The feeling is only enhanced as the seven performers take to the stage in a stilted, stylized, slightly off-kilter moiré of march and counter-march. Chorographer Lesley Telford offers a kind of robotic parade drill to the synthesized strains of composer Owen Belton’s neumic, percussive score.

And then, to compound the sense of otherworldliness, the first utterance comes from the sprightly, bald, diminutive, ethnically ambiguous, rather androgynous figure of Nicco Lorenzo Garcia. He opens his mouth and out comes a stream of – heaven help us! – math, as lighting designer Jerguš Opršal and projection wizard Jamie Nesbitt unfurl a daunting blizzard of formulae across the geodesic scrim.

At least, we learn with some relief, Garcia’s character is not an actual space alien. He just talks that way because he’s a high school math teacher.

Even the exotic Afghan in the haj cap (Anousha Alamian) turns out to be just the struggling imam of an immigrant flock that has to convene in a school gym because it’s too poor to build its own mosque. So it seems we might, after all, be settling down to a tale as quotidian as some sort of high school byplay from any generic B.C. suburb.

But then there’s that ominous music and eerie choreography. Not to mention hints skilfully woven into playwright Peter Dickinson’s dialogue to suggest that something unspecifiably awful is about to happen. Or has already happened. Or might have happened. Or not.

It all takes some getting used to. Is Dickinson, an SFU English professor, just showing off his polymath erudition here with a Wikipedia core dump? (A temptation not wholly unknown to your correspondent).

And yet, and yet…The ellipses are apt, shapely and terse. And the plot, in the end, takes a surprising turn (I'll spare you any spoiler), which sustains the dramatic momentum.

As the storyline gradually emerges, Rashomon-style, each actor takes centre-stage with a first-person narrative, spell-bindingly delivered in an impressive testimonial to the professionalism of all seven cast members. Alongside each monologue, the other characters chime in with discursive marginalia and dithyrambic dance.

Well, it’s one way of recounting a tragedy – the oldest, time-honoured way, as it happens, dating as far back as the fifth century B.C. dramas of Sophocles. That's even before the Athenian tragedian's near-contemporary, Euclid, got around to codifying the elements of geometry.

Director Wolfe, who last treated Vancouver theatre-goers to a psychological thriller at The Cultch, has shown himself eminently capable of serving up the tense, linear tick-tock of a modern police procedural. But in Long Division he and Dickinson opt, instead, for the formalism and philosophical abstraction of a classic Greek Chorus precisely to create a little distance between the audience and the enormities on stage.

Only so, the theory goes, can we attain an exalted, cosmically resonant sense of our human passions. Drama, like higher math, is not a matter of arriving at a “right” answer. It’s about recognising beautiful, evocative, elusive patterns of connection.

Not for everyone, but Long Division works for me.