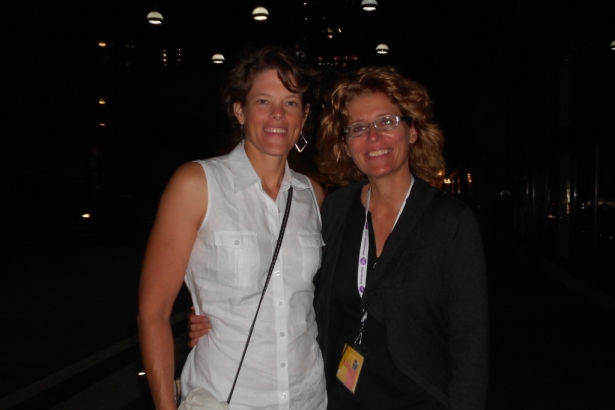 Vancouver- based filmmakers and producers Sharron Bates and Carmen Klotz had found the story of their dreams when they worked together on the movie Lace Bite, shown at the Vancouver Queer Film Festival  last Saturday. Forty hockey players played for 243 hours in 10 days  to raise awareness on Cystic Fibrosis, creating a  Guinness world record for the longest hockey game ever played.

“We were waiting for another story that we both agree, we could put our teeth into and there's the idea for Lace Bite came up when we heard about the event [on the news],” Klotz said.

The story of everyday people doing something extraordinary has always touched the two filmmakers, who sat down to speak with the Vancouver Observer after the screening of Lace Bite,  to talk about the challenges and joys of making the documentary and the heroines of the film.

CF is a congenital, fatal disease that affects primarily the lungs and digestive system. According to the Cystic Fibrosis Canada the lungs is where the effects of this disease are the most devastating as thick mucus builds up “causing increasingly severe respiratory problems.”

To date, there is no cure, and a lung transplant might be the only hope for some sufferers.

Keeping good on a promise

The originator of the “Longest Ice Hockey Game 4 CF” evet was a lesbian woman named Valerie (Val) Skelly , who had lost her best friend Lucia to CF in the ‘90s and promised her she would do something meaningful in her honour as well to help others with the disease. The idea of the mega charity hockey ice game came into her mind.

In the film, Skelly and her friend appear in n old footage up to the last days of Lucia. Skelly in a brief conversation post-show said she had 11 players on board at first.  Klotz later explained that   Skelly endlessly sought  the rest of the players by attending female hockey games and pitching them the story with a PowerPoint presentation without music, but effective enough to capture the hearts of the potential participants. To lecture the athletes on CF, Skelly used New Westminster resident and CF poster girl,  Eva Markvoort’s blog 65redroses.

An incessant advocate in the fight against CF,  Markvoort was slated as a spokesperson for this event, but sadly, she passed away in March 2010 at age 25.

When the athletes were gathered for the event, the teams were divided into Red and White. They camped in RVs at the parking lot of Canlan Ice Sports in Burnaby.  In the memory of Markvoort, they wanted to break the world record by a 65-minute difference, paying tribute to her 65redroses project. After much planning and preparing, the puck finally dropped on August 26,  2011.

Each player had four-hour shifts, making it hard for any player to get sleep. The players developed blisters, swelling and lace bite, but that didn't stop them from playing.

Along with the girls,  from the bleachers families with children with CF were present and cheered, hugged and cried with the players.

A 52- year old woman described herself a “CF survivor.” She had a double-lung transplant and vowed the girls as they made their way to the arena.

Not all of the players taking part in the game had family members or friends with cystic fibrosis. Some signed up for the game to break the world record, but Klotz and Bates explained that they needed a deeper motivation to continue in the battle against CF “because they were in so much pain and it was the fight to cure cystic fibrosis that kept them going.” 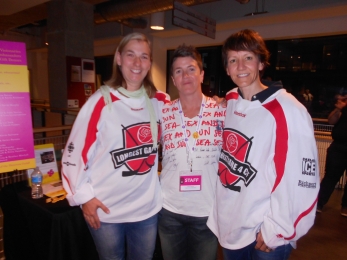 But both Klotz and Bates were hesitant about making the film, at first. They both knew that doing a charity documentary was  a “hard sell” and even sound unappealing to get funding and to get audiences to watch it. Yet, they went for it, independently.

“We knew that it was going to be a hard thing for us to do and -- but then, we decided that it was worth and we were gonna still give it a go, and then, we phoned Val, because we knew she was the originator of the event. We had a discussion with her and asked her if she would be interested if we documented it, and she jumped at the chance,” Klotz said.

The film is filled, with competition, bouts of  tears and laughter, pain and humour. It  showcases the unbridled spirit of 40 women who put everything else on hold for 10 days as they played hockey for a cause.

The filmmakers say audiences have been moved by "Lace Bite" and htat the film is already inspiring people to do something for Cystic Fibrosis and other illnesses.

After two years since the project took off ground, the filmmakers sighed with relief.

“It's a relief and we are motivated to have it seen not just because of the work we put in it , but it's a cystic fibrosis awareness film. [...]Very few people would know what they [the girls] did if it wasn't documented on film, but it speaks to what anybody can do, if they put their heart into it, ”Klotz said.

“Including us,” Bates added enthusiastically.