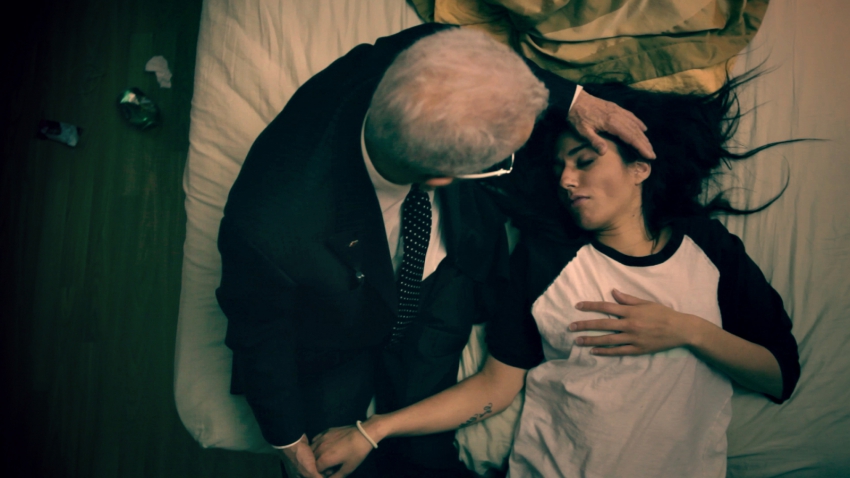 The film Turbulence, which won a nomination for “Best Canadian Film” at the Vancouver International Film Festival (VIFF), tells the harrowing tale of Jina, a woman in her late 30s, who came to Canada with her father Sherzad from Iranian Kurdistan.

Even though she's safe in Canada, Jina is haunted by the disturbing memories of the Iran-Iraq War, and has succumbed to hard drugs to deal with her pain.

When Jina disappears, Sherzad -- an electrical engineer and a translator at an immigration services office -- desperately searches for her. He tries to save her from her demons by taking her to a rehabilitation centre, hoping she will stop her substance abuse once and for all.

Turbulence is a powerful film about the long term effects of war on children and their struggle to survive as adults.

Vancouver-based filmmaker Soran Mardookhi, knows first hand the damage that war inflicts on young minds. Born in Iranian Kurdistan, used to live near the Iran-Iraq border and was a child when the war broke out in 1980. He remembers the chaos and violence that the war brought to his community.

“War was all I knew, and had a deep influence in me as a child,” Mardookhi said in a phone interview. “So I always wanted to make a film about the people that [have] lost their loved ones or have been traumatized by the war.”

While making the film, Mardookhi was almost certain that nothing like that would ever happen again to the Kurds.

“But unfortunately, the story is repeating,” he said sadly.  For this reason, he dedicated his film to the Kurdish Peshmarga group, who are battling the ISIS terrorists.

Mardookhi goal’s is for the audience to think about the future of the children that now are living in the midst of a war in their countries.

“After I immigrated to Canada, I started to think ‘what if I bring a person who has had the experience of war and genocide to Canada?’ […]’would they be able to forget their past and rebuild their life here?’ So this question was my main inspiration to write the script.”

While living in Kurdistan, Mardookhi had worked as filmmaker for more than a decade with several shorts, documentaries and a feature film under his belt.  But as a new immigrant in Vancouver who didn’t know English, it was a completely different ball game.

In 2012, two years after his arrival, he was ready to crystallize the project with the help of his friend Majid Baghiry, a local filmmaker, for pre-production and production. The other full-time members were editor Puya Khalili and score composer Sadaf Amini.

However, the biggest challenge he encountered was financing Turbulence -- there was virtually "no budget" except for things such as catering. The film is the product of a supportive network of friends from the Kurdish, Iranian and other Canadian communities, who volunteered their time, and even lent their homes and cars for the project to come to fruition.

While writing the script, Mardookhi had in mind the actor Kamal Yamolki to play Jina’s father. “I knew he would be perfect for it .”

On the other hand, he only held one audition to find the lead character, Jina. Finding Jina proved to be much tougher. Originally, Mardookhi wanted to cast an Iranian Kurdish actress for this role, but with a small community of a few thousand living in Vancouver, the chances of finding a trained, experienced Kurdish actress was very slim, if not impossible.

“It’s a really difficult role, I can't trust amateurs or people who don't have any experience in the movies. That's why I decided to find someone, even if they are not Kurdish,” Mardookhi explained. Thus, Indo-Canadian actress Camillia Mahal was cast for the role.

For the rest of the cast, Mardookhi did the selection after viewing online demo reels sent by actors.

With Turbulence under his belt, Mardookhi has reignited his filmmaking career. He is now working on a documentary in Iranian Kurdistan, and also in Iraqi Kurdistan. He's also in the developing stages of a a new drama that will be shot in Vancouver.

Turbulence will be shown at the International Village on Oct 3 (6:00 pm) and Oct 5 (1:00 pm), with director attendance. For more information visit: www.viff.org