Stand Clear of the Closing Doors: an autistic boy's journey 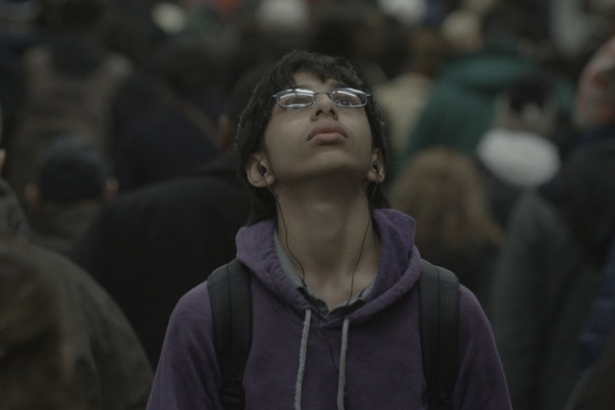 Stand Clear of the Closing Doors tells the story of Ricky, a 13-year old autistic boy, who lives with his family in Queens, New York. He gets lost for 11 days in the New York subway after his rebellious older sister, Carla, fails to pick him up from school.

Ricky’s journey is propelled forward when he is scolded on the phone by his mother Mariana, an undocumented Mexican immigrant who supports her family by cleaning houses.

The boy's attention is later distracted by a red dragon sign (an Ouroboros, or dragon eating its own tail), which is a symbol for the boy's own process of self-discovery. Over the next week, Mariana frantically searches for Ricky, while the threat of Hurricane Sandy looms in the background.

“I've been always interested in autism," U.S. director Sam Fleischner said in a phone interview from New York talking about his second feature-length drama, which premiered internationally at the Vancouver International Film Festival.

Cases of autistic children running away and getting lost in New York's complex 20-line subway system are not uncommon,  Fleischner explained, but he’s never seen their journey explored in film.

“I just thought it would be an interesting story to explore in a movie.”

Stand Clear’s plot is based on the real-life case of Francisco Hernández Jr., a 13-year old with Asperger’s syndrome who was lost for 11 full days in New York in 2009. The film was shot in Rockaway Beach, Queens, where Fleischner lives.

Fleischner described the filming as “difficult” and “nearly impossible,"  but said it offered many opportunities to craft realistic scenes on a subway. Some of the extras on the train were ordinary transit riders who agreed to work with the director.

He said there's legally no need to obtain permits to film in New York City’s subway, as long as there is no tripod involved. He made sure to keep a copy of  the Metropolitan Transit Authority’s rules to show police officers when they asked for permits.

But instead of nosy police, Hurricane Sandy turned out to be the crew’s biggest hurdle to shoot the film. After three weeks  filming, they put production on hold for 15 days as the storm whipped through the city. The subway was shut down for several weeks, and there was no electricity in Rockaway. The last scenes ended up being shot with a power generator.

“The whole landscape had changed," Fleischner recalled.
"We had to reassess our approach to the film, so I re-wrote the ending and incorporated the storm into the story."

The director also captured harrowing images of the hurricane hitting the city, and incorporated them into the film.

Fleischner said the storm allowed him to explore the “cycle of creation and destruction," which mirrored Ricky's own process of falling apart, then being put back together during his journey on the subway.

To find the right actor for Ricky, Fleischner chose to cast an autistic teen boy as opposed to a child actor, in order to accurately portray the condition on film.

“I didn't feel confident that I knew what it would be like to have this condition, so I thought this would just be more honest,” Fleischner said of his decision.

The casting director posted ads on online Asperger’s forums, looking to find candidates with the syndrome. Around  150 children auditioned in  New York, but he still couldn't find the right child to play Ricky.

In New York, the number of children on the autism spectrum in the Latino community is very small, Fleischner pointed out.

"In the Latino community in general,  I think there is a stigma around any kind of disability. A lot of these (autistic) kids are undiagnosed,” he said.

It was a whole new learning experience for both director and actor, but Sanchez-Velez fit right into his character and delivered a seemingly effortless performance.

“I think [Jesus Sanchez-Velez] had made up his mind to open himself to new things and new people and personalities,” he recalled.

New York-based Mexican actress Andrea Suarez Paz also shone in her role as Mariana, Ricky's mother. Fleischner met her by chance in a Brooklyn park in 2011. At the time, Fleischner hadn't still found his leading actor, but Suarez  offered her input and helped him with the script during that time.

In his film, Fleischner also touches upon the issue of illegal Mexican immigrants in the U.S.. Fleischner had visited Mexico two years ago and was amazed by the country's culture, which he found to be completely different from that of the U.S., even though the two countries were geographically close.

Fleischner said he felt that undocumented Mexicans “are often like ghosts", invisible to mainstream society.

In the film, Mariana refuses to call the police about her missing son to the police as she fears deportation. Yet, when she finally does, she discovers that the police make very little serious effort to find Ricky.

“In real life, if this was a white kid, I don’t think he would have been missing for as long," Fleischner said, noting that the incredible length of the child's absence highlighted how people pay attention to certain people differently.

The act of "paying attention", in essence, is what Fleischner like viewers to take from his film.

"I'd  like people to watch this movie and pay more attention to each other, to look at the world in a slightly different way," he said.

Stand Clear of the Closing Doors will screen again this Sunday, September 13, at the Vancity Theatre.   For more information visit, the VIFF website.