Just Eat It, an exposé on food waste 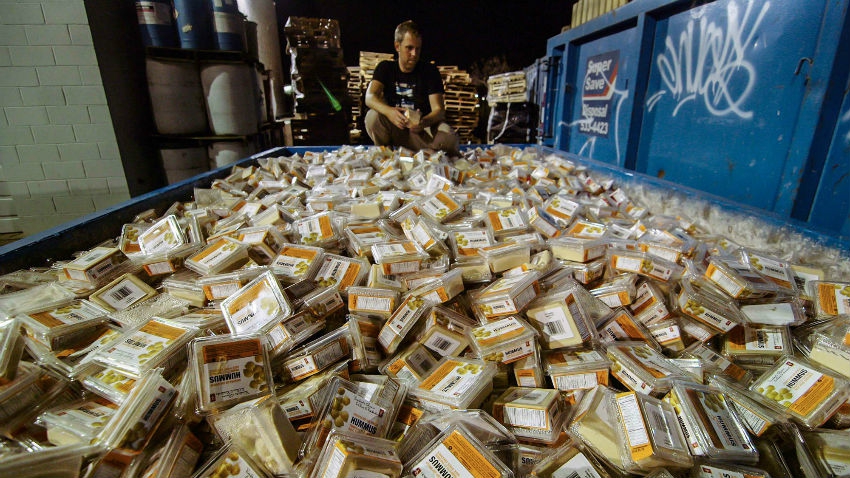 Grant Baldwin in a scene of Just Eat it, looking atonished at the thousands of wasted humus.

Just Eat It is a powerful documentary that follows director Grant Baldwin and his wife, producer Jen Rustemeyer, in an experiment: to eat only   discarded food for six months.  Last Saturday, the film  won the VIFF Impact Award, and the screening spot at the BC Spolight Gala.

Baldwin was inspired after reading an article over a year ago saying  that 40% of the food is wasted, but he wasn't that convinced of the numbers.

“I just found it  a little bit unbelievable.  As a filmmaker, I thought it would be great, to sort, of to try to find out how it actually looks like because you hear all the  stats and its numbers,  but you don't actually  see it how  it looks like,  to see how food is  wasted,” Baldwin said in a phone interview from his home in Vancouver.

One of the things that impressed him the most was the quality of the food -- while still edible, the final destination was often the garbage can,  "when it could have been feeding people or livestock."

Obscene discarding food or leaving food in your plate is widespread in wealthy nations and socially accepted.

The starting point for the filmmakers was Baldwin’s brother’s house.  His brother was moving at the time. The couple took the good edibles from his  fridge, these were items piling a byproduct of constant runs to the grocery store, instead of cooking with what they already have or only buying only what it's needed. This was a pivotal moment for Baldwin and Rustemeyer, a realization that a great part of the food waste starts in our own kitchens.

“That kind of opened up our eyes. The whole other side of the food waste that it's not only the industry, [but] it's also what  we are doing in our homes, and it turns out that, of that half of food waste is in our homes and how we behave when we go grocery shopping”.

When they started, they were having  little luck with small grocery stores,  but  had to expand the experiment to six months, because of the monstrous amount of food they started  to find near the end of the  month. The majority of the food they found was on the whole sale level, discarded in big compacters.

"This is food that hasn't even gotten its chance to  reach the customer yet and it's being discarded typically because of the date labels,”  Baldwin said.

Date labels are misunderstood --there is a variety of them, as the sell by  and best by labels. The mindset is such that people panic once thing would go rotten a day after the expiration day.  Or to choose the prettiest banana of the pack.

Fruit and vegetables are also subject to  merciless cosmetic standards that  are imposed to producers and vendors to sell not only the best, but the best looking fruit or vegetable they’ve got. The rest get thrown away even before reaching the stores.

Why food is thrown away and not donated? Another mind boggling statistic for Baldwin. Markets fear of being sued, that's what they say. In reality,  that’s not the case. The rules in Canada are similar to the US, only that here it’s per province, “so every province has some kind of legislation that says if the food is still decent and you donate it to non-profit you are not liable."
The only edible item regulated by the government is infant formula.

One reason for this, is the  cost of transportation and distribution, so it's easier to throw it away.

“[It’s difficult] when you want to be creative and you are trying to survive on food waste [and] you know, our grocery shopping started at midnight,” Baldwin said with a laugh.

Getting access to supermarkets was also challenging.  They tried every supermarket in town, but only one let them in with a camera.

“They don't want to be exposed, but at the same time everybody’s wasting [food], so we are all on the same boat. In the end Choices market allowed us to come in and film. They were open minded with that,” Baldwin explained.  On the other hand, Whole Foods had already agreed to let them film in their premises, but they bailed out in  the very last minute.

Thanks to contacts,  Baldwin had access to  farms in California. “Those farmers are great to open up and explain their view, because it's very easy to make them look bad. But they realized  that it's something they wanted to tell too,  I mean most  of the foods from their lands are being wasted.”

The film is dynamic, humorous, informative,  very well documented with poignant interviews and statistics with high production value, great editing (also by Baldwin) and flowing narrative.  While still a micro-budget movie, Baldwin explained they allocated a good chunk of it on production to give it more credibility and raise awareness and “to balance the fun story of Jen and I with something big scale.”

For the film, Baldwin and Rustemery enlisted food waste experts such as U.S. author Jonathan Bloom and Tristam Stuart, an   author and activist from the U.K, as well as fruit producers and farmers in California, a pig farmer near Las Vegas who feeds his swine with compost food and others. The documentary was shot in Canada, the UK, and the US .

Baldwin said that this experience has changed some of his and Rustemeyer's grocery shopping and eating habits.  He said his fridge is empty now, since they are travelling, promoting the film. And they don’t sort anymore fruits and vegetables.

“We realize all the stuff you see in front of you has gone through a lot of eyes to  get there [already].” He admits, “ But it’s not easy, those kind of behaviours are hard to change.”

After they  finish  promoting the documentary ,they  will work in a new film targeted for schools with teenagers in it, as well as other initiatives with high school students to fight the unnecessary waste of food.

Just Eat It  will have an encore presentation during  the VIFF repeats as well as will hit commercial theatres soon. For more information: www.viff.org.