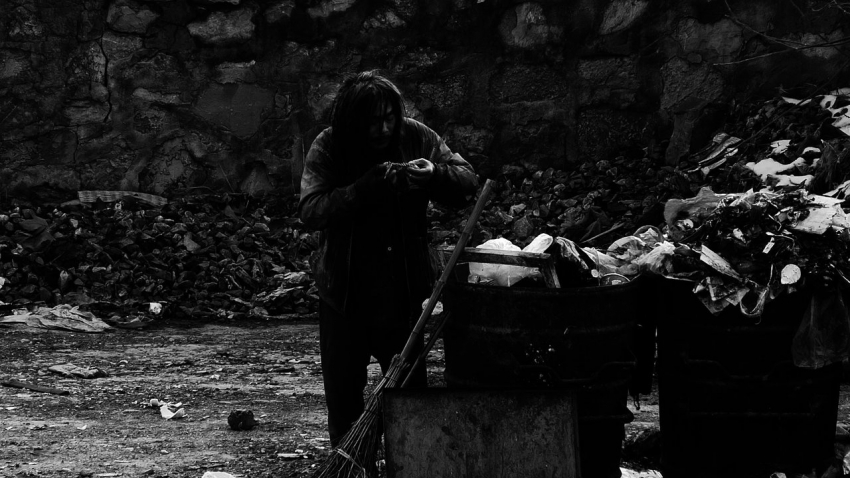 Tracing the 6,000 km course of the Yangtze River, independent filmmaker Xu Xin – director, cinematographer and editor of the banner documentary in the Asian-themed “Dragons & Tigers” subset of this year’s Vancouver International Film Festival – presents a telling transect of New China.

In so doing, he shows himself a worthy heir to Chang Tse-tuan (1185-1145), author of China’s most famous classical painting, Ascending the River for the Ch’ing Ming Festival. That masterpiece follows the Pian, a Yellow River tributary, to depict the vibrancy of the Sung Dynasty capitol, K’aifeng and environs – arguably the cultural apex of Chinese civilization, if not the entire Holocene epoch of recorded human history.

But that was then. We’re in a new epoch, now, the Anthropocene. And once again China leads the way, revamping (or “terraforming”) the very bones of the planet.

So, to match this heroic undertaking, Xu has scaled up his “scroll.” In lieu of the Ch’ing Ming picture’s 11 metres of silk, Yangtze Landscape clocks in at 160 minutes of film. Other differences are equally telling. Instead of Chang’s delicate palette of coloured inks, Xu makes do with black and white, plus a whole rainbow of grainy greys in between.

Such humans as do appear in Yangtze Landscape are markedly different from those in the Sung scroll, too. Instead of masses of miniaturized manikins from all walks of life bustling about their holiday business, Xu homes in on intense, slo-mo, close-up portraits of just a handful of mostly marginalized down-and-out idlers lollygagging amidst the riverside flotsam.

These characters “got plenty of nothing,” but still manage to convey a sense of plenitude in the elaborate attention they devote their little all. Each dotes on a private stash of some nitty gritty treasure that’s all-but-invisible to the rest of us.

A trio of clochards, cosily at home under a viaduct opposite the gaudy panorama of downtown Chungking, lavishly spoil a gaggle of stray mutts. A young woman rolls in sandbar mud, extravagantly wailing some private, nameless grief.

One sly oldster, after a supper of steaming garbage stew, pulls out an attaché case full of paper money – “spirit scrip” used as burnt offerings in Chinese funerals. He gloatingly counts out the bills, each emblazoned in Chinese with the logo of the issuing institution, the “Bank of Heaven and Earth.” On the back, in English, the bills are denominated simply as “Hell Notes.”

Each of these vignettes is served up with no comment or back-story – just another numbered benchmark on the long countdown to the Yangtze’s official “zero kilometre” in Yibin Port, at the confluence of the Min and Jinsha tributaries.

Along the way, we’re offered a few jaded glimpses of the glitzy, modern “Chinese miracle,” as well. Scores of bored-looking matrons, erstwhile residents of Old Fengdu (now drowned under the Three Gorges reservoir), fan-dance in a plaza of the sterile New Fengdu that’s replaced their original hometown. A grating waterfront combo belts out “I love you more than I can say” to the passing dinner-cruise boats.

In their minimalism, composers Gareth Davis and Frances-Marie Uitti well match Xu Xin’s spare cinematography. No pans or zooms here; just static, tripod-mounted camerawork ashore and the flow of the current and the bobbing of the deck for the river shots.

Equally austere is Xu’s editing. Every scene is stretched a little beyond our comfort level, to drive home the hubris of the whole terraforming enterprise and the grimness of its “collateral damage.” Not to mention the tedium of life along the reconfigured Yangtze, viz. an excruciatingly drawn-out wait for the water level to rise in the Three Gorges canal locks.

For continuity we’re only offered news clips of China’s natural disasters, palace coups, corruption probes, construction injuries and riverine mishaps during the terraforming heyday. Plus translations of the ubiquitously bannered slogans urging Yangtze denizens to work hard, keep their heads down and ungrudgingly accept the disruptions to their livelihoods and environments.

After all the build-up to the “zero kilometre,” Yibin turns out to be a stark anticlimax – just driving rain on cracked concrete piers, with a sullen, simian idler splashing aimlessly from puddle to puddle. But then Xu continues on another 3,000 km up to the “unofficial” headwaters of the river – past the upriver rapids where human trackers once pulled landlords’ pleasure boats, past the newly built Beijing-Lhasa rail lines that are tipping the ethnic balance of Tibet ever more steeply towards Han dominance.

We ends up, to the tune of growling Buddhist chants, on the Qinghai plateau in the Tibetan “Autonomous Precinct” (something akin to an “aboriginal reserve” in Canadian parlance). There, at the actual, sacred source of the Yangtze (or the “River of the Mother Yak,” as it’s called in Tibetan), the snow-fed waters remain pristine. For now.