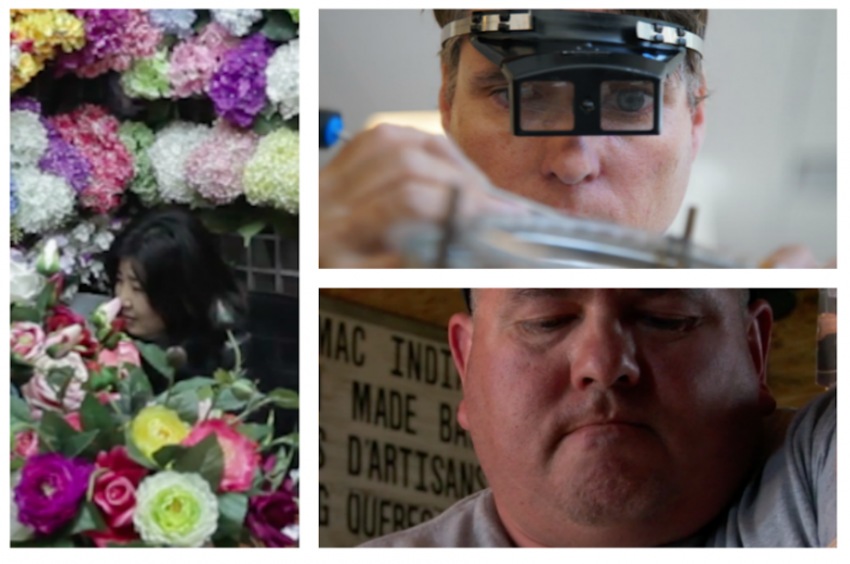 It’s easy to lose sight of, but in DOXA, as in Life, oftentimes less is more.

Some of the strongest entries in this year’s Documentary Film Festival weigh in at barely 10 minutes, on average.

This allows them to avoid the Discursive Curse – the ballast of talking heads which bog down so many of the feature-length disquisitions in the DOXA line-up. Short DOX filmmakers have no choice but to show, rather than tell, their stories.

Watching a whole matinee of such fare is a guilty pleasure, like consuming a box of chocolates at a go. And yet, cumulatively, these bonbons can be as nutritiously content-laden as the weightier, more balanced “blue plate specials” on the DOXA menu.

To prove it, Festival organisers have grouped five sets of them thematically. Vancouverites will find a lot to recognize in today’s “City Voices” offering: well-known Rain City vignettes and even a few local celebrities. Another programme, “Transference,” explores how we map our physical settings onto our emotional landscapes.

“Everything is Performative” brings terpsichorean flair to such seemingly un-danceable venues as a Norwegian sheepfold or the City of London financial district. Then there’s “Creature Comforts,” about the complex bonds between humans and the supposedly “dumb” beasts that share our biosphere.

But among these Short Suites, my favourite runs at 3 p.m. this afternoon (Thursday, May 11) at The Annex, 823 Seymour Street. Entitled “Stuff,” its quartet of films, totalling less than an hour in length, probes our range of relationships – masterful or servile – to the material world of inanimate things we make, own and use.

The mini-doc that tops my own, personal roster of mini-accolades (the V.O. Palmetto d’Or?) is Jessica Kingdon’s 11-minute gem Commodity City. It’s set in the world’s biggest wholesale bazaar of consumer non-durables, the Yiwu International Trade Mart in Zhejiang, China.

This is the wholesale fountainhead of most of the world’s Xmasware, hooks&eyelets, nixies, plastic toys, stuffy dollies, lucky door charms and nearly half a million other (mostly cheap and chintzy) products. With 62,000 booths crammed into its four million square metres, you’d almost expect the bazaar to be a teeming little city in its own right, throbbing with urban energy.

But no. Rather Kingdon ingeniously projects a sense of crushing ennui.

Each fleeting scene is a tiny diorama, a claustrophobic still life in a box. The camera stays fixed, focusing front-and-centre on each stall in turn, to display a geometric grid of faux foliage, ticking clocks, flashing lights, grinning toys, tinsel-daubed calligraphy, googly-eyed Santa elves – whatever.

It takes a second to spot the human[s] in each array – dead-eyed and stock-still, like lurking basilisks, often betranced by their tablets or computer screens, surrounded by their wares. Babes-in-arms amuse themselves by idly crumpling banknotes. A boy picks his nose and passes the resultant boogers up to his distracted mother. Obese children idly gorge on KFC nuggets.

In other words, nothing much happens. Yet not quite 700 seconds of this nature morte is enough to generate a kind of bemused dread. How can such a Sargasso Sea of boredom brew up such a swelling tsunami of schlock?

After the schlockwaves break and recede on the far shores of Canada, Cat Mills’  Fixed! affords a hopeful glimpse at what becomes of some of the beached flotsam that’s left behind.

In a quixotic rear-guard action against the globally rising tide of throwaway culture, some 1,000 community-based “repair café’s” have sprung up where volunteers undertake to resuscitate the broken-down detritus of any and all comers. Fixed! ushers us into one such séance in Toronto.

It’s a sure-fire film premise: one-on-one problem-solving interactions between a half-dozen volunteer fix-it wizards and their drop-in “clients.” A toothy senior citizen wants her vibrating hairbrush revived (“I used to use it everywhere!” she mourns). A butch hipster brings in a comatose animatronic turtle. A family Bible suffers from a broken spine. A boombox has lost its boom.

The camera cuts back and forth from one vignette to the next as the fixers close in on solutions. Over the course of just 14 minutes, we become so embroiled in each of these little dramas that it’s impossible not to share in the general triumph every time there’s a new reprieve from the landfill.

The shortest item on the “Stuff” bill is Québecoise director Heather Condo of the Micmac Nation filming her husband, Stephen Jerome, crafting a basket from start to finish. In just seven minutes, we track him each step of the way, from selecting and felling a black ash tree to splitting the trunk, shearing it into strips, carving the ribs, shaping the frame, interweaving the strands and admiring his handiwork.

It’s a work of performance art as much as material craftsmanship. The finished basket stands in a generational lineage, just like Jerome’s inherited kit of hand tools, impeccably adapted to its function.

In the hands of its maker, the one-of-a-kind basket practically glows with the authority of its legacy. It hardly even seems an inanimate object, let alone a fungible commodity – a whole other order of “Stuff.”

We’re a world away from the Yiwu market.