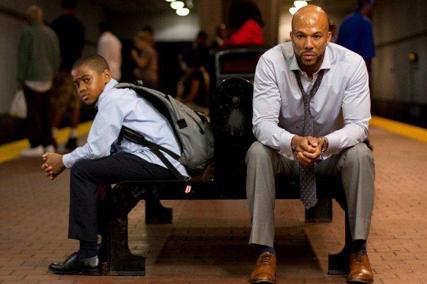 What starts off as a day of male bonding and rights of passage quickly transitions into unrelenting exposure to the often violent realities of life in low income, urban Baltimore.

Despite the setting, the film avoids dependence on plot and instead focuses on a child's struggle to confront the myth of the infallible parent.

Woody's own father is absent and his mother abandoned him to live with his grandmother and uncle. The absence of his mother is explained at the end of the film, but tense glances between adults suggest Woody's persistent requests to visit are denied in an effort to protect him.

The plot kicks in when Vincent offers to drive Woody to school and pesters him about the girls in his class. In an effort to impress his uncle Woody retorts with uncharacteristic attitude, "I be hollerin' at shorties all the time," only to have his uncle catch his lie when he refuses to actually approach a girl who is eying him. His uncle firmly asserts that Woody should never lie to him, and then decides Woody needs to spend the day learning about "real world shit". The scene is tense and emotional as Woody attempts to anticipate his uncle's expectations only to be scolded for his lack of character.

Similar scenes continue throughout the film, though they gain intensity as the day progresses into increasingly dire circumstances. Vincent has chosen to take Woody with while he attempts to secure a loan for a crab shack only to find Woody and himself caught-up by the life that landed him in prison.

Vincent is a character determined to start over and is guided by the idea that there are two kinds of people in the world, those who own and those who rent. Vincent is determined to be the owner of a piece of the American Dream but can't escape the pull of his circumstances. He operates as a consequentialist, lying and manipulating to get what he wants, often in conflict with the lessons and character he attempts to instill in Woody.

Woody is a perceptive 11-year-old who repeatedly questions his uncle's contradictions. His character is different from the hardened-from-birth kids you might see in Baltimore-focused television show, The Wire. When he witnesses severe violence, presumably for the first time, he is rendered non-functional and is temporarily emotionally shattered. Though as the day progresses and he is exposed to more his character becomes calm and rational in high-stress and volatile situations, going so far as to negotiate a drug deal with the most feared drug dealer in his area.

Woody's exposure is condensed into one day but his character alters significantly as a result, begging the audience to wonder about the kids who experience comparable exposure on a daily basis.

The film is one incredibly tense experience after another, though it does feature lighter scenes of sentimentality as Vincent teaches Woody to drive, crack a crab and watches Woody tastes his first beer.

The conclusion of the film was uncharacteristically fanciful. In all, the film is a coming of age story set against the love between a boy and his uncle.

The Sundance London Film and Music Festival runs from 26-29 April at The O2. For further information and tickets visit http://www.sundance-london.com/