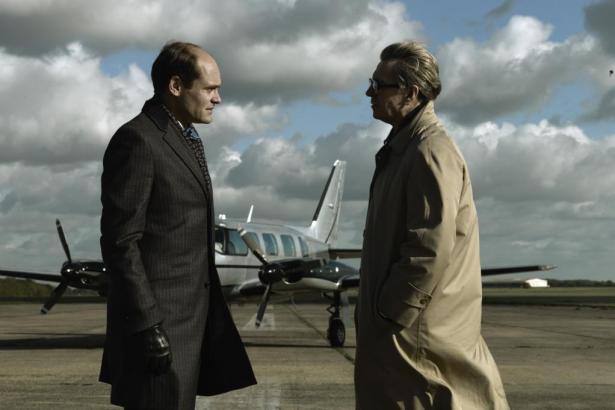 After an agent is captured on a doomed assignment in Hungary, Smiley (Oldman) and his boss, Control (John Hurt) are forced to resign from the Circus; a branch of the British Secret Intelligence Services.  A year later Smiley is contacted by the Ministry and tasked with finding a mole (double agent) within the Circus that has been supplying information to the Soviet Union. This means Smiley will have to investigate his former colleagues Haydon (Colin Firth), Alleline (Toby Jones) Bland (Ciaran Hinds) and Esterhase (David Dencik). Oldman is joined and aided in his pursuit by Peter Guillem (Benedict Cumberbatch) and Ricki Tarr (Tom Hardy).

Low on action, high on intrigue, the story is about the who, what, where, when, how and why of international espionage. Its geography is a series of sound proof rooms, secret meetings, and darkened corridors. Its gadgets, a collection of tape recorders, sound recordings, chess pieces and microfilms. All of which are used and conducted against a wretched seventies background of orange, beige and brown.

Tinker Tailor isn't the spy world of Ian Fleming's James Bond or Robert Ludlum's Jason Bourne. With the exception of Ricki Tarr (Hardy), there isn't a single comparison to be made among the characters on display. Instead, John Le Carre's spies are dull, fusty, decaying and avuncular, a gaggle of haemorrhoid, alcohol, and paranoia ridden middle aged men, whose war is fought from the confines of a cold, austere, office building in Kensington, London.

As with many puzzles, you have to look beyond the obvious. The mole’s identity becomes pretty clear very early on, but the key pieces – what the mole is giving away and who effectively gives it away by the decisions they make are not.

The combination of sad men conducting mental battle in suits, ties and ill fitting shoes is what makes the story so captivating. There is a sense of tragedy attached to these men and their lives. And there is something compulsive about this chess game played over and under a heavily armoured table.

Tinker can also be seen as an exploration of a person’s double sided nature. Every character in the film seems to work for themselves and for more than one side. In this sense, the desire or need to pick a side is redundant. Everything has another side which means the film is as much about the casualties and results of this effect: the loss of life, the breakup of marriage, the ending of partnerships, staff resignations, dereliction of duty, and the final breakdown of sanity.

On a core level, Tinker is about the small moments where big decisions are made, and the area where right and wrong are not only blurred, but they are actively running hand in hand.

Taking a classic mid-seventies novel such as this and crafting it into something that plays for modern audience is a fantastic sense of achievement. The results make Tinker Tailor a divisive yet marvellous film.

Tinker, Tailor, Soldier, Spy is released on DVD and Blu-Ray on March 20.