Cullen family and a couple of werewolves drop in to film preview. 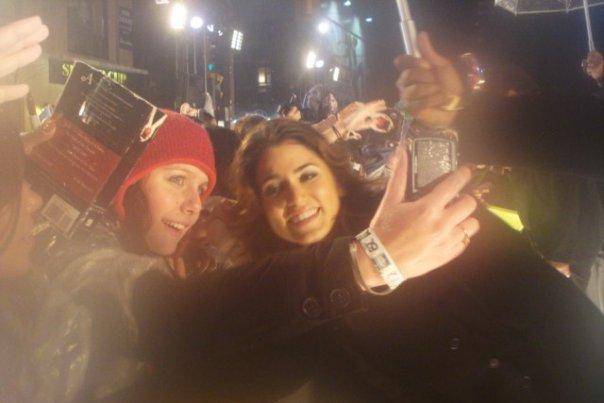 If you camp out early enough, you never know who might turn up to shake your hand.

That was Twilight fans lined up for an early morning preview of the latest installment of their favourite movie series.

SAN DIEGO -- Early risers among "Twilight'' fans have gotten a chance to see what some of their big-screen idols look like first thing in the morning.

Not long after dawn broke Thursday, Ashley Greene, Nikki Reed, Elizabeth Reaser and other co-stars of the supernatural movie franchise made a surprise visit to greet fans who had camped out for days to catch a preview of the next "Twilight'' flick at Comic-Con.

Greene, Reed and Reaser, who play members of the Cullen vampire family in "Twilight,'' were joined by Julia Jones and Boo Boo Stewart, who co-star as kinfolk in the rival werewolf pack.

The actors signed "Twilight'' posters, mugs and other movie memorabilia, posed for pictures with fans and even served some breakfast goodies to "Twi-hards,'' some of whom were in line since Monday afternoon to get into the preview at Comic-Con, a massive gathering for fans of comics, video games, television and film.

"I am a morning person, but this is definitely early, getting up at 4:30,'' Reed said. "But when people have been camped out since Monday, you just feel it's a good idea to come out and surprise them.''

"I feel like this is our time to get out and have actual experiences with fans,'' Reaser said. "Being out here with them makes me feel the films are special, important and really mean something to them.''

Seven friends, including Monica Foltz, 26, of San Diego, and Candie Hattori, 37, of Ewa Beach, Hawaii, were first in line. They tried to camp out in front of the San Diego Convention Center as early as Sunday but were told by security officers that they had to leave. They came back a day later and were allowed to stay, securing the first spots in line among a rush of other fans.

"A bunch of people all got here at the same time. It was a matter of who pounced first,'' Foltz said.

She and her friends, along with hundreds of others, gasped in surprise and began clapping and cheering as the actors arrived.

"Oh my God!'' one fan shouted to friends after she got Reed and Greene to sign a poster for her.

"Unbelievable! My heart is racing. It doesn't matter how old you are, you still feel that little twitter,'' said Hattori, who got the stars to sign her Comic-Con badge and a laminated cut-out of "Twilight'' star Robert Pattinson that she and friends around the country mail back and forth to one another. They call it "travelling Edward,'' after Pattinson's vampire character, Edward Cullen.

Pattinson and fellow stars Kristen Stewart and Taylor Lautner also were in town for the Comic-Con panel offering fans a look at this fall's "The Twilight Saga: Breaking Dawn: Part 1.''

Fan reflects on meeting Twilight cast and crew in B.C.