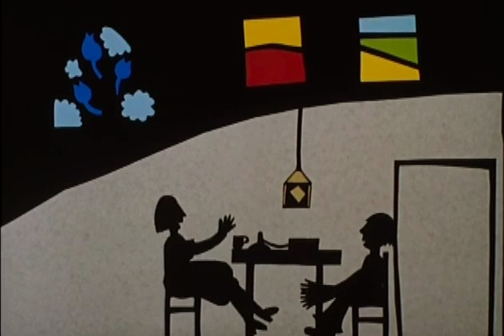 Film still from The Florestine Collection

Released in April of this year, The Florestine Collection follows the story of experimental animator Helen Hill as she and her husband Paul Gailiunas, navigate art and life in New Orleans. Mirroring the innate charm of Helen’s favourite city, Paul’s cheery voice explains the day Helen finds a bag of dirty, hand-sewn dresses in the trash behind their home.

Recorded on film, and cleverly utilizing Helen’s wonderful cut-out animation, she begins to trace the life of the woman who crafted and wore the dresses. Each dress was sewn together with great care, using bits of old fabrics, mismatched buttons and bright colours.

The first time we hear Helen’s voice, it is tiny and sweet. She is speaking to members of the church where Florestine, the dresses' “jolly” owner, attended mass every Sunday. Voice is the only tool used to identify characters, alongside crafted still photographs and footage, much of it taken following the birth of their daughter.

Helen’s love of New Orleans is strongly reflected in the city’s ability to provide her with endless inspiration.

There is a constant uneasiness about The Florestine Collection that is not immediately identifiable. This story is ultimately about Helen, but her voice is missing from the majority of the narrative, creating a mysterious tone that lies just beneath the surface of their “charming life”. Cracks begin to show, as Paul states, “changes in the neighborhood” begin to happen and when Hurricane Katrina hits, the family flees to Paul’s hometown in the Midwest.

Following the after-math of the hurricane and the family’s “exile” from New Orleans and their home, they return to assess the damage. Nearly eight feet of water has flooded the home but Helen refuses to throw anything out until they have gone through it all meticulously, including the dresses which had once again been found in a garbage bag, wet and delicate. Many of the dresses had fallen apart, unable to survive another bout of neglect while some were salvaged by Helen.

Poems, journals, photographs and personal treasures were all lost to the flood waters. The family decides to leave New Orleans, but Helen’s love of the city could not keep her away, despite Paul’s concern of the shifting nature of the city, the violence and anarchy that sprung from the aftermath of the disaster. Eventually, the family moves back to live in another part of the city within an artist community, yet the uneasiness remains.

Despite its 30-minute run time, the pacing of the story gives you a much deeper and personal sense than is usually permitted with a short film. In what seems like an instant, we learn that an intruder breaks into the home in the middle of the night, and shoots and kills Helen. A mood of shock and sadness flooded the audience. Viewers had become friends with this lovely woman, and she is taken away in a fleeting moment of tragic circumstance.

Paul is touring with the film in honour of his wife and using her work and this film as a legacy of her spirit and also as a delicate assessment of the socio-economic impacts of Hurricane Katrina on a once-thriving city. Reduced to desperate crime, glimmers of hope reside with re-built communities and the memories of people like Helen and her unconditional love for New Orleans.

Visit helenhill.org to learn more about Helen Hill's legacy and The Florestine Collection.