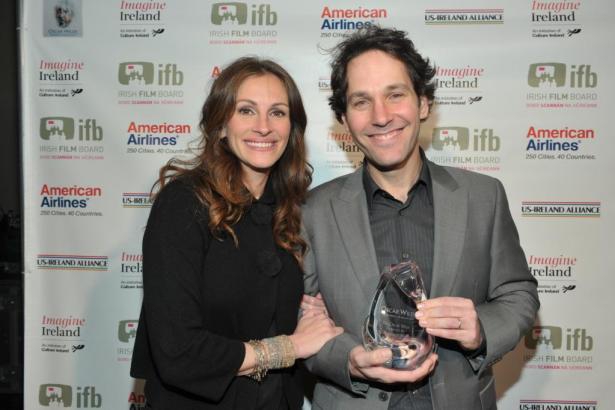 In October of 1882, Oscar Wilde arrived by train in New Brunswick to give a lecture on "The practical application of the principals of the Aesthetic Theory to exterior and interior house decorations, with observations upon dress and personal ornamentation." The event was not only sold out, but some of the younger audience members wore sunflowers in their buttonholes and stamped their feet. Wilde himself is said to have worn "a velvet suit, frilly shirt with ruffles on the sleeve, knee-breeches, grey or black silk stockings, and silver-buckled shoes." During the lecture, Wilde said, "I do not know a greater heroism than that which opposes the conventionalities of dress; the sombre dress of the age is robbing life of its beauty and is ruinous to art."

One wonders what Wilde would have thought of the present day filmmakers and their penchant for wearing black!  Each spring, the US Irish Alliance honors Irish artists who have made astounding contributions to film.  Created more than a decade ago by visionary Trina Vargo to reinforce the already strong relationship between Ireland and the US, the Alliance has more than once given an award to an artist who is not Irish at all but whose contribution has won them the title of "honorary Irish.

Such was the case at this year's awards when surprise guest Julia Roberts presented actor Paul Rudd (Knocked Up, Forty Year Old Virgin) with the "Honorary Irishman" award at the 2011 Oscar Wilde pre-Oscar award ceremony at the historical Ebell Theatre. "Yeats, Fungi the dolphin and U2 were not enough," declared Roberts. Rudd went on to admit that he had wanted to be Irish from the age of one and that his father had built a pub in the basement of his house so real that it was as if "a house had been built on top of a pub instead of a pub in the basement of a house." Rudd revealed that his father had died recently and that today was his birthday. With his family origins in England, he later told me that ninety percent of his family lived in Canada and that the small ten percent who had settled in the US spent their free time in Canada. Rudd now has two honorary nationalities, Irish and Canadian.

Not to be outdone, emcee Donal Logue (The Tao of Steve, Charlie St. Cloud),born in Ottawa, Canada, suggested that since Bali saw a significant increase in tourism thanks to Ms. Roberts and the book/film "Eat, Pray, Love" that as a boost for Ireland's beleaguered economy, Elizabeth Gilbert "should write a book called 'Drink, Pray, Love.'"

Actress Sarah Bolger (In America, The Tudors) and casting agents, Ros and John Hubbard (The Commitments, The Fellowship of the Ring, Chocolat,The Hobbit) were also presented with awards. Singer Maria Doyle Kennedy provided the entertainment and with many celebrities in attendance, including Orlando Bloom, organizer Trina Vargo pulled out all the stops in honor of an event which began as an alliance in film between Ireland and the US but has grown to represent a compassionate multicultural alliance.

In accepting their award, Ros and John Hubbard noted that several of the recipients over the years have been Jewish and expressed their belief that "Ireland is a lost tribe from Israel, but they got into the drink and stayed there."

There is no record of Oscar Wilde having visited Vancouver.  In fact, at that time Vancouver was a settlement called Granville, which didn't become a city officially until 1886 when it was named after a Captain George Vancouver who charted the Pacific Coast in 1791.  However, Wilde did visit Winnipeg and had this to say: "So this is Winnipeg.  I can tell it's not Paris."

Of a film award in his honor he might have said, "I love acting. It is so much more real than life."