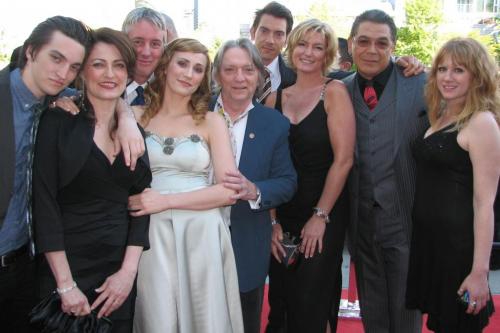 The Leo Awards’ annual Gala Awards Ceremony was held at the Westin Bayshore on Saturday night. The event was a veritable who’s-who and who’s-that of B.C.’s film and television community, with thirty-four awards up for grabs, including the best actor and best program Leos.

The red carpet madness kicked off with the arrival of the Excited cast in a vintage orange VW van. Next up was the cast of Cole, including Sonja Bennett, Richard de Klerk, an avid Trekker equally interested in promoting his upcoming movie Repeaters as in debating Kirk versus Picard, and Chad Willett, who later that night nabbed a Leo for Best Supporting Actor.

Matt Frewer, a self-proclaimed "Leo virgin" nominated for Alice, was in town shooting Eureka. He said he had "fond memories" of his days on the 80s show Max Headroom, and hinted that a remake was in the works. Agam Darshi (Excited, Dan for Mayor, Sanctuary) talked about her latest project, a new South Asian Film Festival, to show Vancouverites "there is more to South Asian film than Bollywood."

Julia Benson made an appearance on the red carpet (and later accepted a Best Supporting Performance Leo for her work on Stargate Universe). Warren Christie, star of the soon-to-be-defunct ABC series Happy Town, discussed his upcoming role in the miniseries Bad Things. And the Wolf Canyon menagerie made a boisterous scene, high on optimism that their pilot, starring Hercules’ Kevin Sorbo, would be picked up by APTN.

Torrance Coombs, nominated for his acting in the short horror flick The Familiar, chatted about his roles in upcoming seasons of Heartland and The Tudors. Young actress Jodelle Ferland, 15, seemed ready for international stardom with her appearance in the third Twilight film, to be released June 30. And 19-year old Calum Worthy, who went on to win a Leo for Best Performance in a Children’s Program, "had an awesome time" filming The Big Year alongside Jack Black, Owen Wilson and Steve Martin.

A highlight of the night was the touching tribute to the late Babz Chula. Lowlights of the night included host Benjamin Arthur prancing around in nothing but his undies, and an openly drunk Lou Diamond Phillips, while presenting the award for Best Dramatic Series, ranting that he "turned down CSI: Miami".