Before The Devil Knows You're Dead 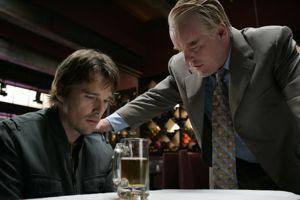 Desperate for quick cash, Andy (Hoffman) a corrupt accountant facing an audit lures his cash-strapped younger brother Hank (Hawke) into a larcenous scheme. They set out to rob a suburban mom-and-pop jewelry store that appears to be the quintessential easy target. The problem is, the store owners are Andy and Hank’s actual Mom and Pop (played by Rosemary Harris and Albert Finney). When the crime goes awry, the damage lands right at the family’s doorstep. The premise of the story lays the groundwork for unavoidable mis-steps, failures and afflictions. Like a floor covered in broken glass, the characters face the painful task of navigating through the mess they’ve created.

I loved Ethan Hawke as Hank, a messed up, dead-beat father having an affair with Andy’s wife. He resembles a sweet, beat-up puppy, shirking against his savage, bulldog brother Andy. In a dog-eat-dog world, Hank is like lunch meat for everyone around him, and his family is the first to take a bite. Andy’s malice is the result of the resentment of his older-sibling responsibilities, and his deep vulnerability. The script gives Andy plenty of soft spots that make his actions excruciating to watch. Albert Finney is stellar as the family patriarch who pursues justice at all costs, completely unaware that the culprits he is hunting are his own two sons.

The film's title is from an Irish toast “May you be in heaven half an hour before the devil knows you’re dead” and is filled with a sense of urgency. The story by Kelly Masterson unfolds in a time-shifting chronology that reveals character motivations, errors and reactions with constantly shifting perspectives. The editing and quick pace of the storytelling beckons us to examine and listen before we make a final judgment.

Masterson studied Theology and wrote for the theatre before writing the feature. In describing his script for Before the Devil Knows you’re dead, he has said:

"I'm fascinated by the folly of human nature. I love characters who we understand and sympathize with, but we just shake our heads at how stupidly they act. This probably comes from my theology background, but I love the big themes of good and evil and how we're such a combination of both. We try to chart a path that's on the side of good, but we all have evil impulses in us."

I won’t say whether Hank or Andy learn from their mistakes as the film progresses, and Masterson doesn’t wrap this one up into a neat bundle. Although most critics harp on Hank’s imperfections, Hank might actually stand on a higher moral ground than his brother. Andy is seduced by him not because he is evil, but because he is weak, easily manipulated, and desperate for everything. Like most Greek tragedies, Masterson shows that human vulnerability and brutality often stem from the same weakness, and suffering is served by those closest to the heart.