The Thursdays Writing Collective, a group of writers from the Downtown Eastside, releases its latest book, "Voice to Voice."

Every Thursday afternoon from September into June, 20 or more writers meet in a third-floor classroom at the top of the windy, worn, marble staircase of the Carnegie Centre. The classes take place in the Downtown Eastside, Vancouver's oldest neighbourhood and one of the nation's poorest.

As 2 p.m. approaches, the writers, most of whom live nearby, are gathering around a large table, talking and laughing. Some have been a part of the Thursdays Writing Collective for the eight years it has existed. They welcome each other, pulling up chairs for those who need assistance, offering seats to newcomers and sidling up to friends.

The classroom is full and lively as Elee Kraljii Gardiner, the director of TWC, writes a word or phrase — the class’s first prompt — on the blackboard. Talking continues, but slowly tapers off to the sound of pens and pencils scratching the white-lined paper, which is offered to all. A breeze carries the sounds of the street below — cars and buses, an occasional raised voice, the murmurings of a complicated neighbourhood with extremes of poverty and humanity. 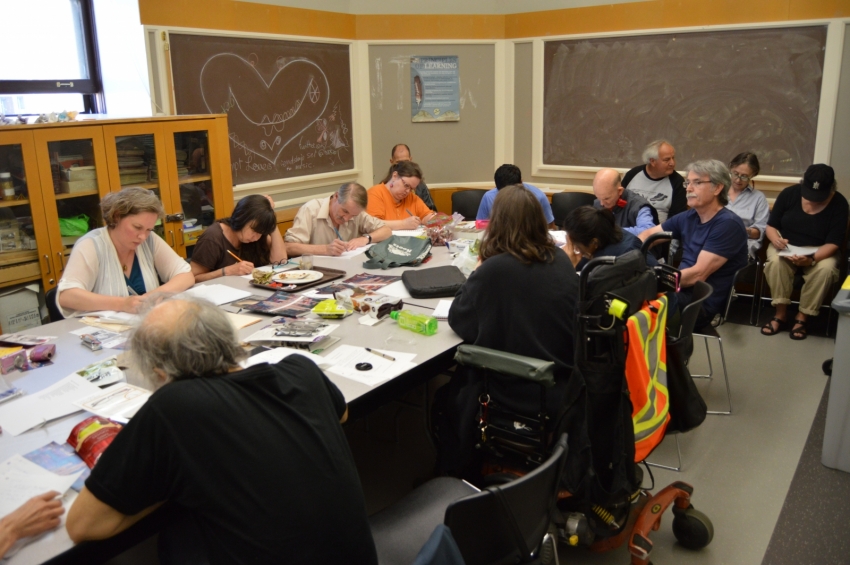 As the writers share what they’ve written, it is quickly apparent they are a talented and creative group, able to spin words quickly and evoke a range of emotional responses.  Comments about one another's writing include references to books and writers, humour and lots of support. The room often erupts into laughter.

“Everyone has a right to be at the table writing with us," says Kraljii Gardiner, who radiates excitement.  "We have a very solid foundation of listening to each other and supporting each other," she says. "That’s sort of the ground-level ethos of the collective.”

Though classes just ended for the 2014-2015 year, there is one more important Thursday to go: the final celebration and launch of their seventh and most recent book, Voice to Voice.

The beautifully-designed book marks the culmination of a year-long collaboration between the TWC, Instruments of Change and the UBC School of Music. Poems, stories, memoirs and music scores represent a transformative year for the writers who worked with graduate students to create 'Art Songs' from their writing.

The Voice to Voice project involved diverse individuals creating something new from traditional forms. Using the writing of the TWC writers, 11 pieces of music were composed for piano and voice and performed at UBC this past spring. 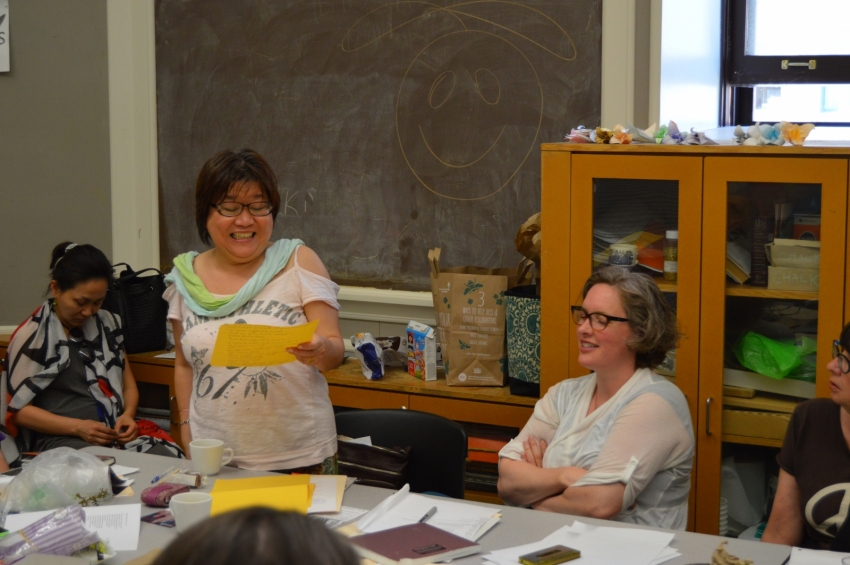 Jan Tse, one of the writers whose poem was selected to become an Art Song, is a lively, small woman, who stands when she reads in class and sometimes on a chair. She throws her head back and laughs deeply and often though, as she explains, she has endured many losses and separations in her life, beginning with her departure from Hong Kong to England as a child.

Tse believes loss is like dominos; one connects with another.  Last year when the Voice to Voice project began, she was grieving the loss of a six-month relationship and used that experience as inspiration for her writing. The inspiration became a poem and the Art Song, “Soundscape.”

“It describes the feeling you have when you are grieving an intense love relationship,” explains Tse. “I used the analogy of a record, 45 to 33, comparing the feeling of grieving to that of entering a trance, of everything slowing, when you are in that space where reality and the imaginary are mixed up.”