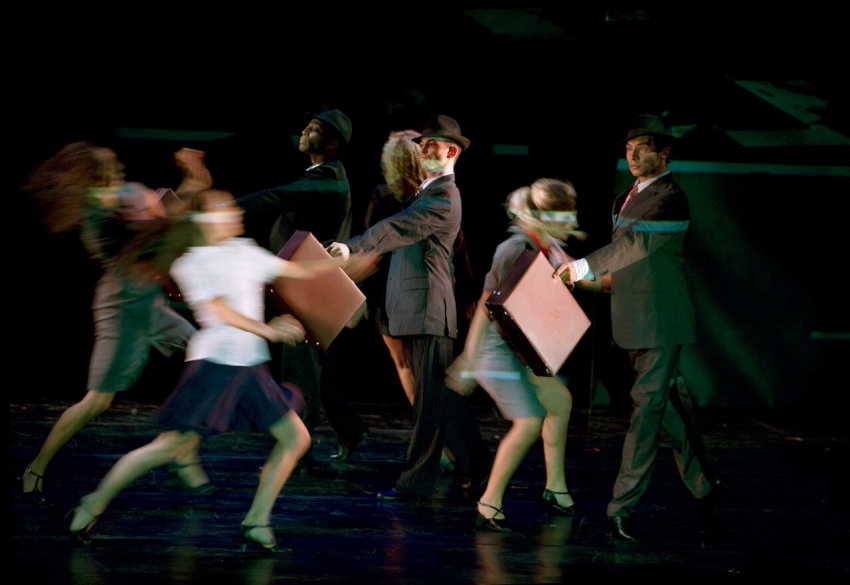 Remember those “Ascent of Man” charts? The classic evolutionary timeline shows how humans purportedly evolved in successive stages from a stunted, hirsute, knuckle-dragging primate into something like a modern hockey yob.

But haven’t we already overtopped that high-water mark? Opening night attendees at this year’s Chutzpah! launch were treated to an update, thanks to the Ezralow Dance troupe out of (where else?) Los Angeles.

The staging amounts to just a set of blank, black panels that serve as mobile projection screens. The panels slide back and forth across the stage to alternately conceal or reveal the eight vibrant dancers, jointly or severally.

Many lightning costume changes along the way, all overseen by dancer Vanessa Nichole, who doubles as wardrobe mistress. Each scene is set to some old chestnut of an orchestral score from everybody’s most familiar middlebrow classics. Clever sound effects and visual transitions link the segments together to maintain a semblance of narrative thrust.

The general, over-arching theme seems to be something about our estrangement from Nature and from each other as we slouch into the Anthropocene epoch. Daniel Ezralow deliberately chose the classical hit-parade score, he explains in the program notes, for “the music to act like an old friend who welcomes you into a new place.”

Maybe not so new a place, after all, at least in Open’s opening scenes. We pick up the saga of humankind’s Ascent back in the 1950’s, when men were Men and women were spunky helpmeets in A-line skirts. This was the much-missed apex of America’s presumptive Greatness, although it might have looked a tad paler than the Ezralow octet, half of whom are Persons of Colour.

We meet these #MAGA paragons first in mock-heroic family tableaux (to the piano accompaniment of a Bach Two-part Invention), and then in a frenetic dressage of hard-charging commuters – men in fedoras and Office Girls in stiletto heels, all to the driving tune of Khachaturian’s Sabre Dance.

The pace reaches such a fever pitch that dancer William Clayton’s attaché case explodes with the sheer propulsive velocity. He sinks to the stage, shedding hat, shoes and tie, as the music subsides into a gentle Chopin Nocturne, underlain with a seething tidal soundtrack. We’re on a beach, apparently.

Clayton grabs a wayward strand of flotsam and tugs to dredge up a knot of kelp; tugs a little more and the seaweed births a mermaid (Kelsey Landers) with whom he dances an achingly lyrical pas de deux until the laminaria fronds threaten to ensnare and drag him under. Whereupon he unceremoniously chucks her off into the wings with a loud “splash.”

…which, in turn, cues up the opening bars of Beethoven’s “Ode to Joy,” as a trio of zoot-suited litterbugs takes the stage, spewing paper rubble. Only to be confronted by dancer Raymond Ejiofor s as a militant janitor with an all-conquering push broom. A kind of class war ensues, with Ejiofor finally dragooning the litterbugs into an ad hoc clean-up platoon.

And so it goes. A wedding scene devolves into a melée that escalates from hand-slapping to arm-wrestling to Marquis of Queensbury boxing to flat-out WWF body-slams. To the tune of Bizet’s Habañera (with its chillingly apt libretto), dancer Anthea Young turns her silk-swaddled body into a battlefield for duelling finger puppets.

Dancers divide into a black team versus a white team – denoted by gym shorts and smeared war-paint – to pit against each other in mercilessly mechanistic combat. The “Knights’ March” from Prokofiev’s Romeo and Juliet sets the clangourous tone, all grinding of gears and hissing of pistons.

…in contrast to the next scene, where the same dancers pose in gold lame suits to recreate the idealized arabesque harmonies of Olympic trophies or limousine hood ornaments...only to be symbolically shattered by a couple of projected bulldozers and compacted into a shapeless lump…

…which, when the panel curtains part, turns out to be dancer Re’Sean Pates in a blaze orange jumpsuit, huddled in a heap, stage centre. He gradually unfurls and tucks the cuffs of his overalls into the tops of his gumboots. The rest of the cast, similarly togged, joins him for a rousing buck-and-wing, a kind of #MAGA Deplorable Line-Dance, to the tune of a boisterous Bach Brandenburg – a new high-water mark in the Ascent of Man.

The last number on the programme – a Strauss waltz – melds from a free-standing vignette into an extended curtain call. It starts with the dancers, stripped down to their skivvies, scampering frantically stage right to stage left and back again, picking up some new random scrap of costume each time they disappear into the wings.

Finally, as the music swells, they line up in a row, each draped like a Maypole in mismatched attire. So they scurry about swapping clothes until they’re each dressed in a solid ensemble of one or another primary colour. Then they scramble some more until they’re arrayed in a canonically ordered ROYGBIV rainbow.

But still no final curtain. Rather, the sliding set panels roll out to mid-stage and the dancers caper behind them, disappearing at one side and re-emerging at the opposite end. And, to further fake us out, each dancer’s moving image (characteristically costumed) is projected onto the intervening screen.

Except the figures start to morph, one into the other, midway on the screens, with the real-life dancers emerging in-the-flesh on the other side, for a bow and applause.

Pure stagecraft magic! Audience never tired of it. Must have gone on for a good quarter hour of thoroughly well deserved ovation.